...is an excellent book written by Bernard Fall about the war in French Indo China in the late 1940's/early 1950's.
I read this in the mid 1980s and got very interested in this very interesting but little-gamed war, which culminated in a huge defeat for the French at Dien Bien Phu in 1954.    I collected and painted a few hundred Platoon 20 minis, which in those days were made from a rather brittle metal.  Unfortunately, I carefully  stored all the minis at the top of a high cupboard, and one day accidently dropped all the boxes from a height of 8'.  Almost to a man, they snapped off at the ankles (and many of the rifles broke).  See Exhibit A, below, for one of the four boxes. 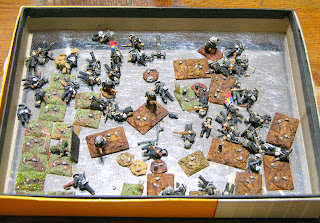 More feet without joy than Street without Joy!
It has taken me around 20 years to overcome the pain and return to the period, but this week I've started to repaint the surviving minis, and I'm going to order a few dozen more (well perhaps a hundred or so...).  I'll either use an adapted Memoir '44 ruleset, or write a simple set myself.  The battlefield of Zama, with some added hills and vegetation, is going to become Route Coloniale 19.
Several things are a lot better in 2010 than 1990; firstly I'm a somewhat better painter now, and have a lot more nice terrain.  Secondly, the 1/72 diecast vehicles that one can buy these days look outstanding; the French transport pool is consequently going to be a whole lot bigger than it was 20 years ago!  Finally there is a lot of great material on the war that wasn't around in 1990, especially this excellent site on the war which has OOB's, which was information I could only dream of, twenty years ago.  En avant!
Posted by BigRedBat at 22:13 8 comments:

My eldest has got a place to read Ancient History at Kings College.  As part of this he will be learning Latin, and this made me nostalgic for the period form 1974-1976 when I did GCSE Latin (my efforts were ultimately blessed with an A!)
The same course I studied (Cambridge Latin), is still in use, and I bought the updated version of the books I used to use way back, when.  I have been thrilling to the old phrases, such as "Caecilius est pater", "Metella est mater" and "Cerberus est canem". 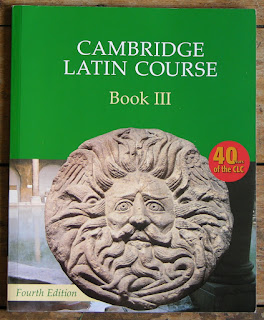 I've been making good progress and am now on book 4; my ultimate ambition is to be able to read the great Latin classics in their original language, such as: 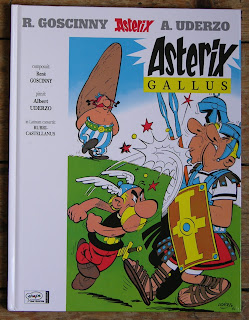 I've made good, if slow, progress with this project.  The first half of the legion (below, clickable) is painted and based.  I still need to add tufts, tonight, and do a little snagging work; then they will be finished.
. 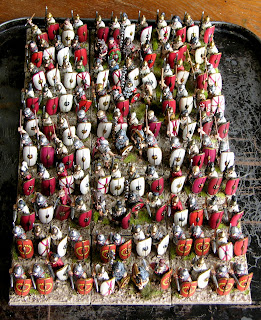 Around half of the second half (not shown) are also stuck onto their bases.  Nick is furiously painting away on a draft of reinforcements, in Essex, which will complete the legion (at 1:20 scale).
In other news, I have been inspired by these stunning photos to dig out a project I last worked on around 20 years ago... more anon.
Posted by BigRedBat at 16:01 7 comments:

Mike of Relic and Keith at Aventine have recently each sent me some of their Tarantine cavalry figures, and I thought it an opportune moment to take a picture of some of the various ancient horses I've been accumulating.  I'd also like the thank Hank at Gorgon, A&A and 1st Corps who sent horses, previously. The below pic is clickable. 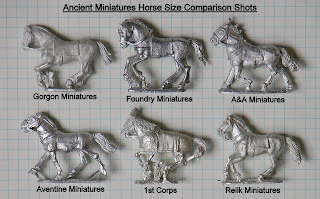 Regarding the two latest arrivals, I'd heard tfrom Mike that the Relic horse (which is I believe is on an eBob master) was smallish, but am pleasently surprised to find that it isn't much smaller than the Aventine Tarentine horse, to the extent that I think one could probably get away with mixing them within a unit.  Which I may do.  It is interesting to note that all the horses are smaller than the Foundry WotG horse, which is now looking very leggy, and I'm thinking that, in the future, I'll reserve those for heavy cavalry.
In terms of style, the Aventine horse has bigger hooves and a slightly larger head than the Relic and 1stCorps steeds.  I rather like this look.  OTOH the Gorgon and Relic horses are bigger in the chest than the others, which feels right to me.
Depending on how fussy one is, several of the horses "breeds" could be mixed within a unit.  In particular  I think that the 1st Corps and Relic would be a fine match for size, and the Gorgon and Aventine would also pair up nicely.

I also have some of the larger Relic Horses that come with Mike's leader figures; these are very nice and I'll take some shots of them, later.

In other news I am dusting off (literally!) some 1980's Platoon20 miniatures with a view to restoring/expanding my old French Indochina units; more anon.  Oh, and I've started a Twitter feed.

Posted by BigRedBat at 17:04 No comments:

This is a link to Greg's site, where he has uploaded his WW1 Adaptation of Memoir '44.

The pdf on the site is a large one (19MB), and in French.  There will be an English translation in a few days.

Recently I messed around with Memoir '44 for my Western Desert variant, which gave a great game.  Greg has got me thinking about writing a variant for the French Indo-China War...
Posted by BigRedBat at 22:36 3 comments:

Email ThisBlogThis!Share to TwitterShare to FacebookShare to Pinterest
Labels: Memoir'44

Mon ami Greg has decided what he's bringing to Salute 2011: surprisingly, but interestingly, a WW1 28mm figure game adapted from Richard's Borg's excellent WW2 Memoir'44 boardgame rules.  This sounds like a fun idea, and I shall definitely try his rules amendments out with my own WW1 15mm figures.

Here is a link to his Gloarmy blog which has pictures of a playtest.
Posted by BigRedBat at 19:31 5 comments:

Email ThisBlogThis!Share to TwitterShare to FacebookShare to Pinterest
Labels: Memoir'44

I mentioned last week that I'd worked out that, with a bit of judicious juggling and outsourced painting, I could knock a legion of 240 recruits together.  My rationale is that the cohorts have been recently raised in a time of crisis.  The armouries have run out of mail, and are issuing shields in whatever colour and condition they have available, and many of the soldiers are in unmilitary whites and other colours.  I rather suspect that a lot of Civil War legions may have looked like this, especially when Pompey "stamped his foot".
I'm making good progress.  Below are the first 5 cohorts, less c 24 figures that are painted (by Nick) and almost ready to add into the gaps on the bases.  I'm freely mixing armoured and unarmoured Foundry minis, with a whole spread of helmet types, and even some Aventines. 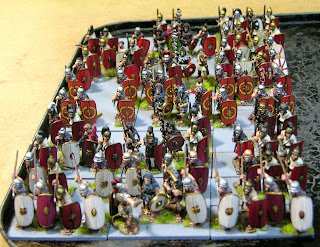 Below are the first batch of 48 minis that Nick painted, together with some shields that I've painted them to match shields on some of the recruits I finished last year. 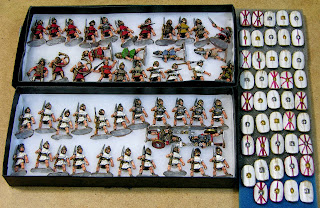 My plan is to polish off these 5 cohorts over the next 2 weeks, and then complete the second batch of 5 cohorts in a similar manner.
Posted by BigRedBat at 20:41 11 comments:

I received a package today from Mike of Relic Miniatures in the USA, with some of his lovely generals (Military Man, and the Gallic chief).  I'm very excited by these models, and Mike has very kindly sent some more samples of his Tarentines and some very nice foot figures, too.  I promise I will take photos over the next few days.
I also received some pics from Keith at Aventine of their own new Tarantines, which look fantastic; I've placed an order, and also ordered some of their new Spartacus range, too (mostly the cavalry). If you've not seen this latter range it is well worth a look as they are on the same Copplestone dollies as the Companion range.
It is amazing; a man waits 20 years for sone nice Tarantines, and then 2 great ranges come along at once.  ;-)
And finally, as icing on the cake my BTD Roman cavalry arrived; a complete order and within 4 weeks of placing it, which is a personal best for them.  Nice minis too.  I'll be back for more.
So excited have I been by the recent plunk of lead on hallway floor, that I placed an order in the Foundry 20% off sale, to celebrate!
Posted by BigRedBat at 21:22 2 comments:

Tonight Ray Lucas kindly invited self and local gamer Nigel along for a 10mm scale Marlburian game.  I grabbed a couple of snaps of the splendid battlefield (but regret not having used a flash).  I was the Imperialists, defending some villages and a stream (foreground), whilst  French  General Nigel was busily outflanking me on my right.  We didn't get all that far, but it is safe to say I was fretting about my exposed wing. 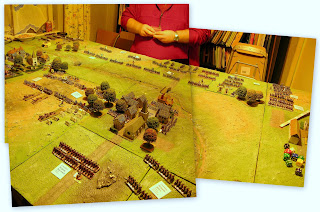 I told Ray that I loved the way the minis were mounted in 6's on 20x20 bases, and that what he really needed was a big 5" hex mat to put them on!  He looked at me like I was a heretic. But I think those battalions would work superbly on some sort of grid using stripped down rule system and card activation.  Made me wish I owned a couple of armies myself, to experiment with.  I shall have to get him down for a C&C game....
Ray's Corporal John Marlburian rules are available on his website.
Posted by BigRedBat at 00:33 5 comments:

A few weeks ago Nick Speller sent me back 48 Caesarian Romans I'd posted to him back in the summer; he's done a lovely job on them.  I mix unarmoured and armoured minis, mount them irregularly on 60x30 bases, and use them as poorer quality legionaries, such as the Pompeians raised.   Here are some I prepared earlier.
I've temporarily mounted these so that I can paint the bases, varnish and add shields. 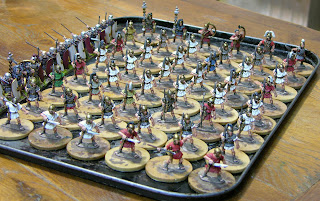 I was planning to mix these with some figures Nick has painted before, to build 6 24-man cohorts.  However, I found myself going through my other units, and have worked out that if I cannibalise four smaller existing units and ask Nick to paint another 32 figures, I could put together an entire 240-man legion.  So this will need to be done... a package is winging its way to Essex and I've started retouching 16 figures in the background.
Posted by BigRedBat at 21:30 No comments: