At last, some ancients!

At last, I've been able to fit some ancients into my busy painting schedule!  These GB Early German minis are ex James Morris and I've given them a little light refresh- new spears and highlights. They are joining a German Late Antiquity army that I'm working on, part of a big new project - of which more, anon.-  They will serve as Alemanni, Goths, Vandals and so forth. More photos when they are based.
Posted by BigRedBat at 12:05 No comments:

Email ThisBlogThis!Share to TwitterShare to FacebookShare to Pinterest
Labels: Germans

At Partizan with Soggy Bottom!

I had a fantastic weekend at Partizan in Newark with chums Andrew Brentnall, Tim Thompson and Ian Notter!

Here are some photos of the game that Ian took. Above are the hard-riding Northern Horse (foreground) and the Troop of Shewe (AKA the Royal Lifeguard) beyond. Many of the former were Catholics so I game some flags with crosses. All photos can be clicked! 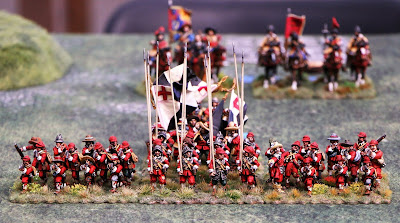 Above Sir Allen Aspley's; my favourite regiment of foote on account of its flags with their lovely gyronny designs. You may be able to make out the King and his bodyguard of Gentlemen Pensioners, beyond.  Below, right, Devereux's take to the field for the first time! I failed to point them out to Charles Singleton, which was a shame, but I'll take a better photo in due course. 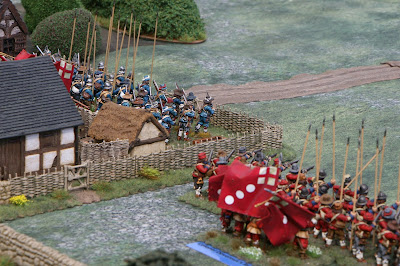 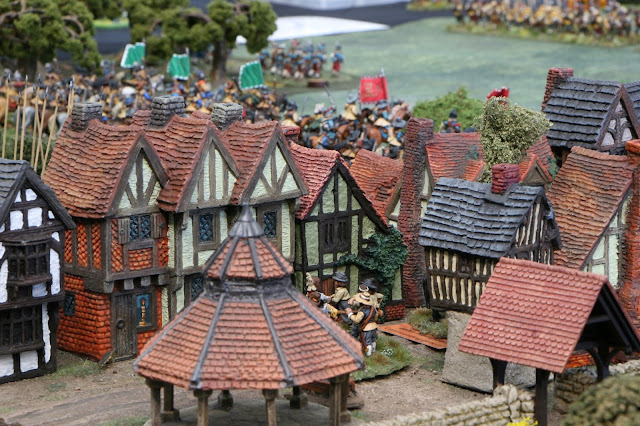 Above, a view over Soggy Bottom. That's the butter market in the centre foreground and the Lych gate of the church in the right foreground. Below, the famous London Lobsters. I got to play these in the second battle; they withstood all attacks and eventually rode over their exhausted opponents! 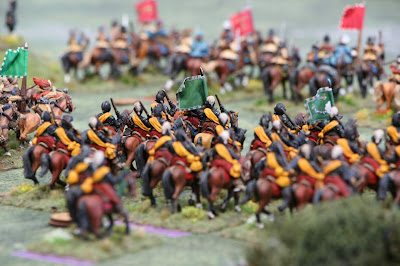 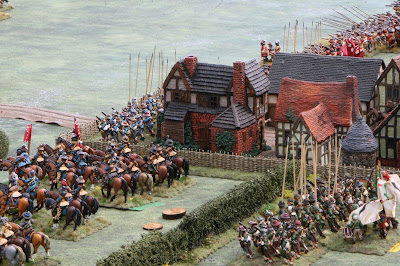 Above, stalwart defenders of Soggy Bottom. In the second game Colonel Brentnall led these forward to the great discomfiture of the Royalists, or at least that is what he claimed in dispatches... Below, a regiment of Royalist horse 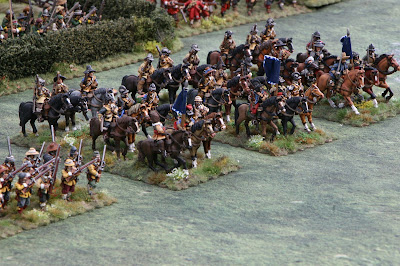 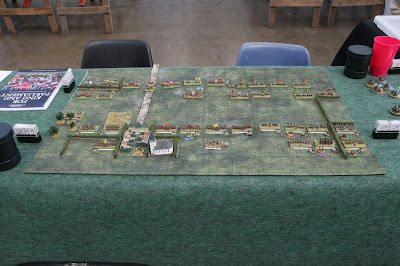 Above and below, Andrew brought his small but beautifully formed Soggy Bottom with him, which was much admired! Some visitors rushed straight across to the adjacent Baccus stand! I had a nice chat with Pete Berry about the Thirty Years War. Indeed many people asked about this conflict... I'm sorely tempted... 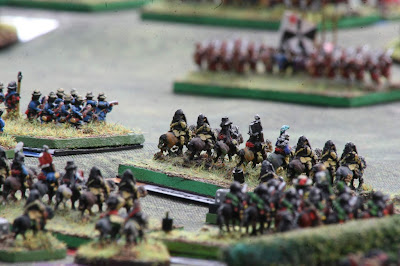 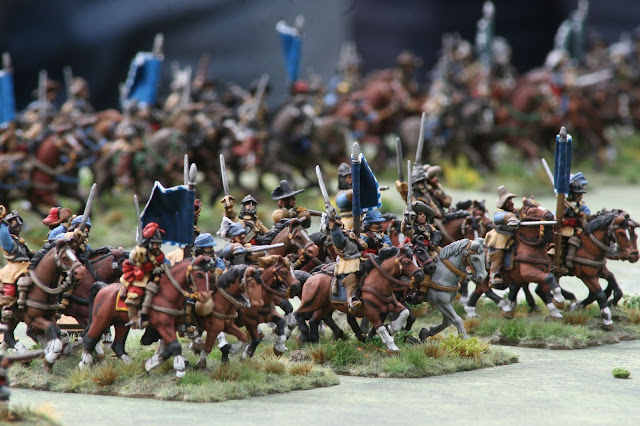 Above are regiment of the Oxford horse, and below a closeup of some Parliamentary "Dutch" horse. 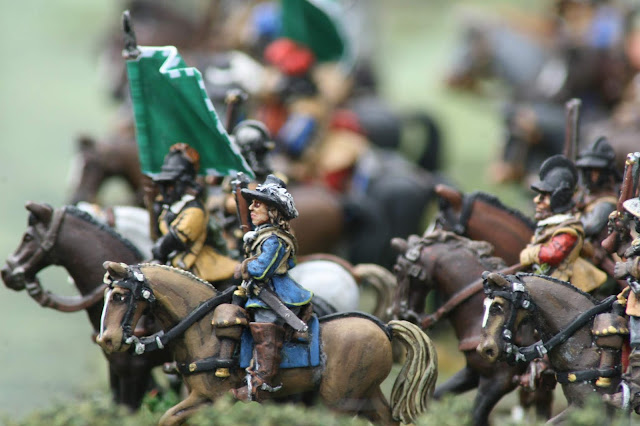 The 28mm minis are mostly Bicorne and the buildings, Hovels. We used Andrew and my "For King and Parliament" rules; fought the battle twice, with Parliament winning both times (narrowly).

Partizan was a great show- again! It's always terrific to catch up with so many mates. Huge thanks to the lads and to Simon Williams and Andy Green for all their hard work, and a big shout out to everyone who came by the table! Also many thanks to Tricks and Laurence for organising, and the people who brought playing cards (I left all of mine, aside from a Seven of Clubs, at home).

We'll be back again with an ancients game at T'other Partizan, in August, and hope to take Soggy Bottom to Colours and SELWG later in the year.

Posted by BigRedBat at 18:11 No comments:

I ran out of time, before Salute, and didn't manage to complete the basing of the Soggy Bottom horse. Yesterday and today I have been frantically adding tufts- at least four per mini- rather more than 1000 in total. Time permitting I will dry-brush them, later. Next I need to add weeds and flowers to some of the units. I've also added flags to the four regiments that lacked them- if manners maketh the man, cornets definitely maketh the regiment.

The four "Dutch" regiments are at the back and eight "Swedes" in front. This looks like quite a lot of horse, but to achieve a sensible horse:foot ratio to complement the infantry regiments that I have finished or mostly finished, I estimate that will I need to recruit around the same number again.

Oh- and the best music I've found for tufting- Bob Marley. The base line really helps with the rythmic action!
Posted by BigRedBat at 11:02 No comments:

Reinforcements for Sunday's Partizan game. These are the horse holders for Colonel James Wardlawe's dragoons and will sit behind a hedge, all day, doing absolutely nothing, except for looking pretty. Minis are super Bicornes, which a few Redoubt horses for variety, painted by Shaun McTague.

There are enough horses to mount one of my two units of dismounted dragoons. Next I'll need to ask Shaun to paint 18 mounted dragoons. Dragoons are a harsh mistress; three units need to be painted to put one on the table! 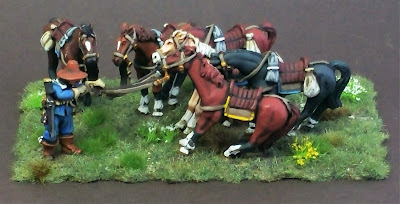 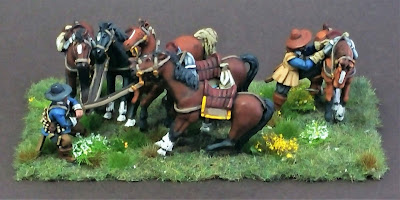 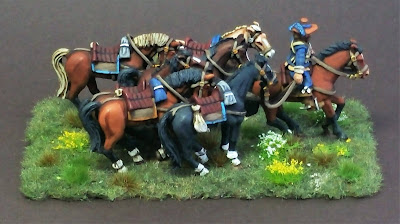 Andrew and I hope that some of you will see our Soggy Bottoms at Partizan on Sunday- we still have slots for players for the afternoon game- drop me a line if you'd like to play!
Posted by BigRedBat at 14:55 No comments:

Coming to a Partizan near you, soon.... 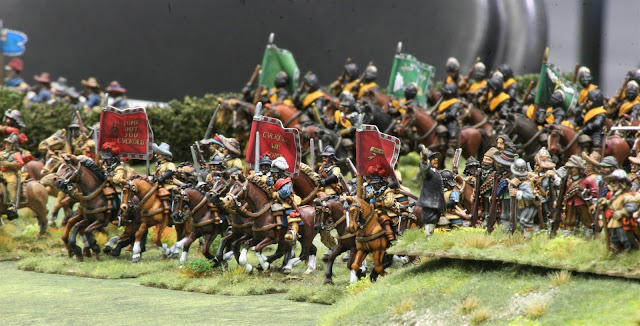 Andrew Brentnall and I will be bringing our Soggy Bottoms (same battle, two different scales) to the Partizan show in Newark on Sunday May 20th. If you would like to see how the For King and Parliament rules play, or better still join in and turn a few cards yourself, please drop me a line at the email address to the left and I'll book you in. Games will last under two hours and no previous knowledge of the rules is required. 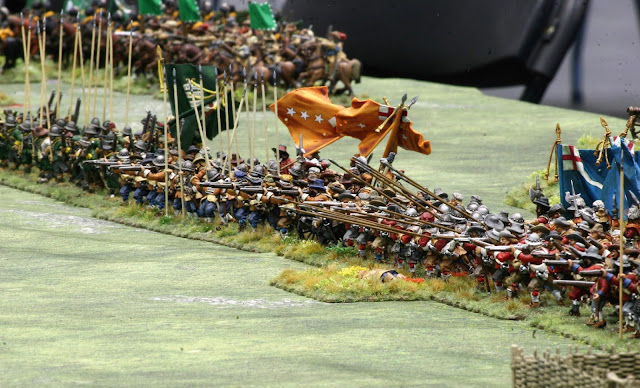 If you've not encountered the new rules yet, they are a fast play ECW set that work for all scales (2mm to 54mm).  Played on a big (and usually not-at-all-obvoius) grid, with dice and cards, the rules are easy to understand and very decisive- some might even describe them as brutal. 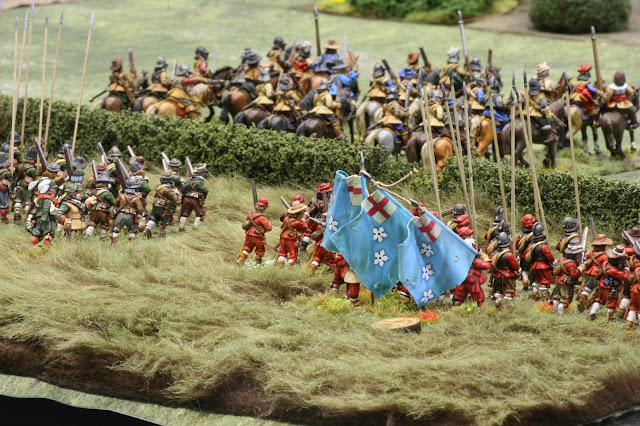 In other news... as my ECW forces have now reached "critical mass", I've started a pair of new ancients armies for a very large new project, of which more, anon. It is likely to take 18 months or so before it hits the tables and it should be quite a spectacle!
Posted by BigRedBat at 16:37 No comments: