The Black Bands of Giovanni 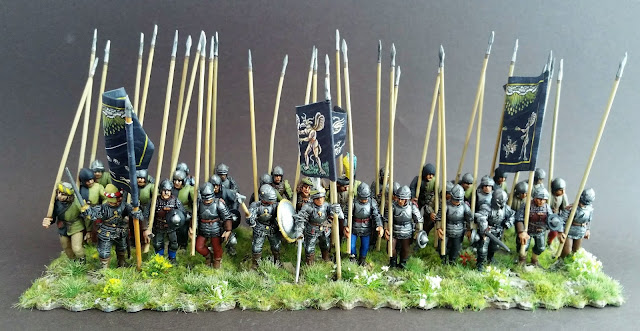 This is my first proper Renaissance unit, representing the pike element of the Bande Nere of Giovanni de' Medici, as they might have appeared in the 1520s, after his death. Uniform details for his "orphans" are scarce, other than they wore predominately black mourning clothes. They are a sombre unit!

The superb black flags, with demons, are from Peter's flags on eBay. The minis are all Perry plastic mercenaries, painted by Shaun McTague, Richard Hampson-Smith and myself. I based them on my favourite wobbly-edged Batbase, the FK&P06, which I designed for the ECW but which turn out to be good for pretty much everything. I can field two of the elements on a 15cm grid, or all three on a 20cm grid.

Below is a shot including a command stand. I am currently raising the Bande Nere arquebusiers- I plan to field at least twice as many as there are pike. I am also sorely tempted to add a fourth rank of pike, and some mounted infantry. 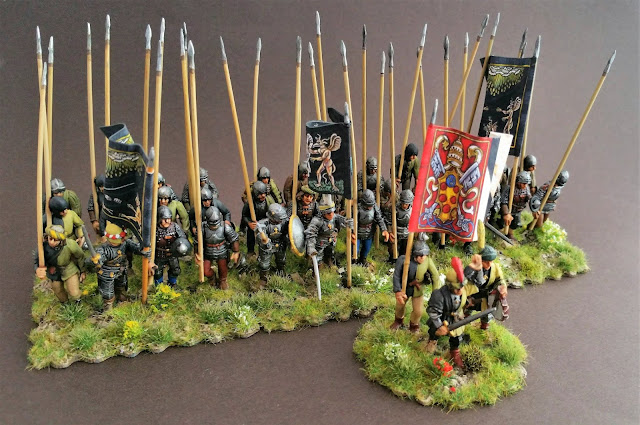 I've no particular idea what I'm going to use them for, yet, but they are too good a unit not to represent!
Posted by BigRedBat at 12:19 18 comments: 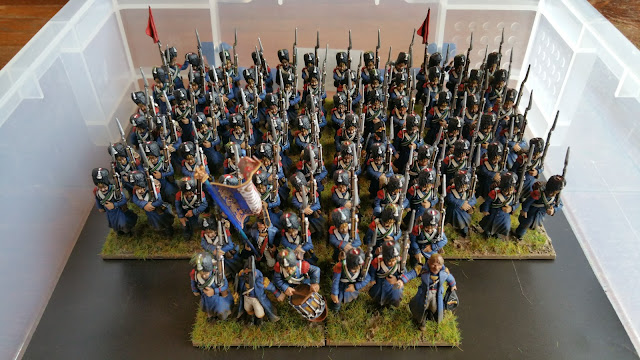 Here are another detachment of La Garde just about to march to Leven via Newark.  These grognards are exceptionally well travelled, having flown to Paris where they were painted by chum Lionel Bechara, posted to Scotland where chum Saxon Dog detailed and weathered them, then back down to me for basing* and now back up to join their comrades for the coming Waterloo game in Glasgow. There will be around three times as many when they are all finished and assembled.

*I didn't have time to tuft- I'll leave that to David, who can take proper photos.
Posted by BigRedBat at 11:32 7 comments:

On my basing trays! 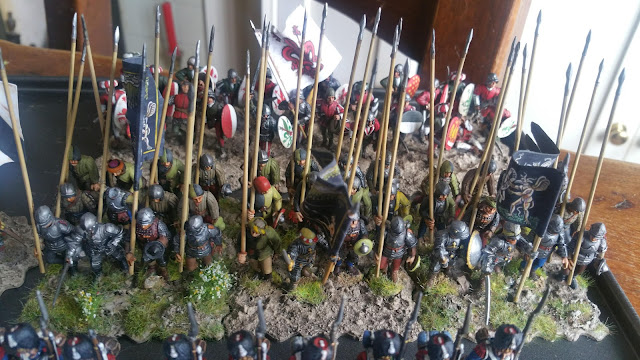 Mea culpa- it's been almost 4 weeks since my last post. Since Salute I have been painting and basing various things- mostly late medievals- that have been stuck in queus behind my Celts. It's great not to be working to a punishing deadline! Above are some Bande Nere de Giovanni pike, Perry plastics mostly painted by Shaun McTague and Richard Hampson Smith. I discovered today that my chosen yellow-ochre and black colour scheme is a little too... yellow. So I will mix in some more black-garbed minis. Behind them you may be able to make out some Florentine swordsmen.

Below are a pair of command stands for Florence and the Bande Nere, respectively. They need to be flocked, of course. I've used lovely flags from Pete's flags on eBay, which are essential purchases for the Italian Wars. 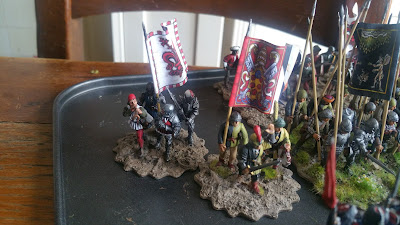 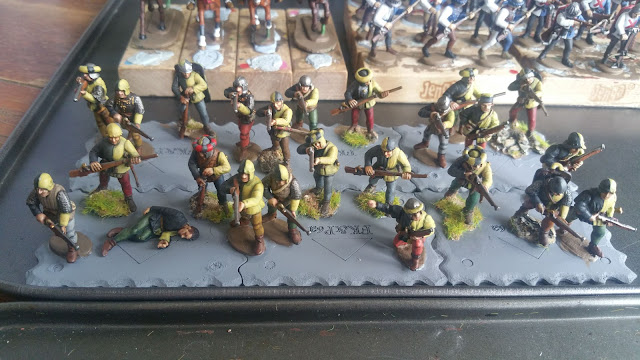 Here are some arquebusiers- again, Shaun's going to paint some more in black, and I'll remove around half of the above from the bases and replace. The bases are shallower Batbases from a new set I've had made. Below are four Florentine mounted crossbows, I'll need to get some more done because I want to be able to deploy them in big units of 12. If one is painting plastics, there's no excuse for stinting on the unit sizes! 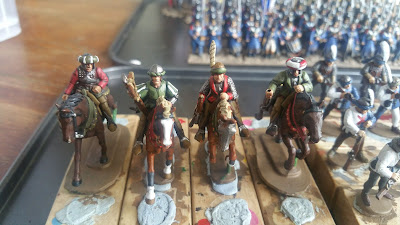 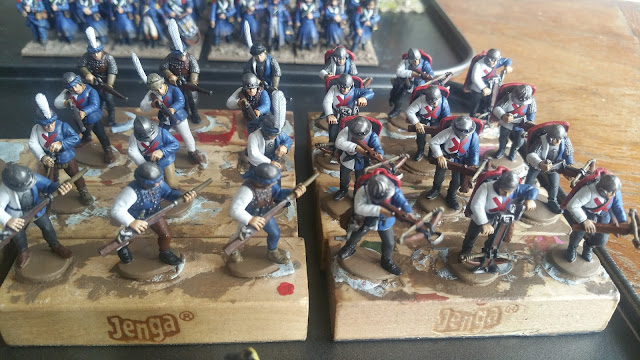 Finally for the Medieval period, we have above 24 Burgundians painted by French chum Lionel. I've added a highlight to the flesh and will give them a very gentle wash- I don't need to do much because they are superb paint jobs- there will be better pictures when they are based.

One reason I'm furiously basing late Medievals is that I'm hoping to get a couple of spare armies ready for the To the Strongest! "Knight Fever" tournament at the London GT in September. If you've not yet entered this, please give it some thought- it'll be a great day at what I suspect must be the world's largest wargaming tournament. The details of the tournament can be found here- it's in Edmonton and the To the Strongest! tournament is a one-day event on Sunday 15th September- so you have more than enough time to get an army in the field!

All you need is 130 points of Medieval figures- perhaps as few as 70-80 miniatures- which you could get from perhaps 5 boxes of Perry (or Fireforge) plastics costing less than £100 at a show. I will likely play my Italian Condottieri again- they have proved to be tough opponents in the last two tournaments- although I am very tempted by the pretty Burgundians... 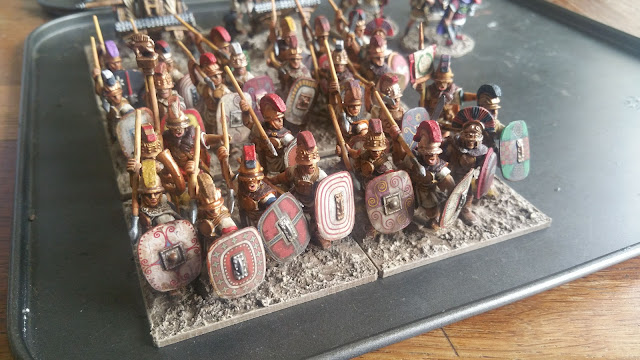 Above and below are some minis that I'm basing for chum Howard Litton- mostly Aventines. Their Volscians, above, are a stunning range that are all too rarely seen on the gaming table. Below are some Aventine Polybian command and Warlord artillery beautifully painted by Shaun Watson. 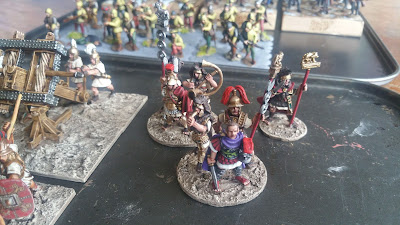 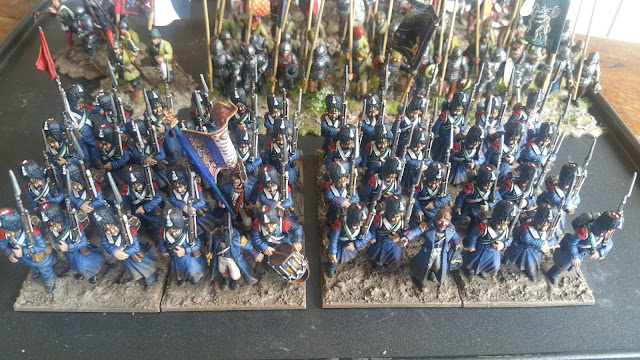 Finally, here are some Victrix Garde painted by chum Lionel in Paris, detailed and highlighted by David Imrie in Scotland and based by me in London. Once I've flocked them, they'll be heading back to Fife again and David can show photos of the finished units. We need to do six more of these units for the big game in June...

That's all for now! It's just struck me that perhaps 90% of the minis on this post are plastic- that's pretty much a first for me!
Posted by BigRedBat at 11:53 11 comments: