Not much Nellie related progress, because I'm trying to clear the painting table of the 54 Legionaries that seized control of it around 3 weeks ago. Consequentally, I won't be able to start the elephants for a few more days. However, as a taster, here are some of the primed crewmen (all photos clickable). 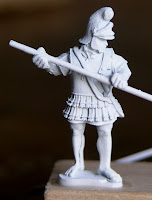 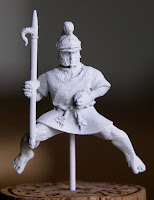 The miniatures took a while to prepare, because there is a little assembly required (heads and weapons), and because the metal from which they are cast is fairly hard and needs a bit of work when filing. There are mould lines visible on some of the legs, presumably because the mould-halves are slightly out of alignment, but this won't matter as they will be hidden in the Howdah. Aside from that, they came out very nicely; the detail is extremely crisp. The separate heads (which Mario kindly sent me a small bag of) came into their own, because they enable each figure to be different from the next, and the heads can be posed looking downwards. I sat each of the heads in a little greenstuff and superglued for safety.

I have taken three minor liberties with the elephant models that Mario sold me. The first was to replace the cast pikes provided with wire spears. I did this because I hate cast spears (because they are too thick and yet bendy), and in this case I felt they were too short to enable the crewmen to engage enemy on the ground. The second was to replace one of the crewmen with a spare Empire Model, for the sake of variety, and the third was to swap the shields for Crusader shields, because they are larger and will look more imposing, and because I already have appropriate Crusader transfers. 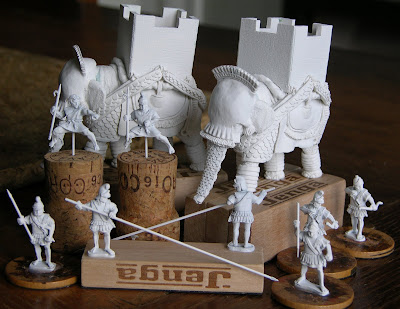 Posted by BigRedBat at 23:46 No comments:

On the painting table...

These are the 2 units of recruit legionaries I've been working on over the last month; not far from completion, now. Just shields, varnishing and basing... more anon.
Posted by BigRedBat at 09:57 4 comments: 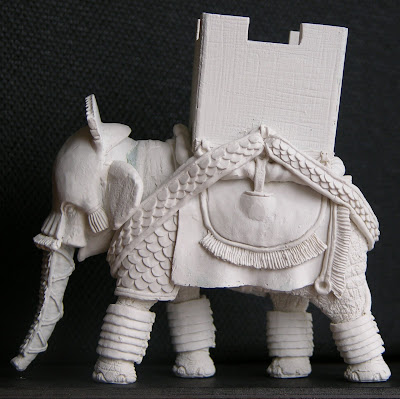 This series of posts is goint to be a mix of review and painting log for the Empire Models armoured Successor elephant.

The Empire Models Successor Elephant stands a mighty 54mm at the shoulder, is 85mm long from tip of the trunk to hind feet and is 84mm to the top of the howdah. The model comes with 4 crewmen, which I'll deal with in a later posting.

The elephant is very easy to assemble, just requiring the head and metal trunk and tusks to be attached. I have left the tusks off for the time being, because it will be easier to paint with them absent. I had to do a small amount of filling on the join of the head and body, as you'd expect. There were a number of tiny airholes in the casting; less than I would have expected, though, and I easily filled these with greenstuff. One very minor issue with the model is that there are small crevices along the edges of the howdah; I filled these, too. After assembly I primed white. 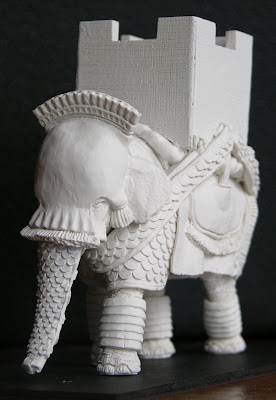 I wouldn't claim to be expert on elephants, nor Successors, but this is an imposing beast. I estimate that, compared to a Foundry World of the Greeks miniature, it must represent a creature around 10' to 10'6", at the shoulder, not far off the maximum 11' height that Wikipedia suggests Indian elephants grow to. 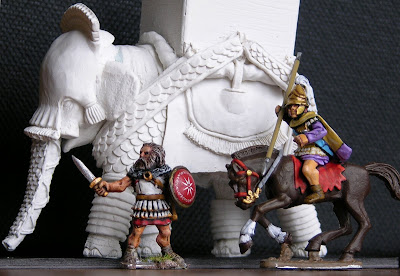 Paul was asking on TMP about the size of the model. Now I don't have a Newline elephant to compare it with, but I've taken a shot next to a couple of Foundry figures. This is a big bull, and isn't going to be very useful if you have 25mm scale phalangites; it'll dwarf them. I think, though, that a couple of these will make fantastic centrepieces in a bigger 28mm Successor army such as Foundry, Empire or Polemarch.

In general the model is very well cast, and the detail is extremely crisp. The scale armour and the draperies are beautifully depicted. I'm very much looking forward to painting them (I have two)... going to be a big job, though, because they are fantastic pieces that will warrant careful attention!
Posted by BigRedBat at 11:13 3 comments: 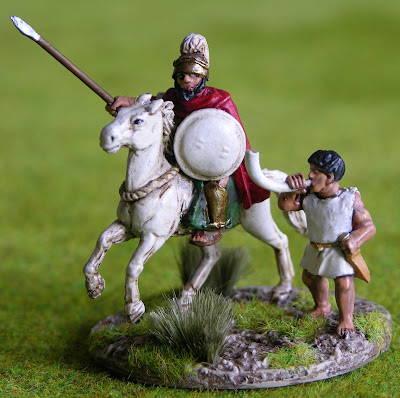 This is the Numidian King Masinissa, who changed sides before Zama and thus sealed the fate of Carthage. He's based on a Connolly reconstruction, which I think was sent to me by Allen around a year ago. I think he is a more historically correct figure to lead my Numidians than the Juba model.

The mini is a converted A&A rider on an eBob Crusader horse. The hornblower is Crusader.
Posted by BigRedBat at 14:42 2 comments:

Wot I am Painting this Week

This (clickable pic) is what I'm up to at the moment; one of my new, smaller 48 man legions and a couple of Aquila command stands. This legion will be a recruit legion, as used in the Gallic or Civil Wars; my second.

About half the minis will be ones I picked up from Pool-of-Paint on eBay, and partially repainted (shields, weapons), and the balance are being painted by me from scratch. Should take a couple of weeks...
Posted by BigRedBat at 13:45 5 comments: 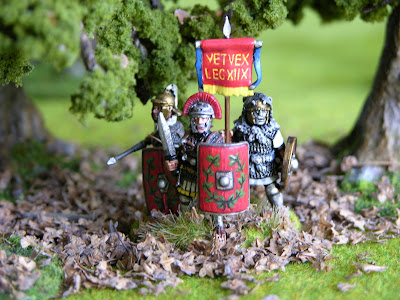 What with it being the 2000th anniversary of Teutoburger Wald, I thought I'd make up a special command stand as a small personal memorial. This is based on the one of the late lamented Angus McBride's super-dooper illustrations, and depicts Marcus Caelius, who was a Centurion of the XIIXth, and who was killed there. 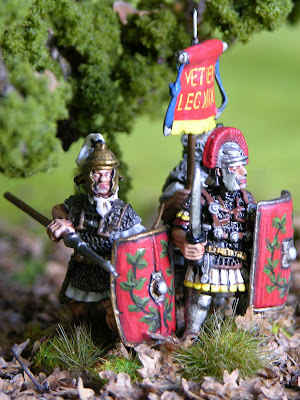 I'm pleased with the standard, which I made from scratch. The two figures are Crusader, with a converted Foundry Caesarian on the left. 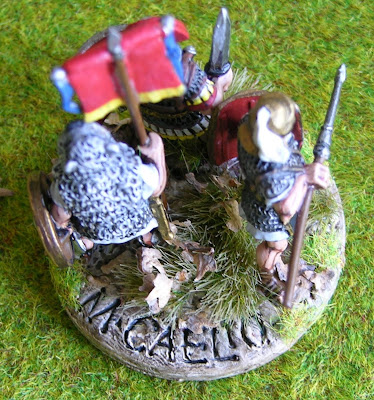 This is an aerial view, which shows the writing I inscribe on all my Command stands.
Posted by BigRedBat at 12:17 10 comments: 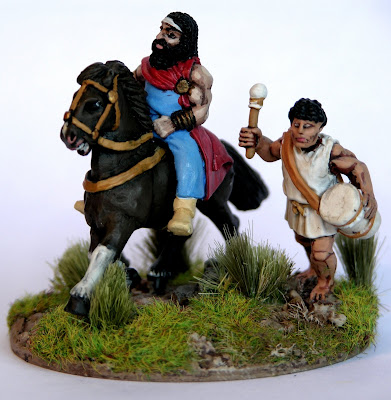 Juba commands one wing of my Numidian horse. He's a GB casting on an A&A horse, and his drummer is from Crusader. I painted this one, Greg! ;-)

I'm not entirely satisfied with the model, as I picture him in Roman/Greek generals gear, and the blue tunic didn't quite work. But I like his beard.
Posted by BigRedBat at 11:31 3 comments: 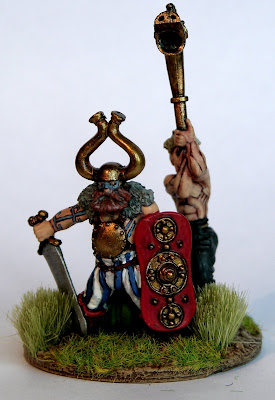 Today's post is a Renegade Fantasy figure, that I liked enough to allow into my historical Celtic army (the armour and shield is a little OTT). He is a repaint of an ebay purchase.
Posted by BigRedBat at 10:04 5 comments: 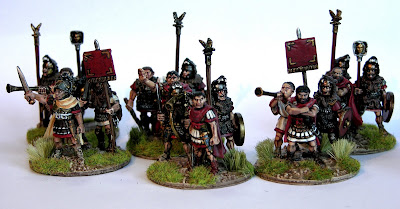 These are my Legion Command stands; 4 have aquila and the other two vexilla. I'm going to need another 4 or 5 to meet my new 10-legion plan. Most figures painted by Nick; some by myself A grim looking bunch...
Posted by BigRedBat at 13:57 11 comments: 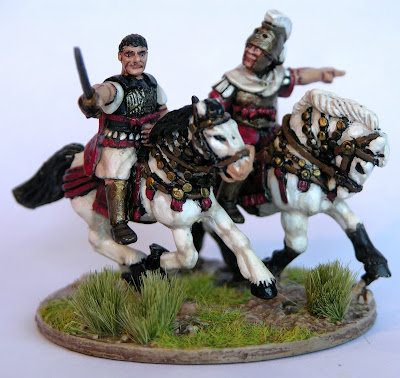 Fought with Caesar; fought against Caesar (no less than 4 times, came close to defeating him at Ruspina). Gripping Beast riders on A&A horses; more sterling paintwork from Nick Speller.
Posted by BigRedBat at 14:58 No comments:

Commander of the Armies of the North... 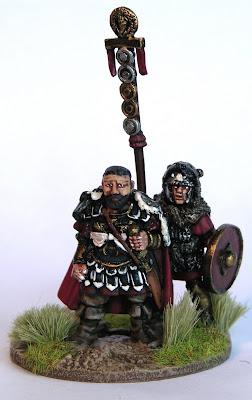 Second in my series of characters, is Maximus, mounted and dismounted. This is a Jim Bowen figure, again painted by Nick Speller. I feel the minis are a little crude, but Nick certainly made a fine job of painting them! 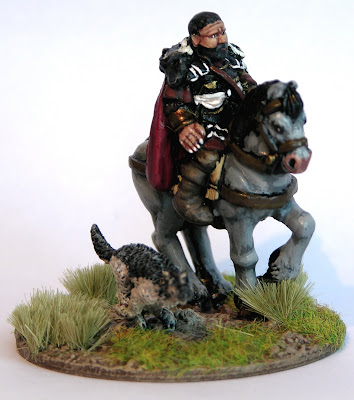 Imaginatively, two out of the four generals in my campaign called themselves Maximus. :-)
Posted by BigRedBat at 13:23 4 comments: 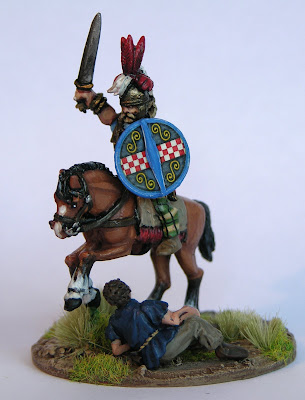 Whilst I'm painting my newly-levied Roman Legion (which is going to take a few weeks), I'll display a series of photos of command stands from my armies.

Thia first depicts Boduognatus, King of the Nervii. I converted the mini from a Foundry German, giving him a Renegade head and making his horse rear slightly. Nick Speller painted him beautifully, and I based him. He usually commands my Gallic cavalry wing.
Posted by BigRedBat at 13:19 2 comments:

Legions of the Planned...

Last year I settled on a structure of 24 minis to the Cohort (1:20 representational scale). However, it has been becoming clear to me that I also want a structure that will enable me to field battles with up to ten Legions to a side. With ten Cohorts, and 240 minis to each Legion, I’m clearly never going to have ten of them!

So I’ve decided to create a parallel structure, with smaller Legions of 51 minis; a 3 mini command stand and 2 x 24s.

This should be fairly straightforward to do. The main implication is that I’ll need to paint 3 extra Cohorts to match “odd” cohorts, like the blue Caesarians I posted recently. I'll also need an additional half a dozen command stands, with shield designs matching the legions. Then I should be able to field 10 of the smaller "legions"... which would mean that I could field the OOB for Caesar's larger Gallic War battles (or one side of a big Civil War battles). I think it’s do-able…
Posted by BigRedBat at 23:06 6 comments: 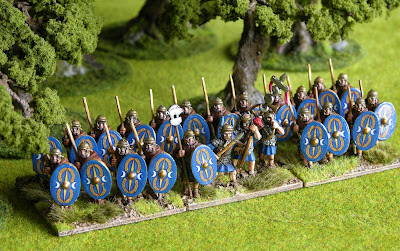 Hi, this is the latest unit to join my legions; the 2nd Cohort of Gallic auxiliary infantry, originally raised in Lugdunum (Lyon) during the reign of Augustus. The unit served for part of its life in the Roman army in lower Germania, fought in the 69AD civil war, and later ended up in Britannia. The unit still lacks its mounted component (6 cavalrymen), which I'll have to sort out later.

I bought these minis, painted, on eBay, and then substantially repainted and rebased them. They are all Black Tree figures; I think that the BTD Auxilia are really nicely sculpted. If you like these, you might like to see my other (Foundry) Auxiliary Cohort:- http://bigredbat.blogspot.com/search?updated-max=2009-01-22T07%3A57%3A00-08%3A00&max-results=7
Posted by BigRedBat at 11:37 2 comments:

This is the first installment of the first cohort of my EIR legion; eventually it will have 10 stands (each stand represents a century). The figures are from BTD (although the command are from Foundry and Crusader)- not the world's greatest sculpts, but they made a pleasing change to paint from the scores of Saleh EIRs I've painted previously. I replaced the BTD shields with Foundrys, because these are a better shape IMHO. The BTDs are a mm or two taller, which seems appropriate for the first cohort!

Here's a comparison shot of the BTDs next to some Saleh Foundrys. I have 6 cohorts of the latter completed, which puts me slightly over 2/3 of the way towards completing the legion (42 out of 64 legionary stands).
Posted by BigRedBat at 14:48 2 comments: