On Sunday I motored across to Peterborough for the Hereward show, where mates James Morris, Mog and Matt were putting on a spectacular game using "To the Strongest!". I travelled up with mate Dug who very kindly took these photos.

Our "Tribola" game featured an attack on a Roman column by Lusitanian freedom fighter led by Viriatus. I won't write much about it as I understand that James plans to publish the scenario in one of the magazines. As well as James and Mog's minis, the game featured James' superb mountain that was used for Keren, admirably re-purposed as well as some new rocky outcrops. 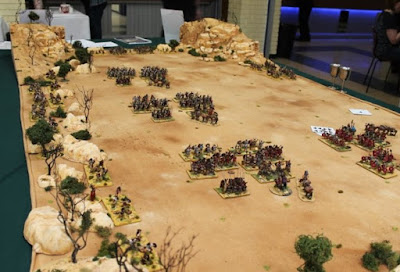 In the game a Roman column of four legions has been lured into a trap by vengeful Lusitanian rebels. You may just be able to make out the grid which was marked with tufts; the shot is taken at the start of the battle. 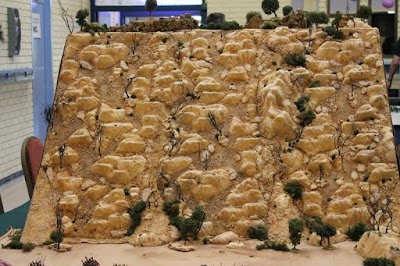 James' mountain towered over the other end of the table. It is absolutely huge and the build quality is superb; the design is really well thought out with panels bolting on to a wooden frame. 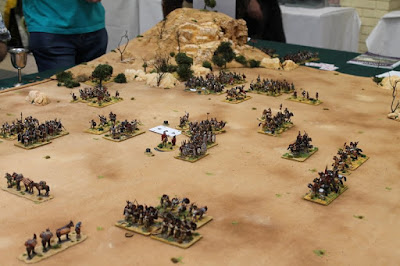 Above, a shot from late in the battle, when the action became confused as Lusitanian horse harrassed isolated Roman units. The minis were beautifully painted by James and Mog. Below, I contributed a few units of Roman baggage to the game- pack mules from Tiger Miniatures, some lightly converted, temporarily based to match James' terrain. 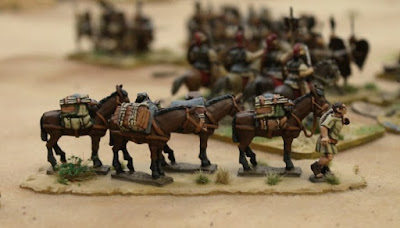 We played the scenario twice and it was a lot of fun. We used the "experimental" Polybian list which has more resilient Roman units that performed well even when attacked from multiple directions- "Form orbis!"

This was the Hereward show's second year and somewhat larger than the first. The venue was very good and the event has become a regular in my gaming calendar.
Posted by BigRedBat at 10:28 No comments: