These proud (and clickable) guardsmen are half of the two Praetorian cohorts I hope to deploy at Partizan.  They were superbly painted by Nick Speller; I added the transfers and touched up the shields.  Hopefully Nick is beavering away at the command stands... when I base the second lot, I'll add the static grass.
Steve Saleh only sculpted a single pose of Praetorian, so the unit is necessarily very uniform!  IMHO this uniformity doesn't matter quite so much in the case of spit and polish guardsmen.
Courtesy of recent purchases, I should be able to deploy a couple more cohorts next year (and I'll certainly be buying the later EIR Praetorians from Aventine, too, when the standing poses come out).  Happily, a lot of Praetorian cohorts were deployed in 69AD...
Posted by BigRedBat at 20:00 5 comments:

Yesterday I started work on this piece from Monolith Designs, which is destined to be the temple of the twins at the eponymous battle of Ad Castores.  I fancied a smaller temple, without pillars, as the battle was fought in the countryside. 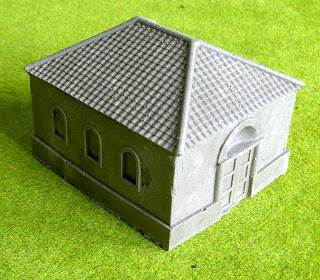 I really like the design of this piece, although there are a lot of tiny air bubbles on the tiled roof (you can see them if you click).  I've filled the worst of them, and am hoping that the remainder won't be particularly noticeable, once painted.
Posted by BigRedBat at 11:03 9 comments: 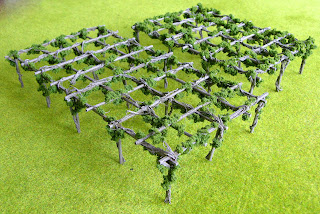 I’ve finished 2 of the four vine-stake terrain pieces- it took a surprisingly long time to carefully flock them, do please click for a closeup.  I’m very pleased with how they came out.  I’ll have all 4 ready for the game at Partizan on 2/9/12.
Posted by BigRedBat at 01:02 16 comments:

A huge thank-you to Legatus Hedlius, of this parish, who responded to my recent appeal, by selling me (at a modest price) no less than 132 more Foundry Saleh EIRs, around half of whom are quite nicely painted, and also some BTD command figures.  In due course I should be able to carve 2 cohorts each of legionaries and auxiliaries out of these, and a cohort each of Praetorians and archers.  Great stuff!
If anyone else has any spare Saleh Romans (especially the auxiliaries or Optios/Centurions), do please drop me a line.
Posted by BigRedBat at 09:41 4 comments:

2 cans of spray paint and 4 coats of drybrushing later (do click for a better view)... 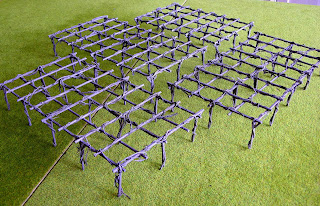 The jute string works very well for the woodier vine stems.  Now I need to await an order of clump foliage!  In the meanwhile, I had better get back to painting some Romans...
Posted by BigRedBat at 16:31 13 comments: 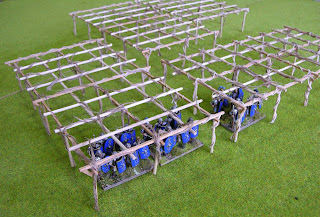 This is the second installment of my vineyard project, with some figures added to give an idea of scale.  There are now 4 blocks of vine props, and I've added "vines" made from unravelled jute twine, soaked in white glue (have a click, for a closeup).  I just need to add a few more vines to the block in the foreground, and then I'll get on with painting.  Ultimately I'll add clump foliage which will make them less stark.
Posted by BigRedBat at 16:11 8 comments:

A brief diversion into terrain, part I

For the game at Partizan (of which more, anon), I'm going to need to make up some vineyards, of a type used by the Romans- tall poles, on which the grapes would grow, overhead. A Syrian neighbour built something very similar in his garden, one year.  These need to be able to accomodate troops but also to store away neatly, hopefully 4 to a 7L Really Useful box. 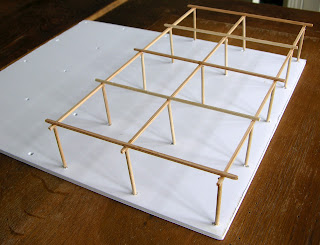 I pushed bamboo skewers through a 5mm sheet of foamcore, on a 70mm grid, to make a template.  I then cut 45mm lengths of skewer as the uprights, and cut beams of spruce and bamboo to go across them.  I stuck everything together with wood glue, it is reasonably rigid, and will become more so, as I plan to reinforce it. 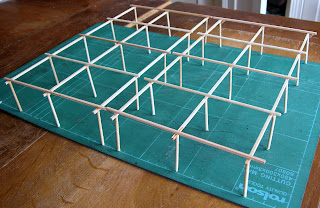 Above are the first 2 frames, of 4 planned.  They are going to be freestanding, so troops can easily be placed under the vines.  A promising start!  Also a nice change from painting and basing.
Posted by BigRedBat at 11:40 8 comments:

As part of my continuing Early Imperial Roman project, I’m after as many of the Wargames Foundry Early Imperial Romans as I can lay my hands on (especially the Auxilia with the oval shields).  I wonder whether any of you have any, spare, in your lead mountains?  The Saleh miniatures are the ones with the cast-on shields (see below, legionary centre in top photo, or auxiliaries on the flanks in the bottom photo), and are larger than the other Foundry Perry range.  They are going to look like hulking brutes if you are collecting Warlord or the smaller Perry range... 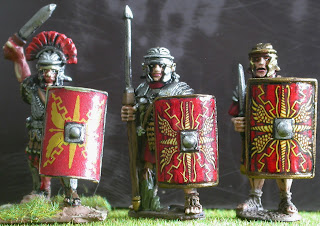 I’d be happy to buy, or swap for miniatures from my own substantial and varied lead mountain.  Unpainted would be good, but will also look at painted ones.  If you have any, do please drop me a line at the email address on the front page of the blog!
Posted by BigRedBat at 21:18 7 comments:

Figgybloggy Greg organises an annual parade of miniatures to coincide with Bastille Day.  It only just dawned on me that today is the very day!  Vive la France!
Last year I posted my Early Imperial Roman Legion, and today I've decided to parade my mostly-new auxiliary forces in front of my newish buildings from Paul Darnell.  The pics aren't my best ever, but they do give an impression of what I'm up to.

Above are the 13 cohorts of auxiliaries, the ex-marines of I Adiutrix and my first Ala of Auxiliary cavalry.  This is clickable! 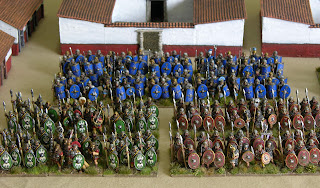 Above front left, two British Cohorts, and front-right two German.  Behind them are the newly-prromoted marines of I Adiutrix. 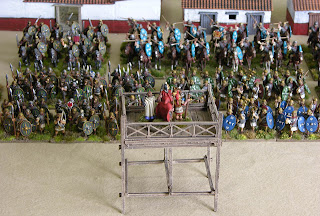 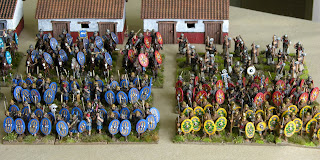 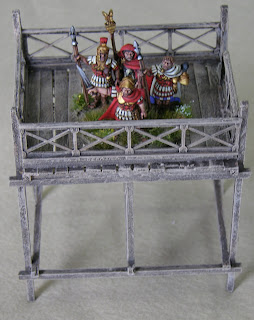 Next year, hopefully I'll stage a rather smaller but no doubt very shiny parade of Praetorians and associated troops.
Posted by BigRedBat at 17:24 19 comments:

Latest recruits to the Army of Germania Inferior; two more cohortes peditatae from the Sugambrorii tribe, painted by Dr. Simon's mystery painter (highlighting and basing by me).  I'm now just about finished with Auxiliary infantry (have 13 cohorts), but may perhaps do one or two more cohorts before Partizan, if time permits. Do have a click, they look quite acceptable in closeup. 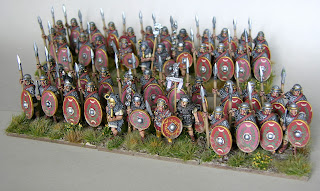 I love these (mainly) Saleh minis (if anyone has any sitting around unpainted, I'd love to do a swap).  I've mixed in a few Foundry and Crusader command figures, and a couple of BTDs.  The (ahistoric) unit standards are Aventines' Hercules (who the Germans worshipped), and a boar.
Posted by BigRedBat at 11:17 6 comments: 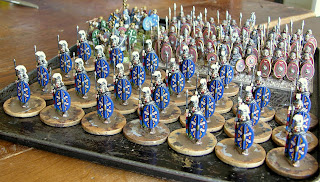 Mate Nick Speller recently sent me the first of two planned instalments of Praetorians, and I just couldn’t resist getting transfers onto their shields (on which I still need to do just a little highlighting and detailing).  These are all Foundry models from the Saleh range, which I do love passionately, even though there are no varied poses.  In the background are the newest two cohorts of auxiliaries which I need to grit my teeth, and flock!
Posted by BigRedBat at 08:52 12 comments:

In the manpower crisis following the crisis in Dalmatia in 6AD-9AD, and Teutoberger Wald in 9AD, Augustus raised perhaps 30-40 independent cohorts that didn’t form part of the legions.  Some of these were entitled Coh. Ingenuorum Civium Romanum (free-born Roman citizens) or Coh. Italica Voluntariorum C.R.  (Italian Roman citizen volunteers).  According to Cheeseman, the former were recruited from Roman citizens, and the latter were recruited from freedmen, who were not eligible to serve in the legions.  These retained a higher status than auxiliary units, being paid a donative equivalent to that of legionaries, in Augustus’ Will.

Over time, it is thought that recruitment standards were relaxed and non-citizens were recruited (slaves or foreigners), who received citizenship after twenty five years service, as if auxiliaries.  Paradoxically auxiliary units that performed exceptionally well on campaign, were granted Roman Citizenship, which is why many have C.R. after their unit name. 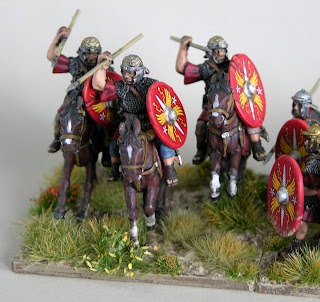 I don’t believe that anything specific  is known about how C. R. troops were equipped, relative to other Roman forces.  From Instinct, I’ve chosen to give this particular unit, which was based in lower Germany,  the same red tunics I give most of my legionaries (rather than the off white most of my auxiliaries get), and a legionary shield design that LBMS conveniently makes to fit an oval shield.  I also gave them a legionary signum. 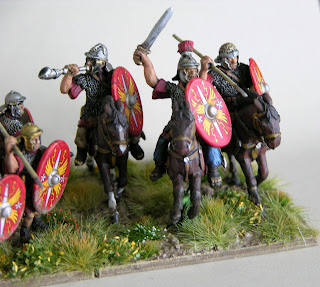 Most of the miniatures are Black Tree, except for the Centurion who is the Warlord mini that came with Hail Caesar, and two Foundry signifiers and a cornicen.  I did a little light conversion work including a couple of head swaps.  I particularly pleased with the way that the cavalry contingent came out, as all were badly painted, and some horses broken at the ankles, when I got them.  Unfortunately the photos aren't the best; they don't bring out the rich reds of the shields.  You'll have to come to Partizan to see them. 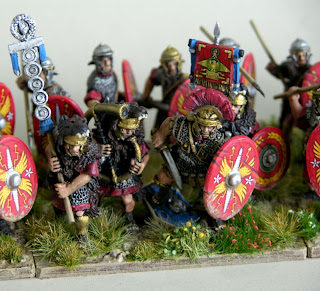 I’ve been basing a couple of regular auxiliary cohorts in parallel with these, of which more, anon.
Posted by BigRedBat at 16:07 10 comments:

2 more cohorts painted by Dr. Simon's mystery painter, who has handpainted all the shields, very nicely.  I'm going to do a little shading, weathering and paint the bases in an earthshade; hopefully basing, from tomorrow, in time for Greg's parade on the 17th.  These are going to be German cohorts.  Only one more cohors pedita remains to be painted after these, for the game... although I did buy enough BTD minis to complete one more cohort at a later date, in the sale, this week.

Today I'm also basing the red-tunic auxiliaries- photos in a day or so.
Posted by BigRedBat at 11:30 11 comments:

Five long painting sessions has these boys painted up, barring shields (the transfers are hopefully on the way from LBMS). 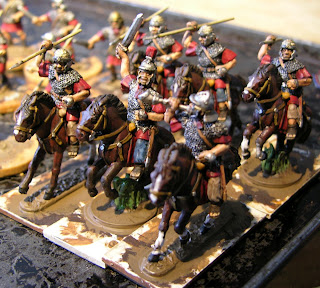 This is the first time I've painted the cavalry contingent up alongside the unit's infantry, I quite enjoyed it, although 30 is a lot of minis to handle at the same time.  I've used a lot of Devlan Mud; am belatedly becoming quite attached to it.  I think the weather might be just about good enough to spray a coat of gloss varnish on them...
Posted by BigRedBat at 10:20 6 comments: