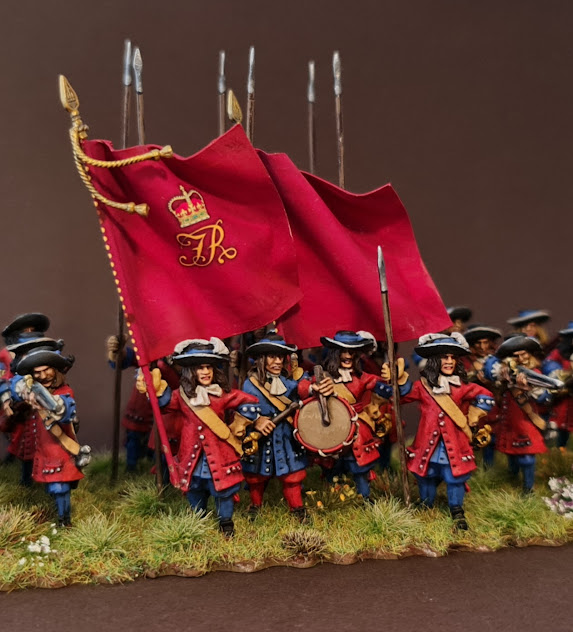 Here are my first battalion for my 1670's project, the 1st Foot Guards ca. 1683. Strictly, they are outside the 1667-1672 period that I'm concentrating on but I had them mostly painted and couldn't resist finishing them off. The minis are North Star 1672. Unfortunately they have been in my "reserves" boxes for so long I can't recall who the original painter was, but chum Dave Millett very painted up a few more to match and I detailed and finished them. The flags are from Flags of War. The bases are my FK&P06's and they were beautifully flocked by my chum Ian (I tufted). 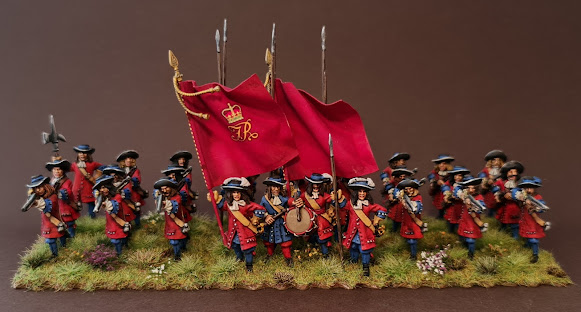 This will be my personal standard for the period, 28 foot on three stands 19cm wide, a practical size for gaming. The third rank is largely superfluous but helps to make the unit look a little more like the period engravings. I hope to eventually raise 30-40 battalions, and as many cavalry regiments/batteries, primarily Dutch and French (including Swiss and Walloons) but also Spanish, English and Scots. Eventually I'll need to write a set of rules or perhaps an add-on to the For King and Parliament set.

If anyone has any spare 1672 minis, painted or unpainted, I'd be keen to buy up or swap for them to swell the ranks, you can email me at the address on the left.

In other news, I've recently had a couple of big restocks in the BigRedBatShop and now have pretty much everything in stock, particularly bases and the splendid coloured activation chits.

I have quite a few units underway and hope to be able to post one a week for the next month or so.

Those look stunning! A beautiful red 👍

Whoever painted them they can certainly put down a very deep beautiful red.