Here are Kirke's Lambs, more formally known as the Queen Dowager's Regiment of Foote, hard-bitten veterans of the Tangiers garrison. There was nothing lamb-like about their behaviour after the battle of Sedgemoor, when they ruthlessly hunted down fugitive rebels and executed .

The historian Lord Macaulay describes the eponymous Colonel Percy Kirke as "a military adventurer whose vices had been developed by the worst of all schools, Tangier.... Within the ramparts of his fortress he was a despotic prince. The only check on his tyranny was the fear of being called to account by a distant and a careless government. He might therefore safely proceed to the most audacious excesses of rapacity, licentiousness, and cruelty. He lived with boundless dissoluteness, and procured by extortion the means of indulgence." He was personally responsible for ordering the hanging of at least 100 rebels. He famously promised to spare an innkeepers life if his daughter slept with him. She did, but in the morning awoke to find her father's corpse hanging from the window.

I bought around two dozen of the painted Front Rank minis on eBay, and some more (including the super Colonel Kirke) from a chap called Malcolm (sorry don't know the surname). The splendid flags are from Iain at Flags of War. 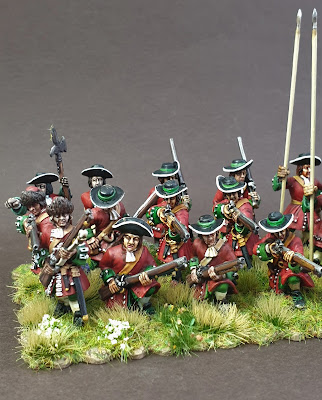 Here are the shotte. I messed up by using only flintlock-armed minis; at Sedgemoor, most of the Lambs would have carried matchlocks. Still, though, not too shabby!

Finally, I really like this shot, from the rear. I mixed madder, a brownish red, into the paint for some of the minis' tunics, as it was likely a major component in the dyes of the time. The bases are of my own design, so that I can swap out the command stand and even the pike, for more shotte.
Posted by BigRedBat at 12:34

Superb work from the best period ever!
John Child's research on Mr. Kirke suggests that his violent behaviour is somewhat overrated, even doubting the veracity of the inn-keeper story.

But then history (and thereby wargaming) are full of revisionism.

Beautiful work Simon, from my most fav period!

Yes Duc, I take some of the Kirke stuff with a pinch of salt.

They are fabulous Simon,

Really captured the look with them!