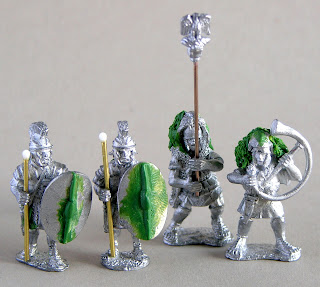 I finished a few of the other minor conversions for my Praetorian cohorts; 2 optios on the left, and an aquilifer and a cornicer for a Praetorian prefect stand I plan make up (Sejanus, anyone?  I'm a huge I Claudivs fan).

The two optios are lightly converted BTD figures, with brass hastile and spines added to their shields using a green stuff stamp.  I've simply added manes onto the two Aventines on the right. 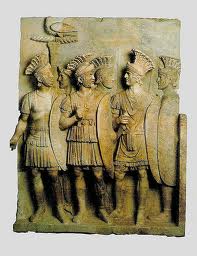 An aquila, I hear you say, but surely the Praetorians weren't a legion?  This is true, they were 12 separate cohorts, but one does often see an aquila in the background behind Praetorians.  My guess is that there was a Praetorian aquila that was brought forth when the cohorts were gathered together.  If anyone has any info on this, I'd be very interested to hear it.  This aquila is cut from one of the A&A Praetorians, it is quite like the ones one depicted in the relief (left).

I envisage raising a small Praetorian corps consisting of a couple of units of guards, a cohort of  Vigiles Urbanes,  the cavalry I finished earlier, and a turma or two of German Bodyguards.
Posted by BigRedBat at 18:17

Nice...you definately have to have some german body guards..and a John Hurt caligula ala I Claudius!
Cheers
paul

Nice work; that frieze of Praetorians is so cool. Best, Dean

Nice work on the manes. I'm not convinced by the shields.

You'll see Greg; they will look da biz with a transfer on!