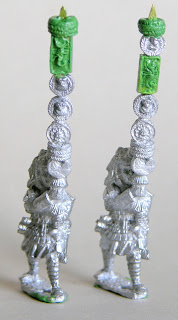 I've been planning a couple of cohorts of EIR Praetorians, for a year or so, but I've not been able to find suitable signifers wth the very tall and distinctive Praetorian standards.

Praetorian standards were taller than regular cohort standards, and much more highly decorated, with wreaths, images of the Imperial family, plaques and so forth.  They were so heavy that, during one long march, the signifers were given permission to load their standards onto carts.

The closest I've come to suitable figures are these A&A Praetorian signifers.  The figures are OKish; I don't like the later-period leggings or sleeves, but I may be able to conceal the former with greaves.  I've removed the original tops of the standards, and lenthened them to the maximum height that will fit in my storage boxes.  I've added a plaque to each, with a (rather crude) scorpion on it. They'll do!

I have a little more conversion work to do on some other figures, and then both cohorts will be off to Nick for painting.
Posted by BigRedBat at 16:19

Email ThisBlogThis!Share to TwitterShare to FacebookShare to Pinterest
Labels: Praetorians

Meaty looking things Simon if its all going pear shape, rather handy mallet.

How did you do that? It must have been very fiddly..
Silflor tufts? Good idea but at the rate I produce units it would turn out a bit expensive :-D
Cheers
paul

Thanks Paul and Ray!

Silflor isn't too bad if you buy the big packs; goes a long way!

Drill and fit new shaft!! How small was the drill bit!? and more importantly..how did you hold the bits to be able to drill them?
Cheers
paul

Hi Paul, around 1mm, using a hand held bit. Hold figure in one hand, drill in other, drill. It's pretty easy, and with practice one can drill out a the middle of a cylinder as small as 1.3 mm diameter or so, so in this case my new brass shaft is drilled into the middle of the old one.

You guys with your easy peasy plastics; don't know you are born! It's a man's world, metals. ;-)