This third and final part of the After Action Review, focuses on the action in the centre.

Above is a view from behind the enemy's lines, showing their uphill attack against the Limitae and Bacaudae that formed our centre.  The attackers were very numerous, well trained and armoured.  Luckily our troops were uphill, and somewhat buoyed by the death of Majorian in his duel, so it was a relatively even struggle.  The shields of the enemy Italian Field army made a brave display (below); all beautifully hand painted.  I can make out V Makedonia in the second photo, below. 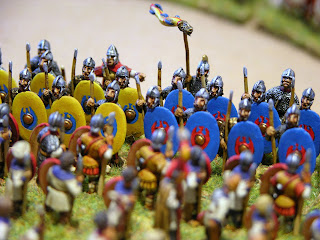 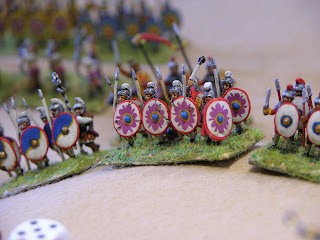 My immediate opponents, the Comitatus of the recently deceased, now divine Majorian, rolled a maximum 5 for combat on their average dice, so our Hero needed a good dice roll to break through them.  Luckily Venus provided this (below), and we were soon galloping past the left end of the enemy infantry line, in the direction of Mediolanum! 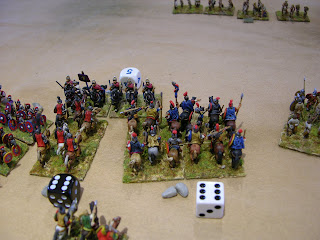 With the gap clear, another of my cavalry units was then able to charge the flank of the enemy infantry, and roll up troops that were already exhausted by their struggle for the hill (below), and the battle was decided! 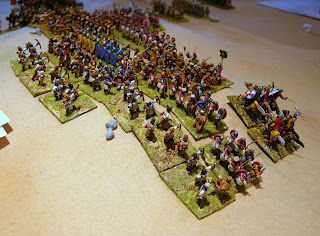 Below is the only shot I took of the far wing of the battle, where the light cavalry fought each other to destruction. 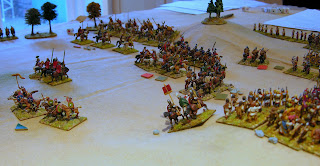 The game was very enjoyable, and I found that I had a fair grasp of the rules by the end.  Simon was a great host, and out opponent, Dave, very sportsmanlike.  The figures looked splendid (loads of converted 15mm figures, beautifully painted, sheer madness!) and I really covet a large army of Perry 28mm Late Romans, now.  So it might prove to have been an expensive visit!

If you want to have a crack at the rules (which are well written, and beautifully illustrated with pictures of Simon's minis), you can download them for free, from here.
Posted by BigRedBat at 18:14

Great looking game, the figures are great, I like the shield with the arrows embedded in them, that's a great touch.

Yes Ray, I saw that. Battle damage on a 15mm shield! Bonkers. But lovely.

Nice; those hand-painted shields are impressive - so many, so well painted. Best, Dean

A great write up Simon and a very enjoyable game. I now have the scenario and orders of battle posted on my site at http://tinyurl.com/5sj4r6u
And thanks everyone for the kind comments on my figs!
Simon

Thanks Simon, it was a very enjoyable game!

Very nice description of the battle. I have a question: how much time you took a game?