This is the second part of a three part write up of the game we played at Simon MacDowall's, yesterday.  Part I is here.  I'll apologise that it is rather Visigoth-centric; I had my work cut out and couldn't always follow what was going on in our centre and left (although there will be more shots of the action here, in Part III).

So you'll recall that our brave Visigothic horse were drawn up on the far right of the line, facing no less than 6 units of well-hard Germanic shock horse ((background, below), who were poised to drive our less numerous (and if I am honest, rather less effective) horse,  from the field.

I had a cunning plan, though; use my foot to hold off the horse, and re-deploy all my mounted, behind their screen, to the centre, where they could hopefully hit the advancing enemy foot in their exposed flank.  Below you can see me part way through this manoeuvre; the foot are advancing, and inclining to their right, to fill the gap left by my horse, and my horse are scurrying along, behind them. 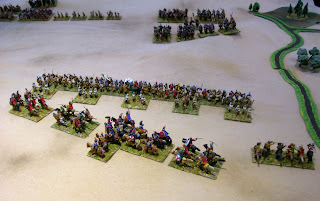 We were very surprised when most of the enemy cavalry ploughed frontally into our infantry,  (below)! 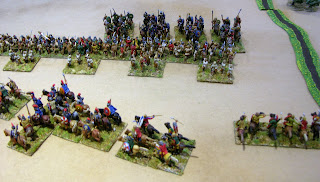 Luckily, they were driven back by our stalwart foot (the below view is taken from behind enemy lines).  The heaps of rocks indicate the discomfort of the recoiling enemy horse, who were badly knocked about. 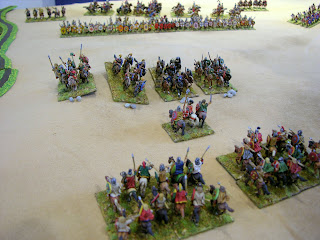 Below, I turn up in the centre, with my Comitatus and horse.  The lines of infantry are on the point of clashing.  The small unit of enemy horse, riding hell-for-leather towards my cavalry units, are the Comitatus of the dead Emperor Marjorian; sworn to perish in combat.  The charging infantryman is a marker to show that I'm inspiring my own Comitatus, ready to charge. 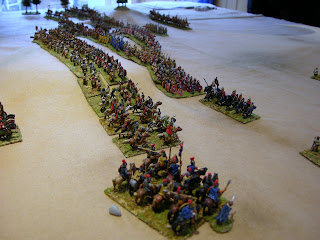 And below the clash of impact.  The fighting was heavy and I suffered a serious wound; this would have been enough to slay a lesser man, but had little impact on my ability to command (as I'd luckily rolled a 5 for command at the outset).  Eventually we triumphed, and rode forwards over the bodies of the slain, into the gap between the enemy centre and their left... 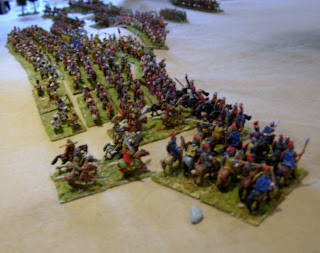 And of course at this point your comitatus goes into blood frenzy and runs off after fleeing enemies instead of wheeling into the centre.

At least, that's what usually happens to me!

As it should be, it seems to have been very hard to restrain victorious cavalry.

What fun!
Give my regards to Simon.

Looks great fun! I particularly like the way the units aren't all strictly trammelled into DBA-style rigidly straight lines.

Fantastic figures, when I think about my figures this teeth begin hurting me. :-)
I greet and waiting to the third part of the report.