These are my recently reconditioned 20mm Platoon20 French Indo-China War infantry.  The paint jobs are a bit basic but they look good from about 30cm away, so who cares!  They are organised in 2 companies of 2 platoons each (apparently the French adopted this organisation because of a lack of men and junior officers).
I've gone with a representative scale of 1:4. 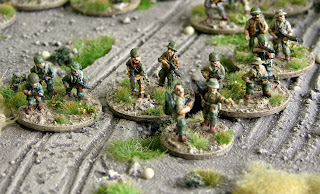 Next I need to paint a second company of Viet Minh so that they have someone to fight, and a hex-based rule system.  I am hoping that I'll be able to get a relatively simple system working; somehting more complex than Memoir '44, but simpler than Tide of Iron, and with local flavour.
Posted by BigRedBat at 11:38

Thanks Dean! Apparently uniforms in units were very mixed, indeed, until the US started supplying the French, later on. So I've mixed lots of colours and some camouflage patterns.

When I do para's, next year, they will be much more uniform.