For some time I've been in the process of raising my Second, or levy legion, and I'm delighted to say that it is finally ready for action!
My concept is that the legion has been raised in haste during an emergency, and equipped with a mixture of shields and equipment recently drawn from civic armouries.  Around half of the figures are unarmoured.  They are in looser order than my other legion, and I think of them as being less well drilled.  The picture is clickable.

The legion includes 243 figures; mostly Foundry (or Companion) Caesarians with a few nice Aventines and a couple of Crusaders.  The majority of the figures were painted by my friend Nick Speller (thanks Nick!), and the remainder are from various eBay purchases, or painted by me.  I varnished and based everything (and I can tell you that there's a lot of Silfor on those bases!).

Above is the legion from the front.  I went with a mixture of red and off-white colours to bind everything together.  A few of the shields have slogans painted on them; I intend to paint some more on later. 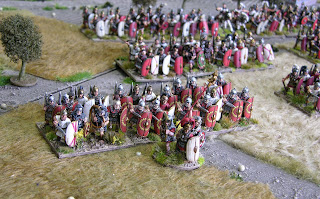 Above is a picture of the First Cohort.  Most of the figures in this unit came from a single eBay purchase, and I decided to retain the pretty shield designs.
I'm really pleased with these, and look forward to gaming with them on Saturday.   I'll have some more interesting posts over the the next few days...
Posted by BigRedBat at 16:08

Very nice, Simon! And I think I recognise the terrain boards from Zama?

They look fantastic! Nice work. Zama board seems to get better every time I see it, must be like a good wine ;)

Hi chaps, thanks. Yes those are the Zama boards Paul. They are going to see a lot of action, one way or the other. I just bought some banana trees to turn them into the Vietnamese central uplands! ;-)

Very impressive army :). What wargame rules you use?

Great to finally see the completed Legion, it looks fantastic. I liked the concept from the beginning and have followed your progress along the way. Look forward to hearing how they go on the battlefield.

Valtheur, I mostly play Command and Colors Ancients, which I love, but am looking at other rule sets at the moments, particularly for one that enables very big battles to be played quickly.

Very impressive work - and you say you have two of these formations. I'd make sure to reinforce your gaming table to make sure it can handle the weight

Thanks! Miles, look out later today, I'll be posting the first legion.

I love the army concept and the visual variety. Kudos again on the terrain. I like the fake fur fields. It looks like flowing wheat, and the figures aren't hovering an inch over the table when they are on the wheat (as with the stiff bristle wheat fields).