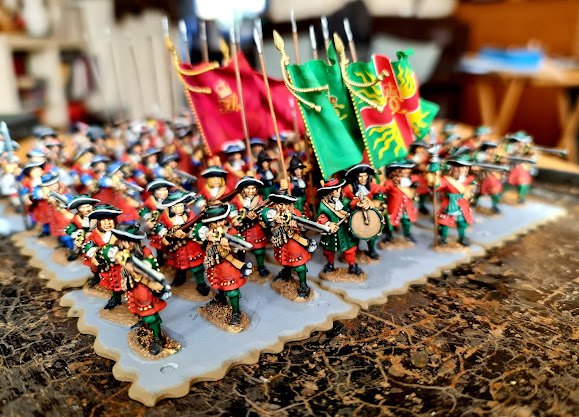 Here's a WIP shot of my third 1672-era battalion, the Tangier Regiment (later known as The Queen Dowager's Regiment or by its nickname as "Kirke's Lambs") in the 1670s. Behind them are the Foot Guards I finished a week or so back.

Interestingly, this is the second time I've modelled this unit. I have a larger version in this older post using Front Rank minis. Golly they look good, I'd forgotten! The later unit is better for Sedgemoor in 1685, having flintlocks instead of matchlocks. At the moment I think I'll have two separate collections- one for the 1670's and the other for the 1680's and 90's, using 1672 and Front Rank minis, respectively. It's a bit mad but the styles of the two ranges are quite different, and there was a fair amount of innovation in uniforms and weapons between 1670 and, say, 1690.

The new unit is (again) based to my intended standard for the period - 28 foot on three stands that will work on a 20cm grid. The minis are all North Star 1672, very graceful. I really like the look of the apostles and the sea-green facings. The drummer has reversed colours, very tasteful! 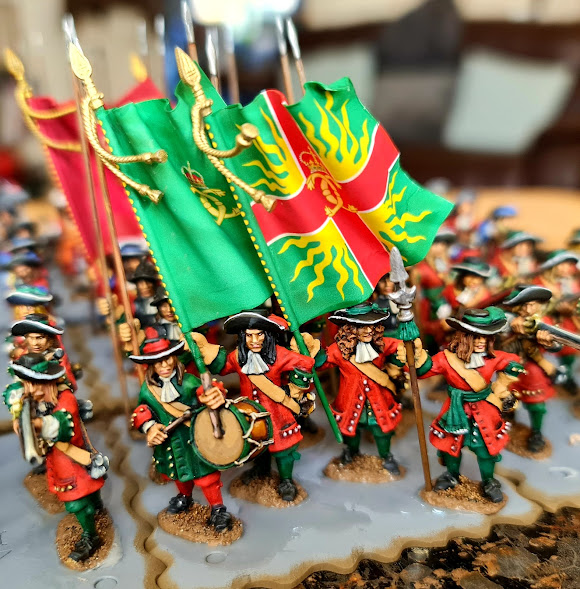 Again, I don't know who the original painter was (he used an interesting non-metallic metallic technique that I can appreciate but can't match) but chum Dave Millett very kindly painted up a few more minis to match and I detailed the minis, and Flags of War flags. I'll get these off to chum Ian later this week, with the Guards, and we'll see how they look, flocked! Proper photos in a few weeks.

In other news I'm very pleased with sales of the new For King and Parliament ECW scenario book "The Siege of Norchester" by Robert Avery that we launched on Friday- if you missed it you can find it here.

A beautifully painted unit Simon. And what a history they have too!

The units are really nice, just a pity they don’t do more than 2 infantry poses

Lovely looking figures...this is an era that has been tempting me for several years...my last "big" project was Great Northern War and I already have WSS, so maybe this period will be next?