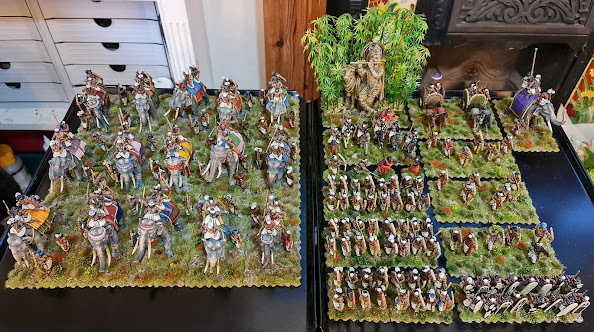 Here's a quick pic of the army I took to the To the Strongest! Worlds at Chalgrove, yesterday. It's an Indian army, with most of the minis painted by Dan Toone, Shaun McTague and myself, with basing help from Ian Notter. It's not quite finished but you get the drift- later I'll take some closeups.

It's a most unusual army which I built to maximise the number of elephants I could put on the table (16), just for the fun of seeing what it looked like and experiencing how it might work. To achieve this I represented eight small units of elephants each with two elephant models. I think I probably had more elephant models in this one army than have been used in all of the previous Chalgrove tournaments, added together. Tim described it was a cheesy army, on account of all the one hit elephants, so I've named the senior general King Mutar Paneer and the various princely subordinates after other spicy cheese and vegetable dishes.

Due to nightmare travel problems I missed the first game but arrived shortly after the start of the second, and Steve Dover very kindly agreed to play me. He had a Spartacus army with masses of mobs and skirmishers- it was huge. At the start I shot his army up but I had trouble breaking the three hit units- my elephants "bounced" and then one rampaged, carrying off a second one and a general. It ended in a draw with Steve slightly ahead on points. Alas I took no photos! 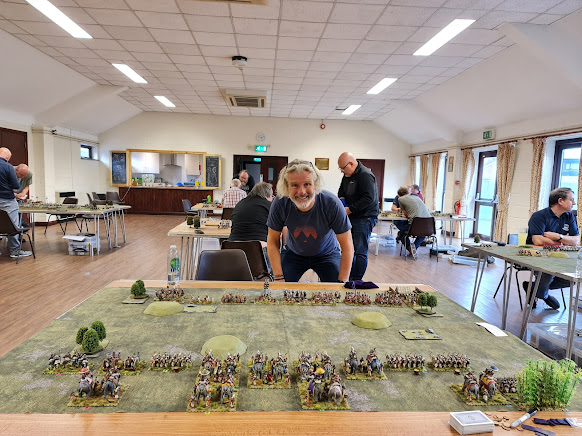 My second game was against Howard Litton with his (formerly my) Polybian Romans, it was super to see both him and them again. We just weren't fast enough to reach a conclusion- I squeaked narrowly ahead on points in the final round. 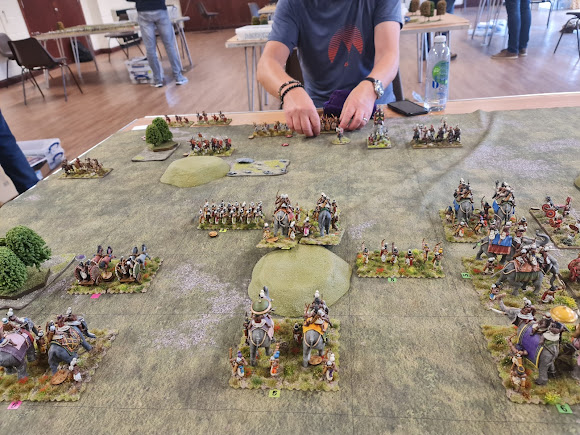 I had a sense that I might have won in another few turns - but with this army there's no degree of certainty, it's almost as dangerous to itself as it is to the enemy. 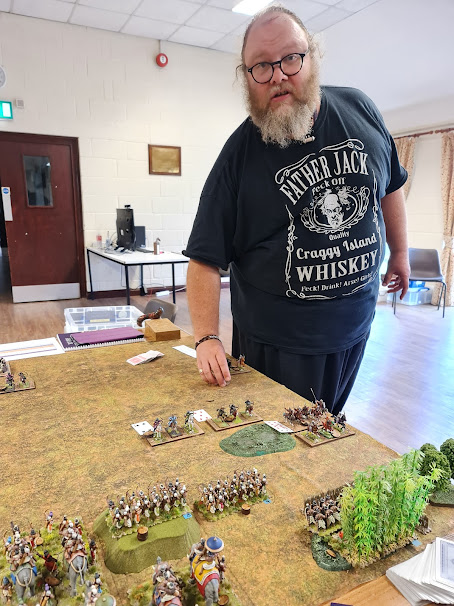 My third and final game was against old chum Tony Horobin. He had Pechenegs- they rode up and shot at me, I shot back at them and before the archers duel was complete we ran out of time. This was an odd game as I kept my elephants in reserve because they were vulnerable to shooting and not fast enough to catch his light horse- they barely moved. Tony almost took my camp, though, attacking uphill, over fortifications, from a wood with cavalry! Again, it was a draw but I was a little ahead on points.

I found the Cheesy Indians to be a really interesting army to use- powerful but extremely fragile- a single failed save can lead to a casade of rampaging nellies. I don't think it's a tournament winner but it stood up well enough, and I'll have another outing at the London GT tournament on September 25th- the tickets have sold out but if you email me I might be able to fit you in, especially if we have a cancellation.

Congratulations to Peter Ryding who won with a Marian Roman army. Huge thanks to Steve Dover and the South Oxfordshire Generals for running the event and keeping the teas coming, it was, as ever, a great deal of fun and so good to catch up with so many friends after such a long Covid-related interval. I know Steve's already looking at ideas for 2022...