Here's the latest progress on the Switzers. Above, the vast majority of miniatures are painted, and most are highlighted and inked. There must be 650-700 of the blighters, the majority painted by Shaun McTague but some by David Imrie and Lionel Bechara. I even painted a few from scratch, and highlighted most of them. Later I'll need to add a unit of cavalry, some halberdiers and, of course, their Burgundian opponents. 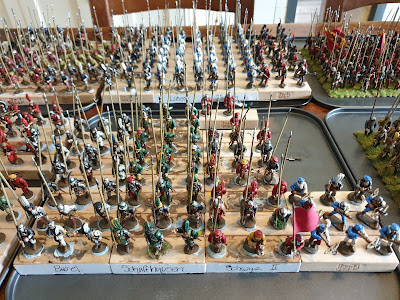 Above and below are the four trays (roughly 500 minis) of mostly-painted minis. These are grouped by canton, but there's also a tray-and-a-bit of minis in non-cantonal colours. 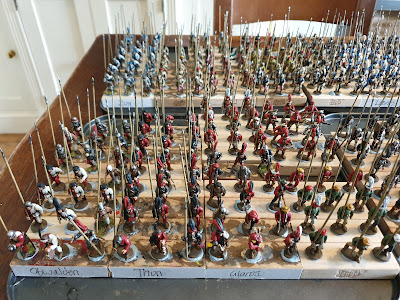 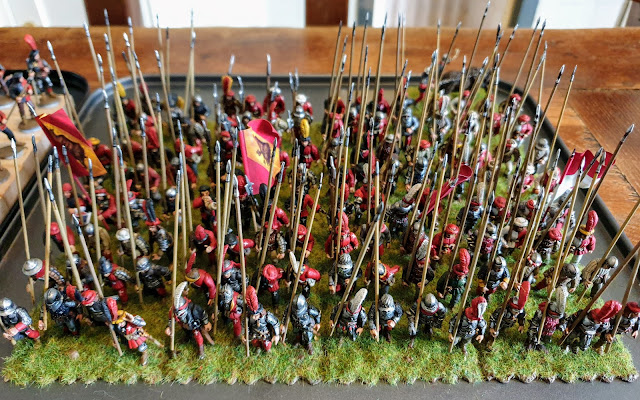 Above and below are the 8 (of a projected 18) mostly-finished units. My chum Ian very kindly flocked them for me, he's a demon with a puffer-bottle!  I've not yet added tufts, that's the final stage. 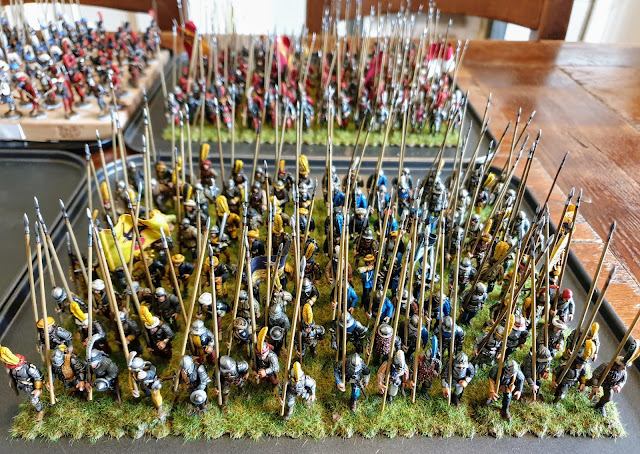 So, I hear you ask "when will they be finished?" I've reluctantly decided to delay that step until the autumn, because I have an even bigger project to finish this spring/summer of which more, anon. So I'll be putting them all in storage boxes, to clear space, and trying to find a place to store them! In the autumn I'll finish them off and make a start on the numerous Burgundian army.

Wherever they're finished its gonna be a stunning army.

Beautiful Simon and you need a bigger project ?

Took me 24 years to complete my 15mm Swiss army. A case of boredom, apathy and the fact that all pike armies are quite one dimensional. Either hunker down in terrain is facing a mounted enemy or just charge and hope you roll them over!

The force will look glorious on the table, once its done.
Looking forward to seeing your summer project as well.

They do look great all massed together. Are they mostly from one manufacturer, or a hodge-podge?

They are 98% Perry, with a few old Grenadiers and one or two Foundry.

While Lockdown has been difficult, and COVID itself a real shock, look at the trivia that obsessives can produce when they can't get out! I do include myself in this, by the way; no criticism of the Big Red Bat.

Thank the stars for hobbies. I don't think any of us are actually really sane for starters, but wargaming has helped us...not to deteriorate.

Splendid looking Swiss! Im intrigued by your other project and obviously hoping it will be your renaissance rules!
Best Iain

My that is a lot of long, sharp, pointed sticks! A fine, fine display.
Regards, James