Here are some Burgundians that were painted form me some time back by Shaun McTague and Lionel Bechara. I highlighted and finished last August. They languished in the basing queue until chum Ian Notter very kindly flocked them last month, after which I tufted. I'm trying to clear the decks of mostly-finished units before a summer basing push.

The unit is a single block of pike, for use on a 20cm frontage. All of the minis are plastic Perrys from the Mercenary set, and I used the flags that come in the box- they are simple, but effective. The six bases are my FK&P6a's, which are roughly 60x40mm. 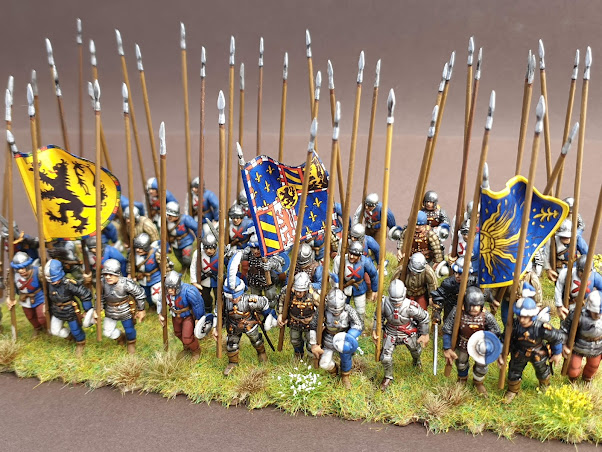 I'm a bit worried for these chaps- they are very heavily outnumbered by the Swiss they will end up facing...
In other news I'm told that the tables for the London GT tournament on Sunday 26th September are starting to run short, so if you want to come along, you'd better get your booking in sharpish! The event  is themed Rome and Rome at War. You can bring any army from the following chapters of the Ancient Army List eBook- we’ll use the edition published at the end of March.
If you don’t have a suitable army, I’m confident that we can lend you one. I could tell you what army I'm bringing, but then I'd have to kill you. ;-)
https://www.lgtpresents.co.uk/product-page/bhgs-to-the-strongest-gaming-ticket
Posted by BigRedBat at 12:03

They look great! Nice work on those lovely Perry figures.

Beautiful as always! What a shambles Charles the Rash will make of them!

Beautiful as always! What a shambles Charles the Rash will make of them!

Splendid looking Burgundians! I couldn't find you on the GT list last I looked, I'd better go back and see if there is any space!
Best Iain