A reminder popped up on Sunday to remind me that I have been blogging for 12 years, since 8th November 2008; how quickly the years have rushed past! Here are twelve links to some of my favourite blog posts from the duodecennial period. Links will take you to each blog post. All images will expand, if clicked.

2008 - The very first post - looks like I failed to add a title! I was also experimenting with formats. A democrat had just won the US election and there was a major economic crisis underway, so no change there. Mind you, there wasn't also a plague back then. :-/

2008 - My first phalanx - I had a modest 60 phalangites back then. To see how it has swelled over the years, see also the Magnesia phalanx, below!

2009 - Zama at Salute - this super Command and Colours game was run at Bletchley and later at Salute- lots of fun with chums including Dug, Ian, Nick Speller and Keith and Adam from Aventine. We even won a prize!

2009 - Glorantha - I'm a big fan of Gloranthan fantasy - the BigRedBat title of the blog comes from the Lunar Empire. Below is one of my favourite models. One day I'll write that fantasy version of TtS!... 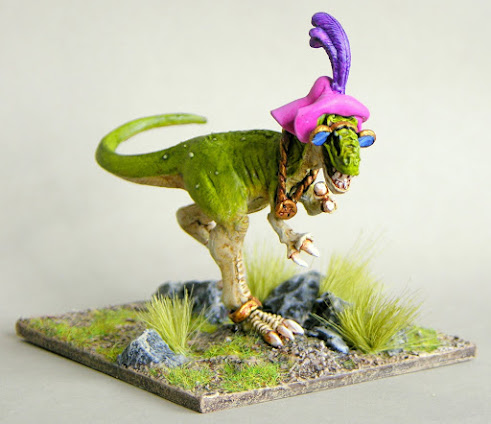 2011 - Hail Caesar - I played this game of Hail Caesar with chum my good chum Ian - had great hopes for the rules- but that night we fell out over measurements and angles. After the game I decided to write a set of grid-based rules, which Ian was a huge help with. If we hadn't scrapped, that night, I'd never have written TtS!

2014 - Cremona at Partizan-in-the-park - possibly my favourite display game at the best-ever Partizan. The best lighting I ever experienced at Kelham Hall, by a factor of ten! ;-)

2015 - To the Strongest! - was released. It had taken me four years to get the rules right - I'm not the world's fastest writer! :-) Happily they have proved popular and enduring- I'm currently working on some army list books and the

2018 - Soggy Bottom - This huge ECW For King and Parliament game visited most of the big shows, I think it looks a million dollars, and we had such fun with it.

2018 - Leviathans There have been many posts with images of elephants, but this is one of my favourites. Heck- just found this post- it's even better! I have been modelling a lot more elephants for a big projected Ipsus game, but that's all been delayed by Covid- hopefully next year, if there are any shows.

2018 - Magnesia Phalanx - at another Partizan, I modelled a 1:1 section through a 32-rank deep Seleucid phalanx. This by no means marks the end of my phalanx ambitions- Shaun McTague is painting a load more for me at the moment.

2019 - Mancetter at Salute - this was the first outing of last year's huge Mancetter game- we had such a lot of fun with it! Won a trophy, too.

So far the blog has had 1,276,284 page views, and, at a time when blogs are in something of a decline, still tracks at 12-14K views per month. A big shout out to everyone who has visited over the years, even to the numerous Russian bots! Thanks to all those who have helped me put on the demo games, helped me with the rules, or bought the rules which fund me to keep on writing the rules! Here's to many more blog posts!

So to sign off, here's a picture of Cremona at Salute at Partizan in the Park back in '15. I just love that pontoon bridge, I really should run that game again...

Congratulations!
Your blog is very interesting, and I am sure it inspires many wargamers around the world (including me) in our common hobby! I have been reading it for many years and admire Your achievements. Keep it up!

Well done mate :-) I remember the early days as I thought I was the only one playing C&C with 28mm, even then you had big units ;-)

Congrats Simon. 12 years is some going!

Happy anniversary, here’s to the next 12!

Congratulations Simon. Certainly one of my favourite blogs to visit on virtually a daily basis. Keep it coming.

Congratulations on ten years happy blogging! Here's to the next ten!

Congratulations....I do hope blogs remain into the future

Bigger and better every year mate! Congrats and thanks for sharing your own particular brand of crazy with the rest of us.

I always wondered how you came by the Bigredbat title, now we all know.
Thankyou for providing 12 years inspiration and eye candy bliss, and no one does it quite to the grand maniac scale as you, another 12 years please!

Happy Birthday to your blog!! My best wishes for many many years to come!
Keep up the Brushes!!

Congratulations on the anniversary, Simon. Wishing you many more.

Congratulations on the Bloggiversary Simon - many happy returns! Always love seeing your armies' progress both on the painting table and on the battlefield!

Congratulations on 12 years. I have visited your blog for many years and have always found inspiration. In fact thinking about starting a couple of Successor armies inspired by your blog, and I am sure I am not the only one.
Glen in NZ

Congratulations on the milestone. As a blogger of nearly 12 years (mine started Jan 2009), I can appreciate what an achievement this is. Happy Blogoversary!

Congratulations from the Shed -