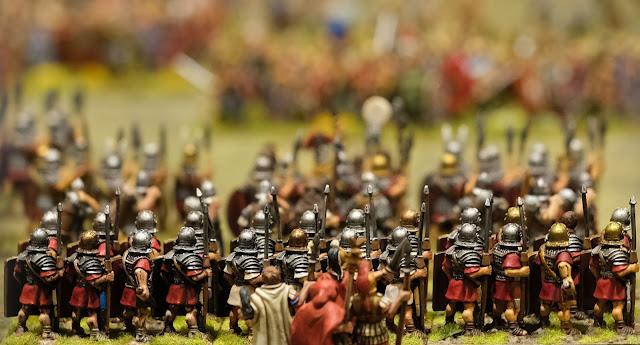 Apologies for the delay in posting the second part of this- I have been frantically busy since Salute! All of these lovely close-ups of our Mancetter 61CE  To the Strongest! game were taken by Alan Daniels. 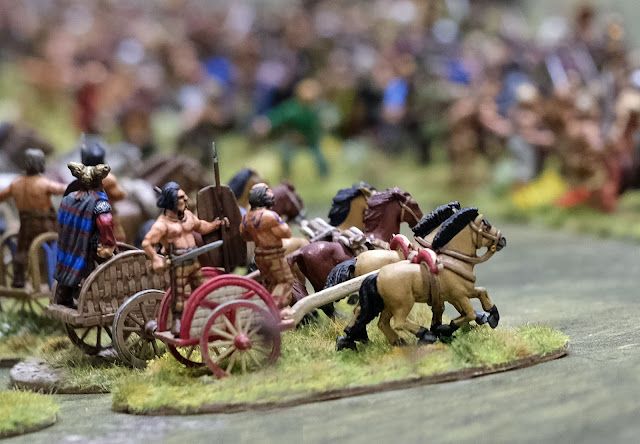 The chariots are mash-ups of the Wargames Factory kits with Newline and other ponies. 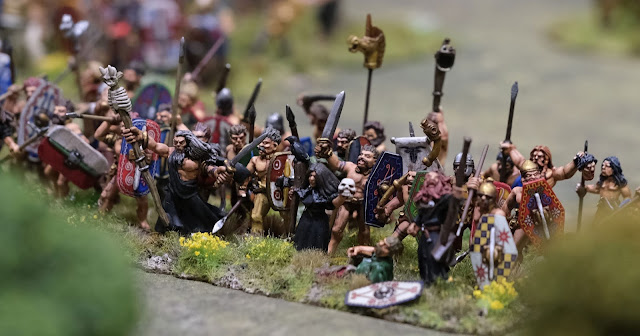 Above is my favourite warband, based on Tacticus' account of the druids at Mona. "On the shore stood the opposing army with its dense array of armed warriors, while between the ranks dashed women, in black attire like the Furies, with hair dishevelled, waving brands. All around, the Druids, lifting up their hands to heaven, and pouring forth dreadful imprecations, scared our soldiers by the unfamiliar sight, so that, as if their limbs were paralysed, they stood motionless, and exposed to wounds. Then urged by their general's appeals and mutual encouragements not to quail before a troop of frenzied women, they bore the standards onwards, smote down all resistance, and wrapped the foe in the flames of his own brands." 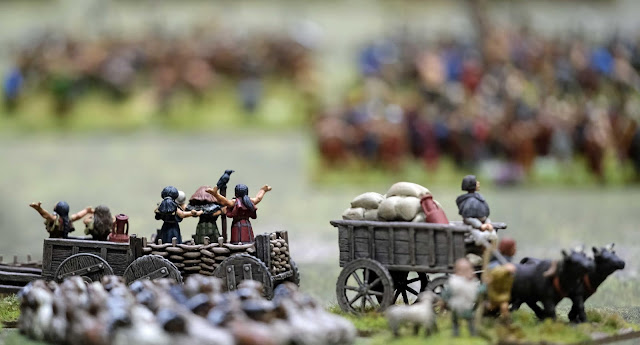 Celtic women cheer on their menfolk. I see that d****d scene-stealing flock of sheep has crept into the foreground! 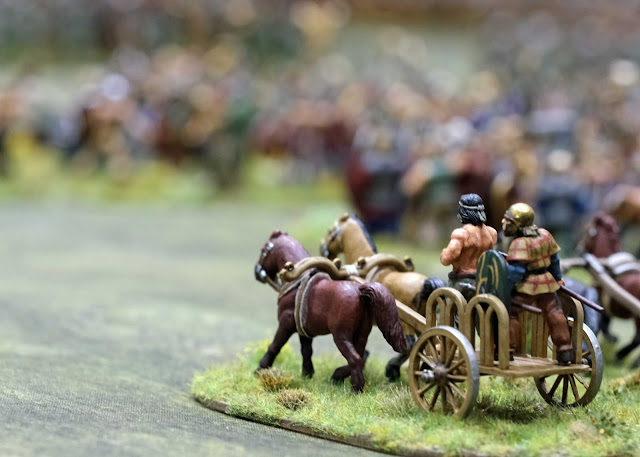 Another chariot. The look of the chariots was much improved by the recent flockathon. 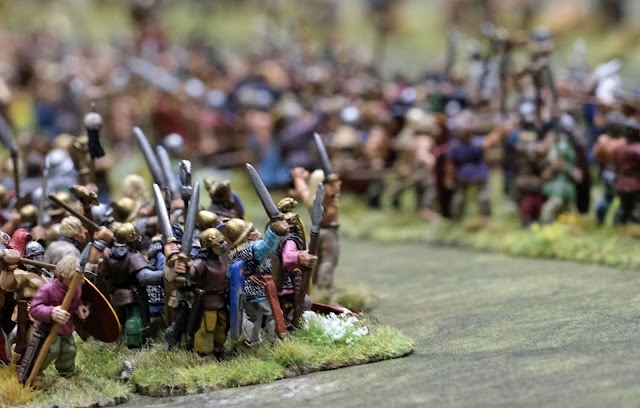 Some of the warbands include armoured warriors, representing dismounted noblemen and chariot warriors.

Above is a downhill shot. The legions in the reserve line were not much engaged; the fight falling to the the auxiliaries, further down the slope. 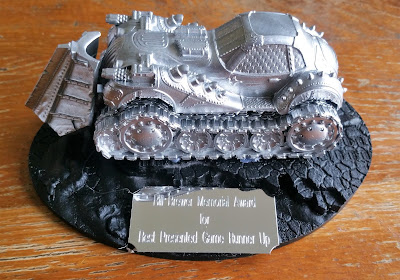 Finally I was really chuffed to receive the Bill Brewer Memorial Award for best presented game: runner up; a super seal on the event. I'd like to thank everyone who helped with the project, especially Shaun McTague and Ian Notter, and, on the day- Ian, again, Mike Brian, Tim Thompson, Andrew Brentnall and Neil Graber. Also, of course, everyone who played or stopped by for a chat! And lastly the Warlords (especially Philip Andrews) who run the event with great (and often unappreciated) efficiency.

Simon, thanks again for putting the game on, really enjoyed my afternoon game. Very inspirational all round.

Clearly a stand-out on the day. Won't be forgetting this any time soon.

Thanks all! I was so pleased with how it came out.

Great photos from Alan again. Also a very well deserved award for a stunning game. Your games continue to inspire. I don’t subscribe to the “people don’t want to see games they can’t emulate” view. I think it is games like this that moves the hobby , with all of us in it, forward. Can’t wait to see what you do for 2020.

Congrats on the prize. Runner up though? What could have possibly have been first?

Stunning work Simon. Only runner up, I'm sure the judges were mistaken ;)

I was just pleased to have a sniff of a trophy, Paul, it's been almost a decade. :-)

But what came first? I can´t imagine what would have taken first place over yours.

Don't know, Paul. It must be hard to judge a skirmish game with a sci-fi game or with a big historical game. Beauty is very much in the eye of the beholder. :-)

Ok, I suppose "in the eye of the beholder" does Count. Maybe next year eh? :-)