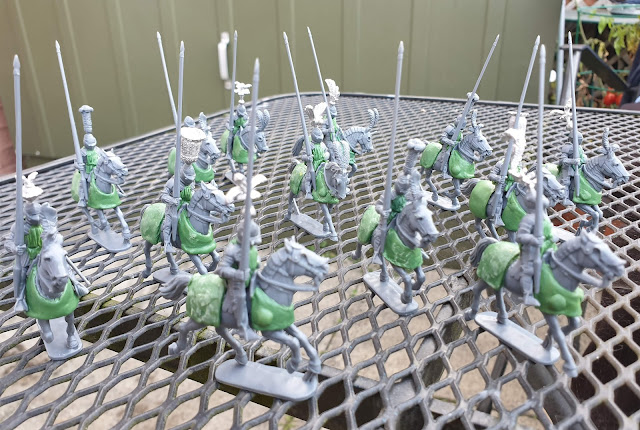 I've discovered (courtesy of some research, confirmed by asking Simon Chick) that all my Italian knights are on the wrong hosses, at least the wrong hosses for the late c. 15th. Apparently the pesky Italians almost invariably rode leather-armoured hosses, not at all like the metal ones that my current Italians ride. Also the pesky riders wore a distinctive sort of tabard called a giornea; who knew?

Essentially, I find that I need to convert 80 or so knights to form an entirely new army, and convert the existing 50 or so knights to become a different army of an early c. 16th nature. Such is the hard life of a mildly OCD gamer. 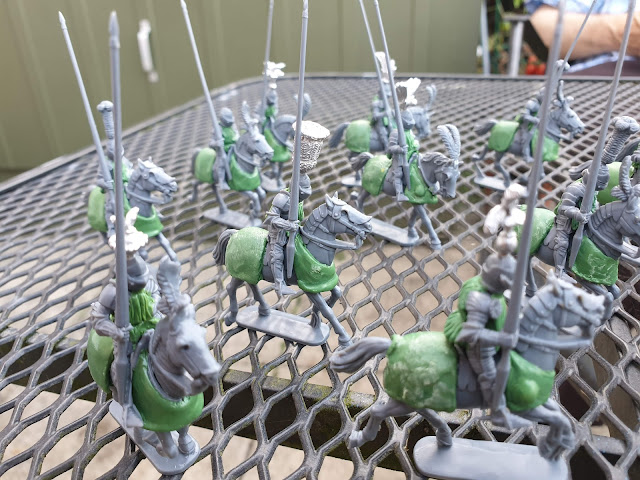 The upside is that the leather horse armour was richly decorated with heraldry and I can give them great big plumes. Simply ginormous plumes, in fact, from Mirliton in Italy. Onwards and upwards!

Looking forward to seeing these roll out. If you need to find a home for the unwanted knights....

Life to short to agonise about trivia like that!

Ginormous plumes are always to be appreciated. And the conversions look sharp!

To add to your suffering, I believe that those tabards were held by a belt only on the front, and left loose on the back. See metal Italian figures from the Perry range, I can also throw you some reference links to Italian reenactors pics on facebook ;)

Hi Matheo, I think the garments either could be belted front and back, or just at the front. I've done most unbelted at the back, they look better and are easier that way. I'd love to see some pics!

Hi Iain, I'd love to see some pics. I was looking at a 1520's painting and they all had gorgeous white plumes.

Based on your other work I am sure these will be amazing! I’m looking forward to seeing the end result!

Mildly OCD? My friend, you have it bad,and I mean that in nice sort of way.

Hello, great to see you are improving the look of the army!
If you want an image of a giornea here it is:
https://www.google.com/imgres?imgurl=https%3A%2F%2Favalonsibyl.com%2Fimage%2Fcache%2Fdata%2Fgiornea-del-xiv-sec-1986-600x840.jpg&imgrefurl=https%3A%2F%2Favalonsibyl.com%2Findex.php%3Froute%3Dproduct%2Fproduct%26product_id%3D1986&docid=GHuqKrT1Lj8pmM&tbnid=nOmJjvDwaGOM9M&vet=1&w=600&h=840&itg=1&hl=it&bih=653&biw=1024&ved=2ahUKEwiv9t_q5aXsAhWB_KQKHfeOBIkQxiAoBHoECAEQLw&iact=c&ictx=1

Version belted to the front and left loose as a mantle on the back :)

About the plumes, apparently in the XV century Italy they were used like sashimonos in Japan. Being quite expensive they were used mainly by the captains as a focal point, they could be in any combination of number and color: be creative! ;)

Thanks for the link. Funnily enough, I'm painting plumes tonight; I'm going black and white like in the Rout of San Romano, I fancy a semi-uniform look like in that painting, where I think they were used to differentiate the two sides.

Not to throw a spanner in the works, but Italian knights of the late 15th century had a mixture of barding. A lot of hardened leather, some steel often covered in cloth and sometime steel simply painted. Your "hosses" look great and I may "steal" pictures of your work when I recommence working on my lads. Here's a link to military modeler's site in Florence Italy, who has many examples of knights from the period: http://www.parvimilites.it/rinascimento-italiano/

Yes- I've also done a few horses with cloth covering over metal, for the leaders, and I'll mix in a few unarmoured horses for variety. I should probably paint some armoured ones, too, as you suggest.

That's an excellent modelling site- thanks very much! I was admiring Sigismundo Malatesta's knights only yesterday.