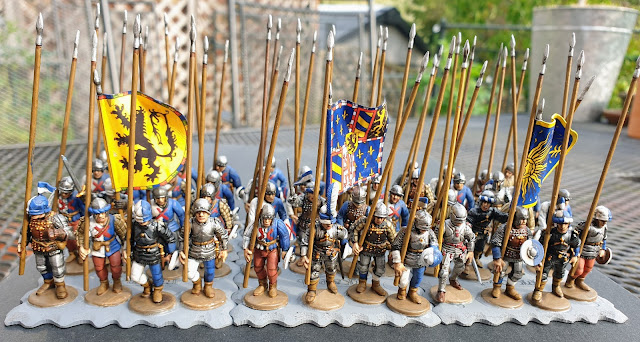 I've recently entered into a golden period of finishing minis, but haven't taken many pics, which I'll try to remedy over the next few days. Here is a unit of 48 Burgundian pike that has been on the back burner for 3 years or so. The first minis were painted by Lionel Bechara, but most were painted more recently by Shaun McTague. I finished them (highlights, shade washes) and added flags from the Perry box, which didn't look much on the page but which look great on the pole. The bases are FK&P6a's. Later, I'd love to add another 48 minis not in the Burgundian livery, but rather in various coloured uniforms with guild flags.

At the moment I seem to be working on Swiss, Burgundian, Milanese, Venetian and Florentine armies, in parallel. :-/ I'm loving the Perry plastics.

Thanks- they will look twice as good when the bases are done, hopefully in a few weeks time.

Splendid, look forwards to seeing them based and battling.

I'm also loving these. I did tell you years ago "plastics would get you" and I recall something about your dead body,however let's not go there.
Now that you've discovered plastics can I have those rubbish metal Romans you appear to have no need for anymore...I can collect.

Yes, who'd have thought it. I love the ease of conversion of the plastics, and the way you can throw them across the room without any damage.

I am continually amazed by your ability to produce both quality and quantity.

A most handsome unit!

Excellent work on those, the perry mercenary set is so flexible.