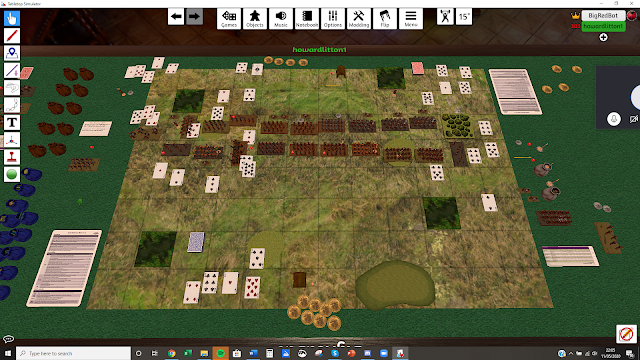 Last night I played the first game of the To the Strongest! 1066 online tournament against Howard Litton (Limejelly3). I drew Harald Hardrada's Norwegians (ie Vikings), and Howard drew King Malcolm's Scots. The terrain was one of the more open versions.

I won't go through the game in too much details but I planned to charge and chop my way through his line with my Huscarls, and he to outflank me. We both achieved our objectives, more or less, as you can see above. King Malcolm was seriously wounded and carried from the field, and I was lucky enough to win the game by a slender one victory medal margin.

A huge hats-off to Antony, who set the online version up, and to Paul Thompson who showed us how to play online.

The tournament will run until Mid-Summer Day (24th June) and it's not too late to join in- if you'd like to turn a few virtual cards, drop me an email at simonmiller60 at gmail dot com!
Posted by BigRedBat at 10:37

I like the look of this. I've been hearing good things about TableTop Simulator and this looks excellent.

That looks a stroke of genius! What a brilliant way to play TTS, especially with the lack of face to face gaming.

Jolly good stuff! Looking forward to updates on the progress of this online tournament.

I am tempted, but fear that my MacBook qualifies as a dinosaur (they laugh at me/it when I take it in to the Apple Store . . . sigh).

Wondering if there might be a time when ancient armies are offered/included?

Alas we only have "miniatures" for a few Dark Age armies. It would be very nice to be able to do ancients...