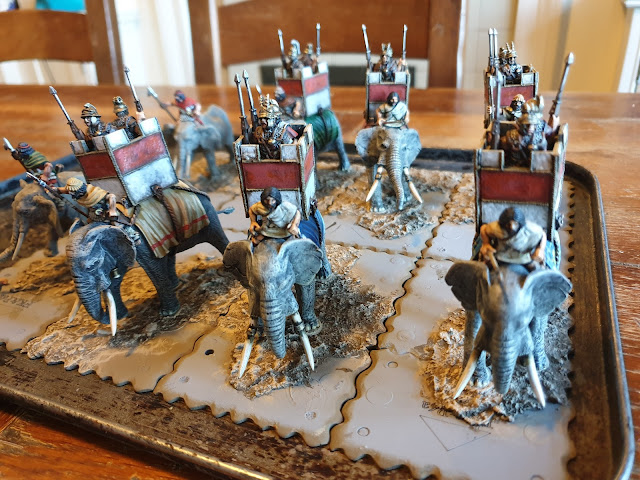 It's been the longest time since I posted images on minis- real life stuff has kept me too busy. But normal service will henceforth, hopefully, be resumed. Here are some WIP images of one of the projects I've been busy on. Six of these beautiful Aventine elephants (along with two other beauties for another project, not shown) were painted for me by chum Kevin Lucas- I just added some highlights on the howdahs and crew. The Aventine elephants are resin with metal detail and are beautifully light. I have rebased two very nice Agema elephants from my Numidian army, to join them. 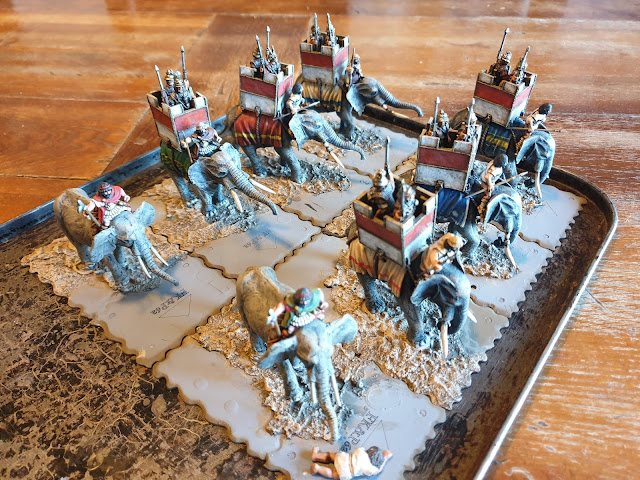 The un-textured areas of base will take the screening light infantry, which aren't yet painted. These eight will form the screen for my Pompeian army for the Salute Thapsus game. I'll take proper pictures, when they are finished in January. I think I now have 31 elephants on bases, altogether, with another 15-20 painted but not yet based, mostly intended for a projected Classical Indian army.
Posted by BigRedBat at 10:37

A gorgeous and impressive collection of elephants!

I second that. Indeed, it will be hard to forget seeing this tray of tuskers.

Tempted, but only tempted, to pack my trunk and make my way to Salute for the proposed Thapsus scenario.

Cheers and Happy Christmas to you and yours!

Lovely work Simon. As always, nothing on the small scale for you. Very inspiring results.
Cheers and Merry Christmas.

What an awesome assemblage of pachyderms!