I took a posse of North London gamers up to Bletchley today, for the Society of Ancients Chalons Battleday.  The Battelday is about using as many different ancient rules as possible.  We played with Simon MacDowall's attractive miniatures, and his Comitatus rules.  Here are some shots, first my "Romans" and their allied Germans (foreground):- 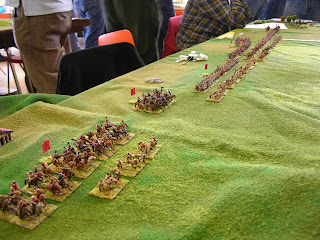 And opposite, the dastardly Hun and their own German allies:- 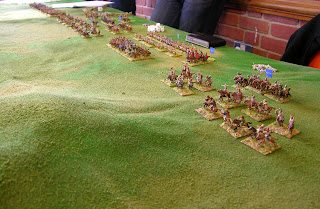 I led the Roman side, as Aetius.  After a lengthy scrap, the battle resolved into 3 combats; on our left, under my son Harry, the Romans were ascendant and the foe on the back foot:- 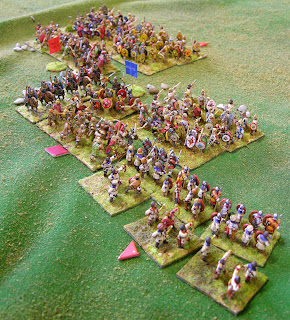 On the right, though, "our" Goths were badly bruised and either running for home, or thinking about getting off, soonish:-

In the centre, where I was (as Aetius), with our reluctant Alans, there was a terribly confusing kettle melee, which swung first one way, and then the other.  Eventually, after killing one of Attila's sons in melee, I charged the man himself, in an attempt to win the battle before dusk fell:- 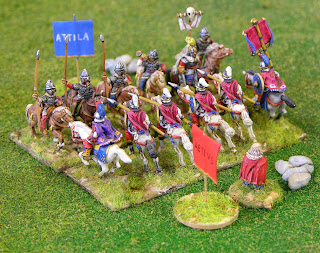 ... and challenged him to single combat.  Unfortunately... 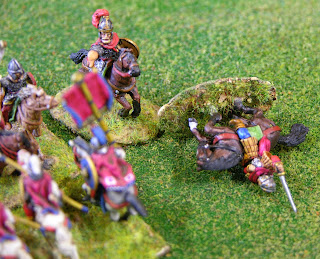 
It was a very enjoyable day.  Simon MacDowall gave a very informative presentation about the battle, Richard Lockwood had everything nicely organised, and I got to chat to a couple of other gamers including Rob Broom and Phil Steele.  Rob Broom's War and Conquest game is below, and looked rahter fine:- 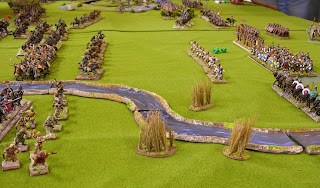 There was also a very impressive Armati game, with a hi-tech table including magnetic hills and edges, which I intend to copy at some stage... 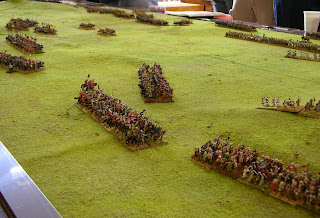 I'm afraid I didn't have time to photograph any other games, but it was a great day.  I'm knacked!

If you aren't a member of the Society of Ancients, it's an excellent idea to join for the magazine, Slingshot, and to support excellent wargaming events, such as this one.
Posted by BigRedBat at 20:32

Email ThisBlogThis!Share to TwitterShare to FacebookShare to Pinterest
Labels: Comitatus, Society of Ancients

Nice games - and what a variety of Ancients rules being played. Great to see everyone having great games going on at the same time. I have a soft spot for Attila after watching that old German flick Die Nibelungen :) Dean

Thanks for joining in Simon - a great day!

Thanks for your patience with running us through the rules, Simon!

Simon and Simon - it was nice to meet you both at Bletchley today.

Oh, and your game looked great :)

Hi Tamsin, was great to meet you, too! Cheers, Simon

Brilliant! Where did that battle mat come from? It looks excellent.

The 5th Century AD is such a great period to game!! If I hadn't been off to Salute next weekend, I'd have popped over. It sounds like a great day. Nice pics too... And it's always refreshing to see that it isn't just me who always gets his general killed in challenges with enemy warlords!!! :-)

Legatus hedlius: The battle mat is the baize from a snooker table spray painted with various earth tones and then flocked. I have done similar with felt and show how it was done at http://legio-wargames.com/#/the-legio-blog/4553964887/Terrain-matters/2324007
Other Simon