Here rides Marcus Clodius Balista, Dux Ripae and later Praefectus Praetorio.  He is a noble Angle by birth, hence the blond hair, unusual on a Roman.  Although a barbarian, he rises high in the ranks of the Roman army at the time of Valerian and Gordianus, in the excellent Harry Sidebottom books.  If you've not ready these, do buy them as soon as you possibly can... the first, essentially about the siege of Dura Europos, is the very best, but all are good.  Harry Sidebottom has written the series of Roman novels that I would have written if a) I could write worth a damn, and b) I was an Oxford Lecturer in Ancient History! 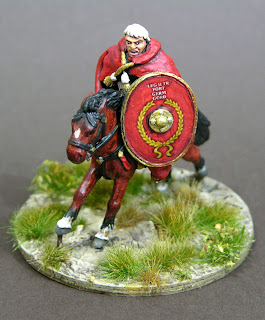 This is another, slightly retouched mini from my fortunate US eBay purchase; a heavily converted Black Tree Miniatures Roman general, I believe.  Curses; it has just occurred to me that he should be riding Balista's Pale Horse...  the mount he is riding must be a "loner".  I might even tackle him, again, later (see comments). 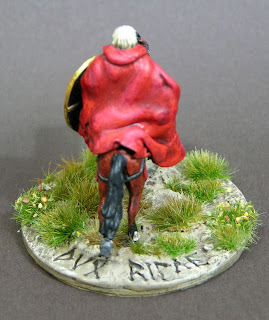 Looks great, Simon. I think I can where you're going with this and the woman on horseback thing. I like those books too...

Not how I pictured Balista, but still impressive.

Thanks. I'm tempted to tackle again myself, with Pale Horse, and a more armoured mini; but I do like the way that this mini is bareheaded. Might also try a version on foot, with Maximus and Calgacus.

Looks impressive enough for a dux ripae. :)
However, tried the first book and couldn't stand it. Too much of this 'in the face' historical hints for my taste. That said, I enjoyed Sidebottom's academic piece on the "Ancient warfare" reflecting on the so-called "Western way of war", and I highly recommend it.

Lovely fig and horse. He bears a resemblence to a Derek Jacobi (c....c...c..Claudius) with a severe look on his face...
Cheers
paul

I liked the books (and I don't like a whole lot of Histrorical fiction). I thought he siege of Dura Europos, in the first one, was brilliant. I didn't know he'd published a history book; will have to have that! His novels have got me interested in the period, which means I've a reason to paint the army...

Nice work; love the engraved name on the base. Best, Dean

Hi Ray, with this one, the only painting I did on the figure was his lower lip! And a little retouching on the shield. The original painter is rather talented, I striggled to match his infantry.