I’ve been planning what to do in the first quarter of the year, up to Salute.   After Salute, I hope to collaborate on a very big project for Salute 2012, which will take up much of my time. 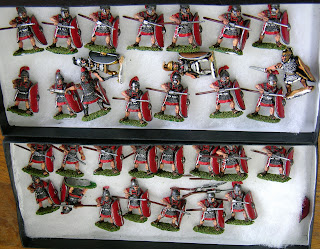 Mini Marian Legion: I bought 30-odd painted minis on eBay, and Nick is going to paint up another 40-50, which will give me the 80 minis I need for another 80-man mini legion of 10 x 8 man cohorts.  This is the representative scale we used for the game with Simon MacDowell, and if I can get 7 or 8 such legions finished (and hopefully get friends like Nick and Dr Simon to muster  a couple more), then I could run a tidy little campaign using Simon’s rules to fight the battles. 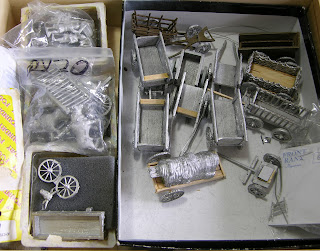 Wagon Laager: This was a project that I started in January 2009, and which has been “resting” since then.  I need to finish prepping the 50-odd figures that will “man” the laager and send them off to Nick, who is superb at painting Celts and Germans.   I’ll then paint the wagons and base the minis into them.  I’ve not seen a big wagon laager in 28mm so this will hopefully be fairly unique. 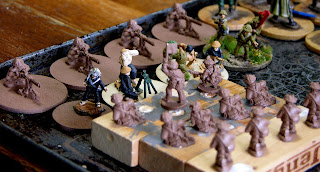 Indo China: I’m very keen to finish the above weapons company, which will give me a complete Viet Minh battalion, together with another company or two of French, and the rules I’m trying to write.  After this I’ve loads of tanks, trucks, guns and half tracks to do...  I like the 20mm stuff as one can fit a little bit of modelling into the odd spare half-hour. 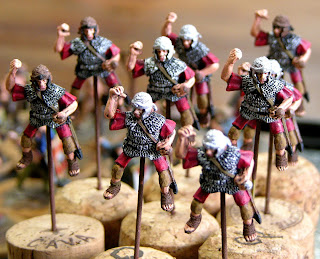 Odds and Ends: I need to varnish and base the Germans on my painting table, and the EIR cavalry. Frustratingly, I realised last night that I’ve only painted 9 EIR cavalry, and need to paint 3 more command figures.  Still the 9 are coming on nicely.  They are actually really nice minis... some of the BTD stuff is really OK.
So that's me sorted for Q1 2011!  Plenty to do... I wonder whether I’ll be able to stick with my plan?
Posted by BigRedBat at 13:08

Lots of nice work going on there. I like the variety of your wagons - as well as the customizing. Regards, Dean

Looks like you have a lot to get painting on! Great stuff!

Looks like your off and running into 2011 Simon, although I'm not sure the Roman empire would have been all that big with 8 man Legions?

Eager to see the cart laager with which minatures will they be defended? Celts and germans but from which manufacturer?

Idem for the carts!

Sorry for all the questions.

Hi Paul, 8 man cohorts; so the unit (legion) has 80 men. Its small, about the smallest I can think of as a legion, but does the job.

The wagons are a real mix. Front rank ones are nice, but I really like the ones I've scratch built from Irregular Miniatures components. The figures for the laager will be mostly Foundry Germans, Black Tree and Crusader.