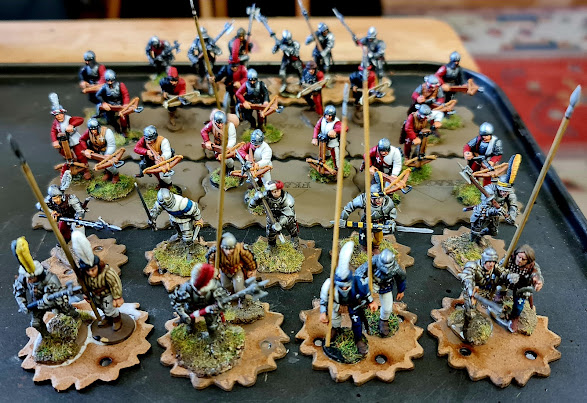 Next weekend I'll be at the Britcon tournament. I'll be taking a Swiss army along; my earlier Condottieri plan was cancelled for fear of an excess of enemy elephants, which they lack an answer to, other than dismounting on which point the rules were a little... opaque. The Swiss, on the other hand, don't care about elephants- in fact, they don't care much about anything very much at all! You plonk them on the table, facing straight ahead and they do, or die. A perfect army for a morning's gaming with a hangover.
A second feature of my Swiss is that they are mostly plastic and so sufficiently portable for a train journey. Although I luckily had just enough pikes and halberdiers, I still need generals, heroes and crossbowmen, so I'm busily basing up some minis from "the reserves". Most of these came from David Imrie's collection- I swapped him for them- they are lovely minis and should look brilliant when based. With any luck it'll give me the push I need to finish the rest of the Swiss army, which has been languishing in storage for far too long.
Posted by BigRedBat at 11:44

Surely you need a Cardinal Matthäus Schiner mounted on a mule to ensure divine favour?
Neil

Golly I do! I have this chap, but I will need to model Schiner. He looks a bit less well fed than my existing cardinal.

But who would know the difference? Existing figure looks fine to me!
Neil

This also reminds me that I need to finish off my WotR army with some mercenary pike, crossbow and handgun bases.