I've not been painting much, recently, but am just getting back in the saddle. Here are some minis painted my chum Shaun McTague for me, that I've just done a wee bit of additional highlighting, and inked. Most will serve as the coustilliers (rear ranks) of my Venetian knights, and the rump will be join my projected Florentine army. They are mostly Perry WOTR light cavalry; superb little models. The mounted crossbows are Perry metals on plastic horses; they work better than the plastic crossbowmen, I think, because the plastic crossbows look too large for mounted use.

In other news.... the Midsummer Madness online tournament is going from strength to strength! So far we've played over 40 games, and will likely have played over 60 by the 24th, when it ends with a Grand Final. It's probably the only big battle tournament running in the World, just now. 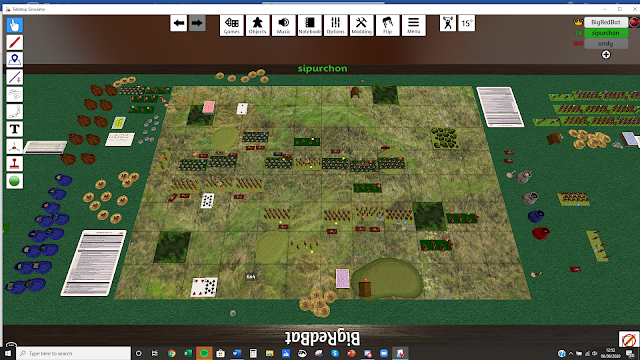 Here's a shot from the end of my last battle with Simon Purchon, which I narrowly won when my brave Anglo-Saxons braved the Welsh arrow-storm to chop up his Combrogi with their Dane-axes. It's been a lot of fun, and a great success- so I very much hope we'll run another tournament, later in the summer.
Posted by BigRedBat at 11:25

very nice indeed, that light cavalry set is a work of genius on the part of the twins, there are so many variations and they always look fantastic. I never get tired of painting them

Yes Chris- lots of lovely heads in that pack, too.

What a fabulous sight!

Hi Simon, what about rules for Tts in the Renaissance? Any news?

Well I'm Plugging away at them- very slowly I'm afraid! Have been doing lots of research though, and collecting the armies to go with it.

Nice to see some lovely Perry light cavalry and good news that your working on your renaissance rules as I'm still painting landsknechts and gendarmes!
Best Iain