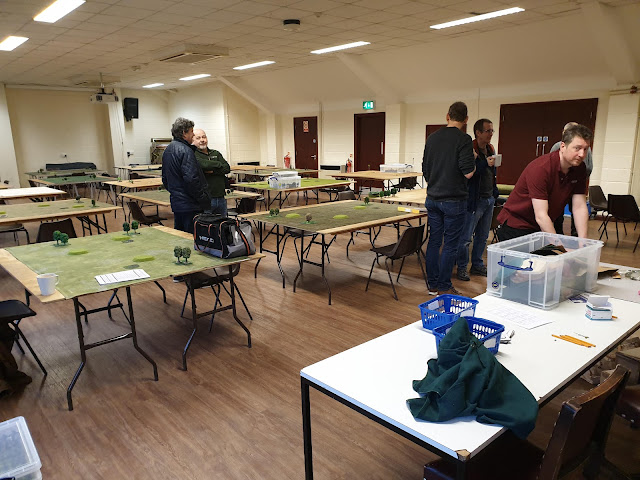 Here's a shot of Chalgrove- setting up for the 2020 World Championships! The players are staggering in from their dawn vigil in the car park. Apologies in advance- I was very distracted and took painfully few photos. 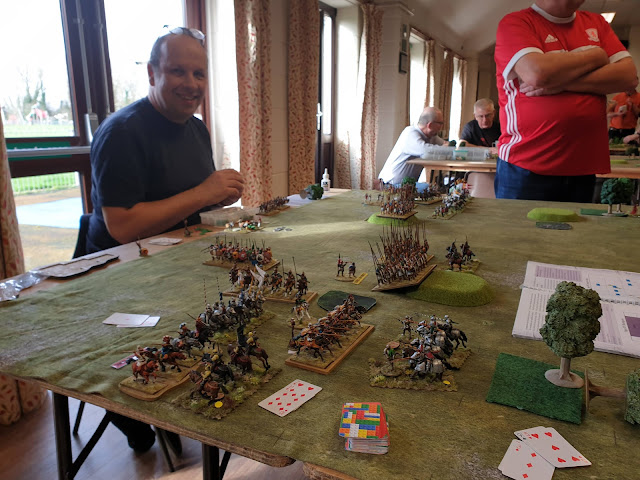 My game one- versus Sid Bennett. I groaned as I realised Sid had a pike army; one of four in the tournament, deadly opponents for my knights. And he had elephants, too. 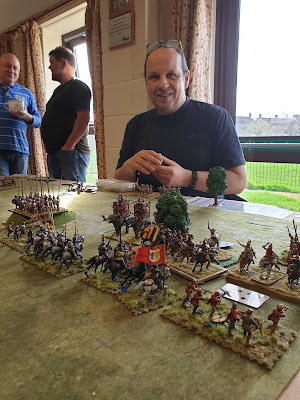 My knights successfully avoided Sid's pikes but had a lot of difficulty with his elephants. He beat me, but only by a few medals.

Game two- alas no photos! I get terribly focussed on the game and forgot. I played Gary Stark with his Imperial Seleucids. Again, pikes and elephants. This time it went a lot better. From memory, I clobbered both wings whilst largely avoiding the pikes in the centre. 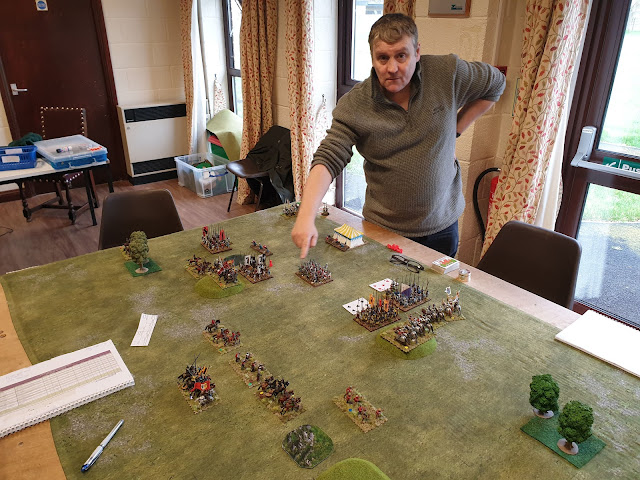 Game three- Garry Chapman and his Swiss. In three games, I'd met 75% of the pike armies in the competition. This was a really interesting one, as it was the first time I'd encountered the Swiss since writing the  Swiss Keil rules in the last "Even Stronger", which enables Swiss to fight to the flank. I was able to pick off most of the Swiss light troops and capture the camp with a flank march. This left me short of four victory medals, so I needed to kill a pike block. In the end I managed it, by dint of attacking a Keil from three sides with almost my entire army and playing a lot of lucky cards! Garry struggled to pin my manoeuvrable knights down.

I found the current Keil rule to be poorly worded and possibly a little overpowered- I'll revise it in the next Even Stronger. It was a very good-natured and enjoyable game though; a bit like the battle of Grandison, without the Swiss reinforcements arriving. 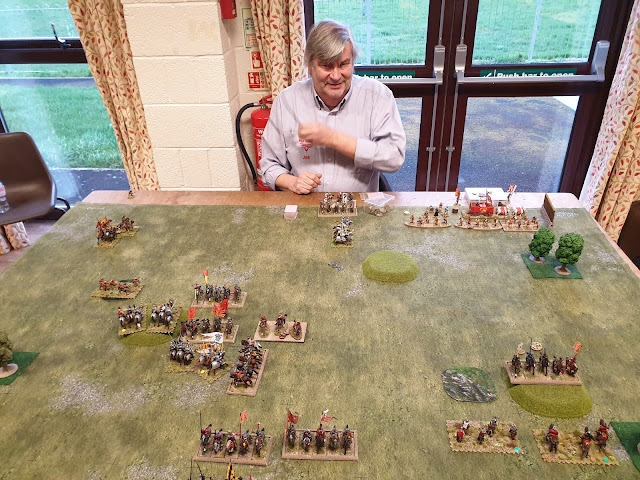 Two decisive victories threw me into the path of Jan de Neve, near the top of the leader table. By this point, I was fully expecting to meet the final pike army in the event (another Swiss), but instead Jan had the doppleganger of my own army- Later Italian Condottieri (Venetian). He had more knights, whereas I had heavier knights and more heroes.

This was a cracking game. It started with me losing three or four units in the first two turns, and I was, indeed, on the back foot throughout the game, but somehow managed to end up slightly ahead at the end. I think Jan and I are very evenly-matched players.

Alas I don't have any photos of the presentations and can't even remember who won what, except that Peter Ryding won first place with his Komnenon Byzantines (which had outmanoeuvred me in Cardiff). He's a cracking player! I believe Simon Purchon came second with his dreadful Sassanids and Tim Thompson came third with his Normans. Tony Horobin took the Dead Elephant award, with his Marian Romans

I'll see whether I can get some more photos and the names of those who won the other prices. It was a splendid day, many thanks to Steve Dover and the South Oxfordshire Generals for hosting, and to Tim Thompson for checking all of the army lists. 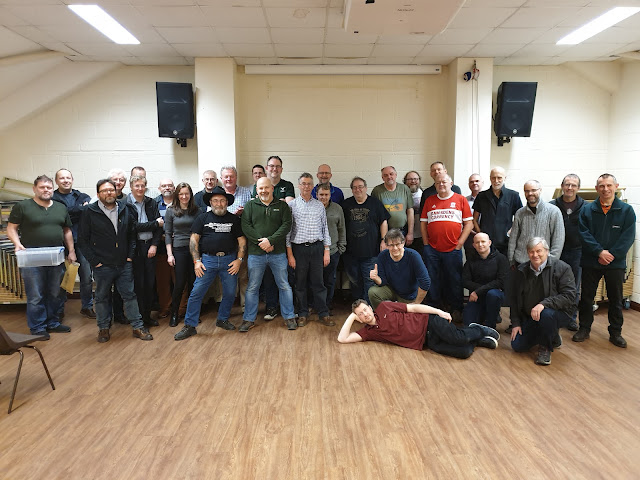 Stig of the Dump said...

A brilliant days gaming, i hope to be back next year with a new army!

Sounds like you had a good time, though I do admit I've never had any time for wargame competitions myself.

Thanks chaps! Steve Dover and the South Oxfordshire Generals did most of the heavy lifting. It was a super day's gaming. :-)