To the Strongest! in Glasgow

This weekend I'm in Glasgow, where Dave Soutar of Glasgow and District Wargaming Society has organised a two day TtS! event. Dave very kindly picked me up from the station and we played the first two games, yesterday. 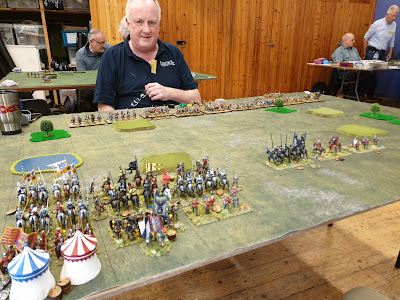 Above is game one vs. Balkan Dave, who I already knew of of from his excellent blog.  Predictably Dave had brought (Balkan) Dacians. I only got this one photo- You can see I've out scouted him, and am preparing to smite his right wing with the full might of Milanese chivalry. It went well for Milan, although the Sarmatians put up a tough fight. I spent the post game period trying to persuade Dave to write all the Medieval Balkan army lists that I'm lacking- Serbs, Albanians, Transylvanians.  :-) 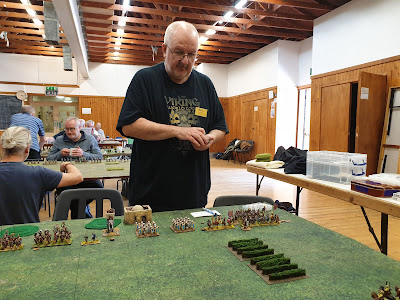 Here's game two vs Bill. Bill had a beautifully painted Aventine Sassanid army. He outscouted me (the horror!) and started pushing his troops forward (below). I quickly found myself pinned on my side of the table, and out flanked on my left. I didn't have an answer for the Sassanid elephant, either! 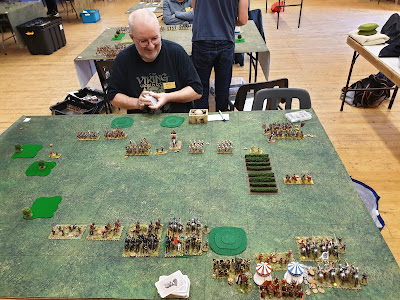 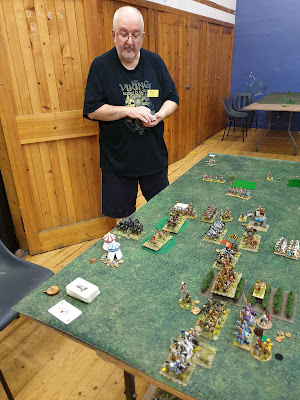 It all went downhill fast and I had no time to take photos, until this shot taken about 15 minutes before the end of the game.  I am five medals to three down, and pinned like a caged beast into 1/4 of the table with my left flank totally in the air. It's never a good sign when the other player has to come round your side of the table to play his activation cards!

Luckily, shortly after this (below), I finally got my act together and launched a desperate counter-attack. Here are the last cards of the game- I managed to polish off some levy spearmen and a disordered cavalry unit and general to and snatch an 11th-hour ten-five victory from the jaws of defeat. It was one of the closest and most enjoyable games I've played. 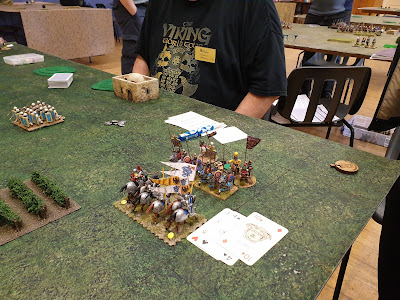 So with two wins in my pocket; the omens are good for today!  Tomorrow, I'll post part two.

GDWS is a great club- 50 years of wargaming history. I wish I was a bit more local! They are a super bunch of guys, very welcoming, indeed.  If you want to look them up, or better still, join,  you can find them here.
Posted by BigRedBat at 07:12

A couple of lovely looking games and a right to the wire win in your second game! Looking forward to picks from today's games.

Best of luck today, it looks like you are have a blast.

Some gorgeous games there, nice work!

Thanks chaps! Part 2, and results, tomorrow.

Simon, I was briefly a member of this club in the '70s - a great bunch of people then, so glad to hear they are still on the go! Sadly, a bit too far from Gloucestershire these days...

Yes a crackling bunch of chaps! Very welcoming and good-natured.

Brilliant looking tournament Simon and once again, tremendous looking armies. The great thing about TtS is the rule system, gridded table etc. doesn't allow to much friction and angst as the outcomes are plain to see re movement etc. Everyone just seems to enjoy the games a heck of a lot more in my opinion.

Yes it was all very easy; I think at least 55 of the 64 games must have been decisive. Such a lot of fun! I'm just going to write up part II.