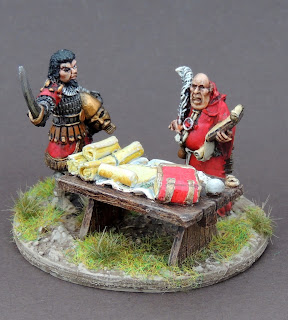 This is a recently refurbished command stand for my fantasy gaming using "To the Strongest!" set in the world of Glorantha. It depicts the Lunar general Fazzur Wideread remonstrating with his commanding officer, Euglyptus the Fat, at the battle of Building Wall. The battle was a disaster for the Lunars and Euglyptus was either poisoned or drowned in a barrel of lampreys (depending on who you read) shortly thereafter.
Posted by BigRedBat at 12:49