Yesterday we fought the first ever "To the Strongest!" Tournament at Benson in Oxfordshire. I was delighted to be able to play, myself, to roundup an odd number of players. Ten players fought a total of 15 games, each lasting 2 hours. 10 games were decisive and 5 draws, with most of the draws occurring in the first round, before the players had "warmed up".

Unfortunately in the rush I failed to take many photos of the players, but I did get shots of some of the armies and games.  Below, my "Decline" Romans in the foreground await (with considerable trepidation) the charge of John Sharman's Saxons.  My Hun wing, led by Attila, had a good game, ending up behind the Saxon centre. 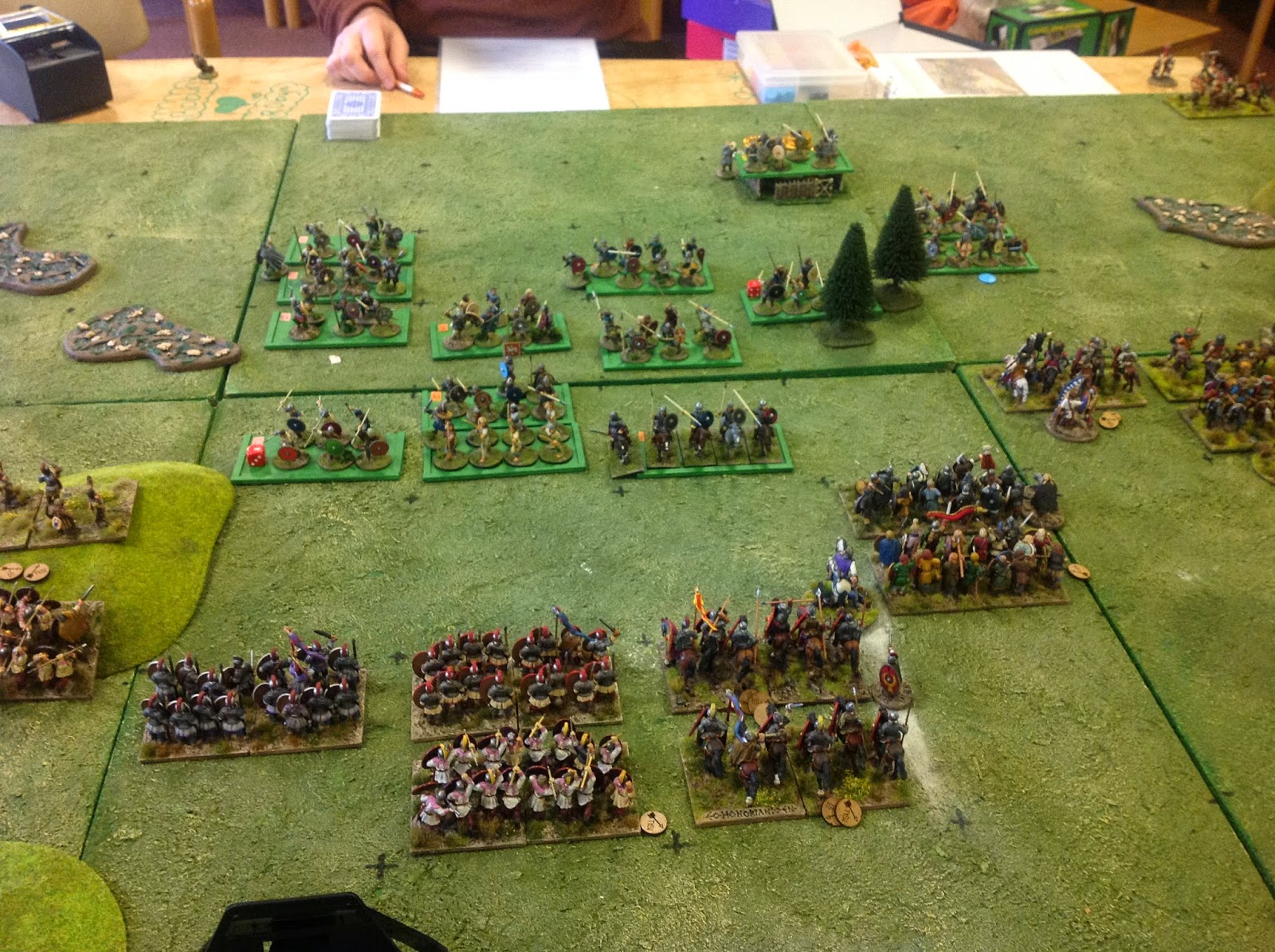 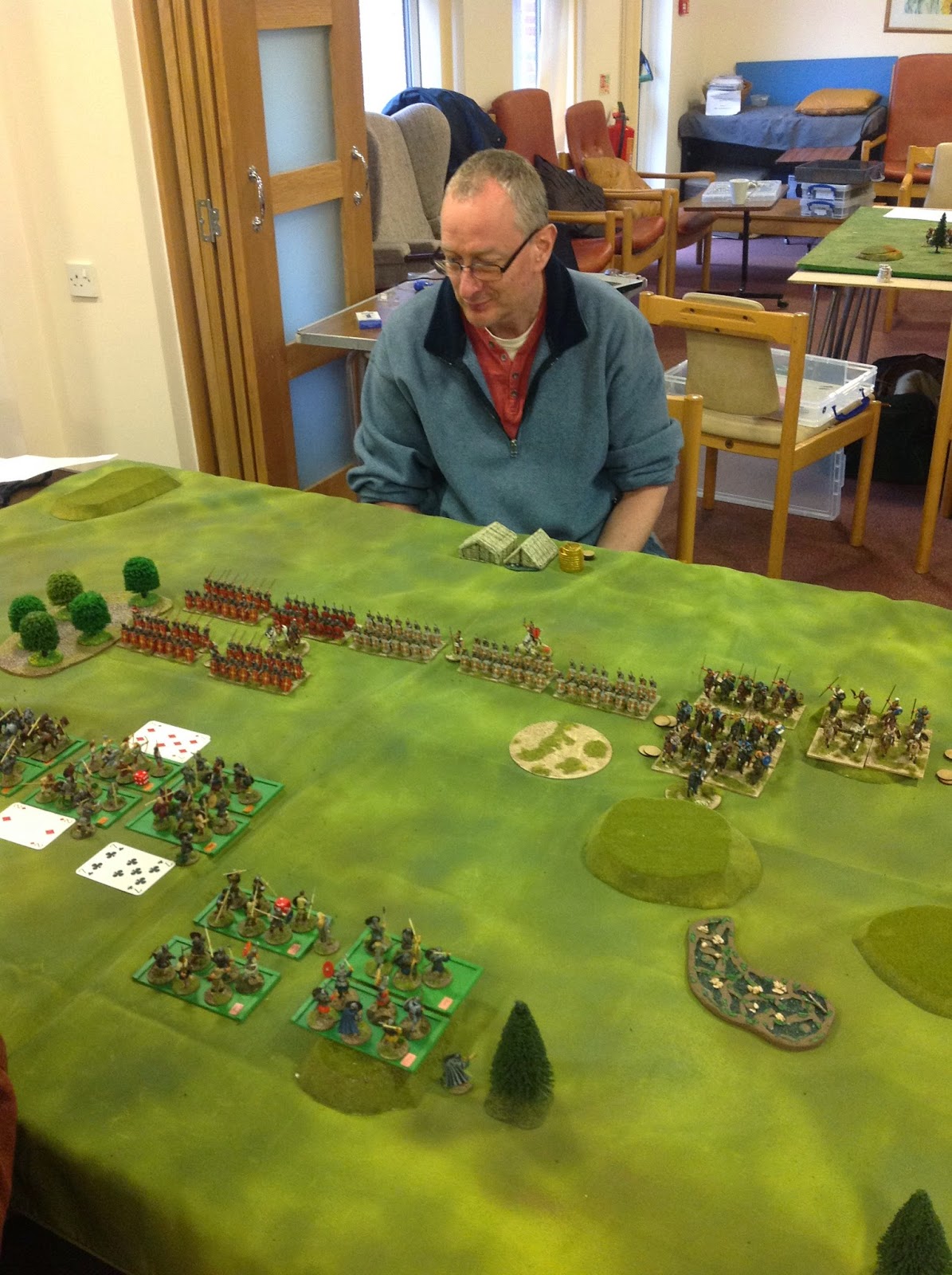 Above is Nick Speller contemplating his own Caesarian Romans- a splendid-looking force (lovely shields and basing) but about to be roughly handled by John's Saxons.  Below Steve Dovers Granadines are menaced by Simon Purcheon's Sassanids.  The Sassanids, with their combination of armour, shooty-ness and mobility did very well indeed and I think Simon came second (or third?) overall.  Looked good, too! 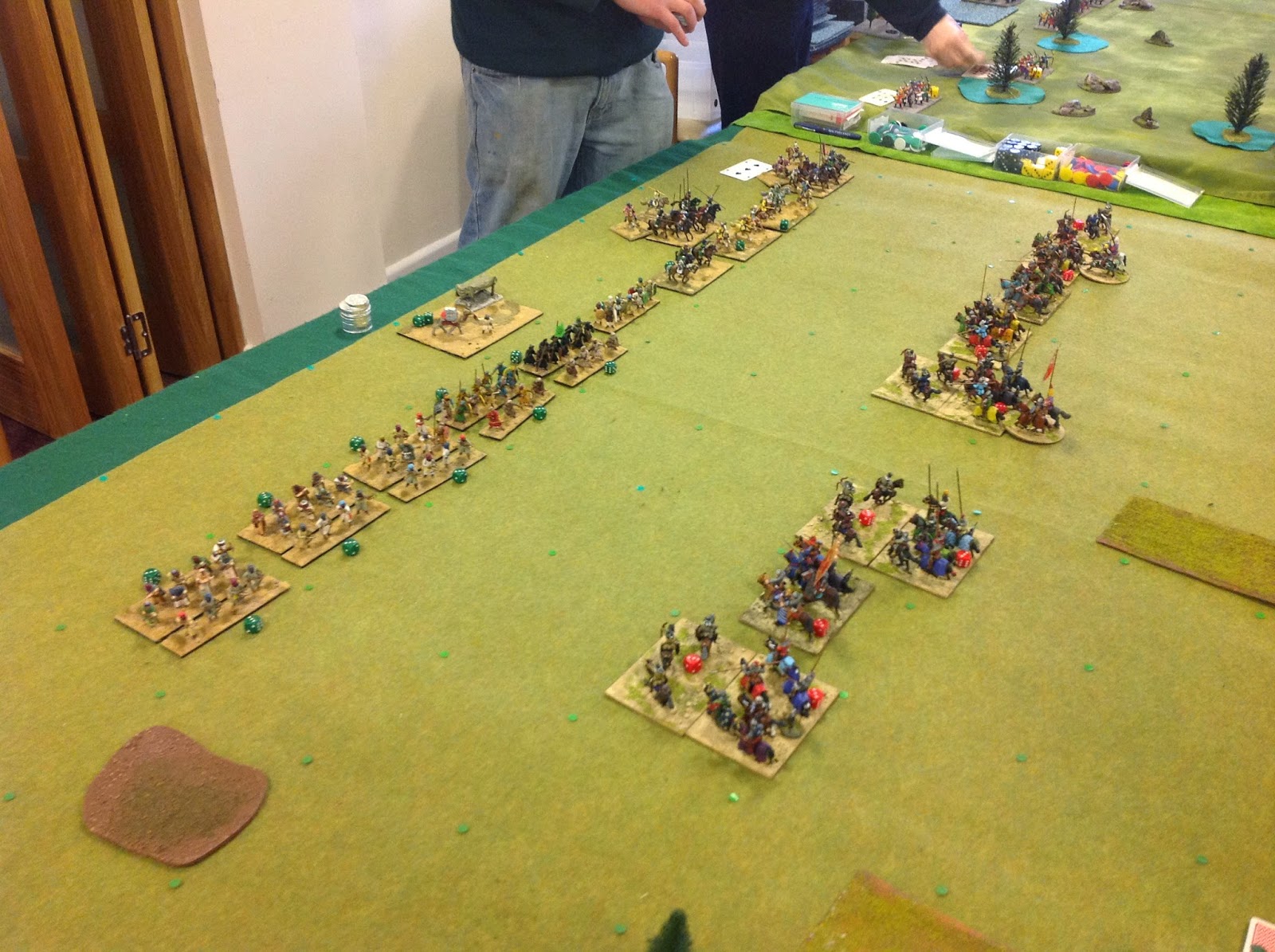 Below my Decline Romans prepare to receive (my own) Early Imperial Romans, played by Trevor Holcroft. The Romans in my force didn't manage to kill anything at all, but their Hun and Gothic allies were lethally effective, especially the former who could do no wrong!  Atilla was again definitely Man of the Match.  Note the edible chocolate victory medals... 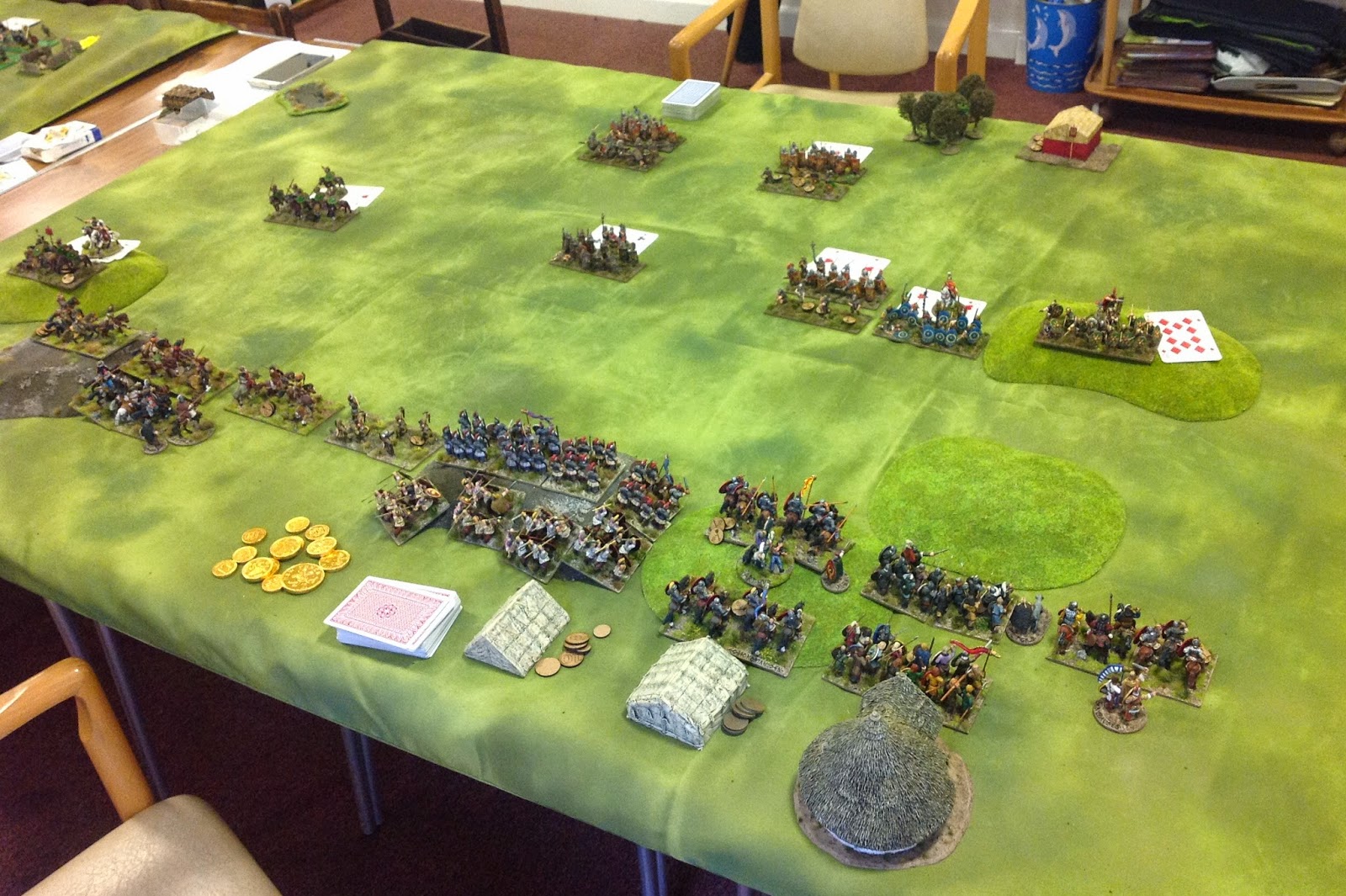 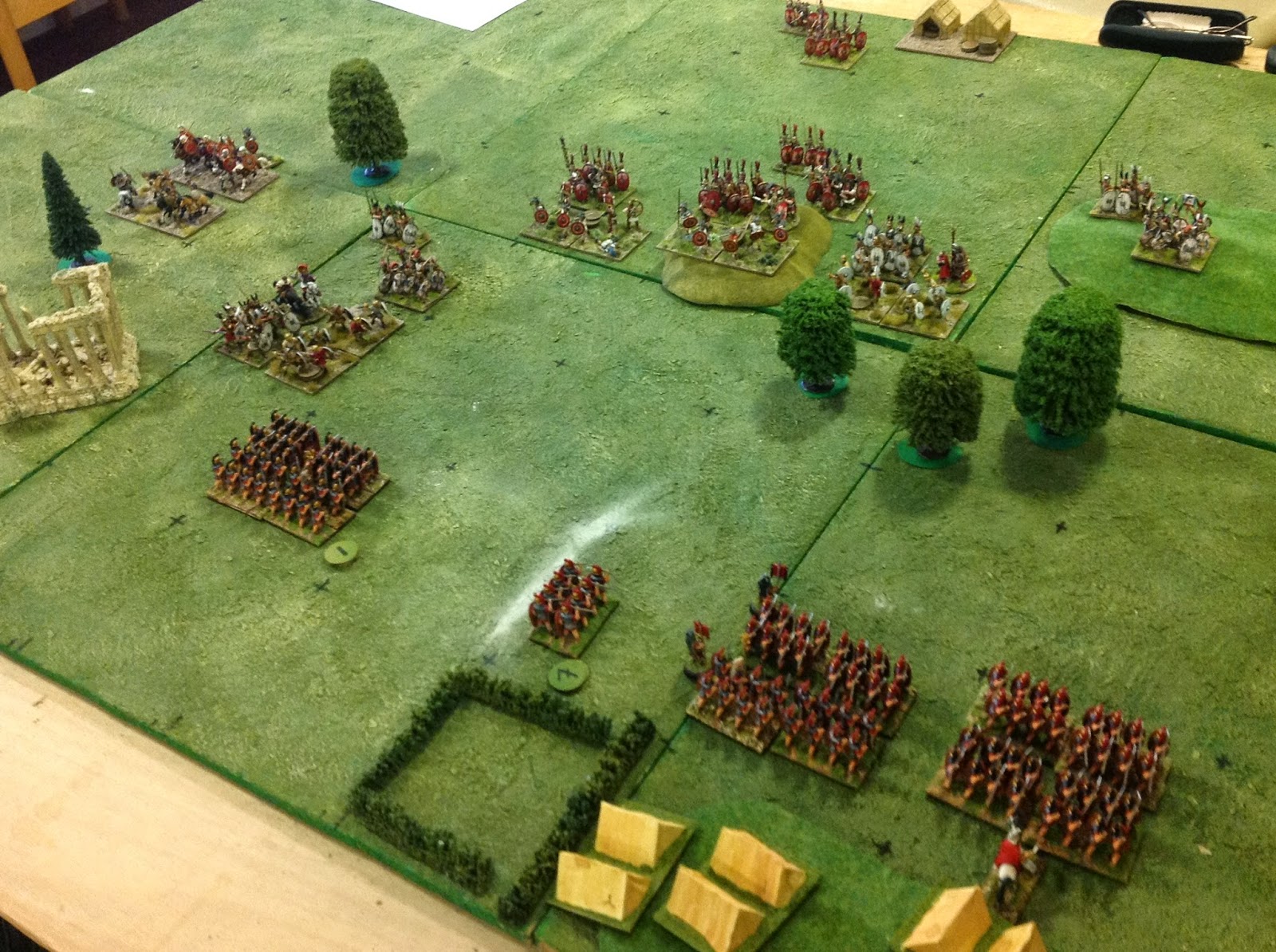 Above Peter Ryding's army of veteran (in two senses) Essex Caesarians proved very hard to kill- my Polybians (played by Ian Notter) seem to be keeping a safe distance!  Or maybe it was just early in the game. 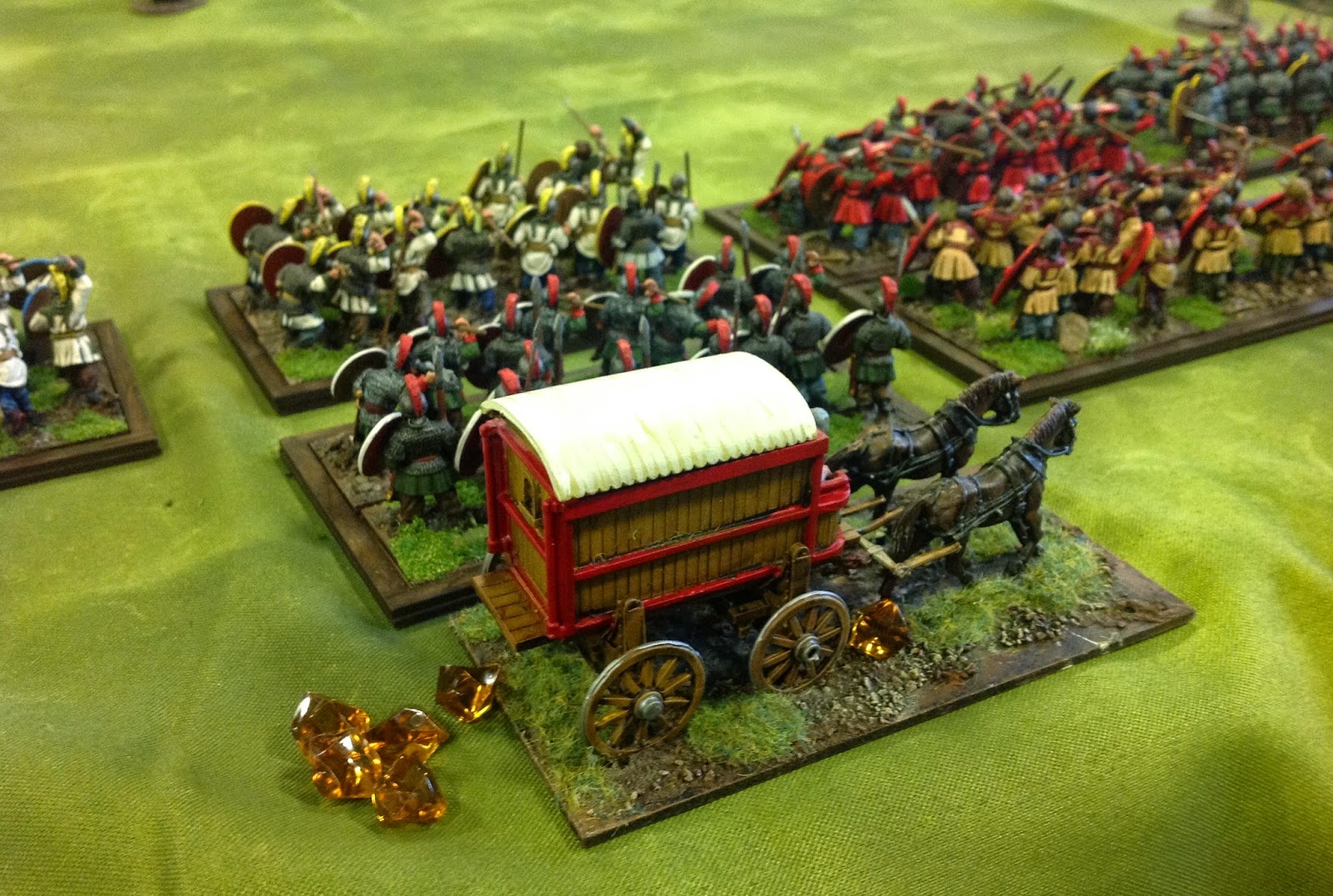 Finally I have a couple of shots of Barry Lee's lovely Late Romans. I particularly covet the Warlord wagon in the above photo. Below, there's nothing quite as good as Late Roman army when it comes to shield designs.  Hopefully Barry and I will be able to stage a Late Roman Civil War at some point later this year.

It was very interesting to see how others interpreted the rules, and to encounter armies which I've not previously experienced on the table.  Bevan Marchand won the tournament with a Hundred Years War English army (sadly I have no photos); shooting armies did quite well.

Huge thanks to Steve Dover and the South Oxfordshire Generals for organising the event. It was a splendid day out and I think everyone enjoyed themselves! I'd very much like to repeat the experience later this year or early next.
Posted by BigRedBat at 19:21