I'm putting on weekend at the Wargames Holiday Centre, in late June, and have been rehearsing some of the games I intend to run there.  Chareronea 86BC is one of my favourite battles, and last night Dr. Simon, Ian, Jay and a new visitor, Steve, fought it to a bloody (and somewhat unexpected) conclusion, using the rules I am developing.


Below are the Pontic host; General Archelaus leads his xystophoroi bodyguard and Scythian heavies forward, whilst scythed chariots and archers screen the Brazen Shields and Slave phalanx. 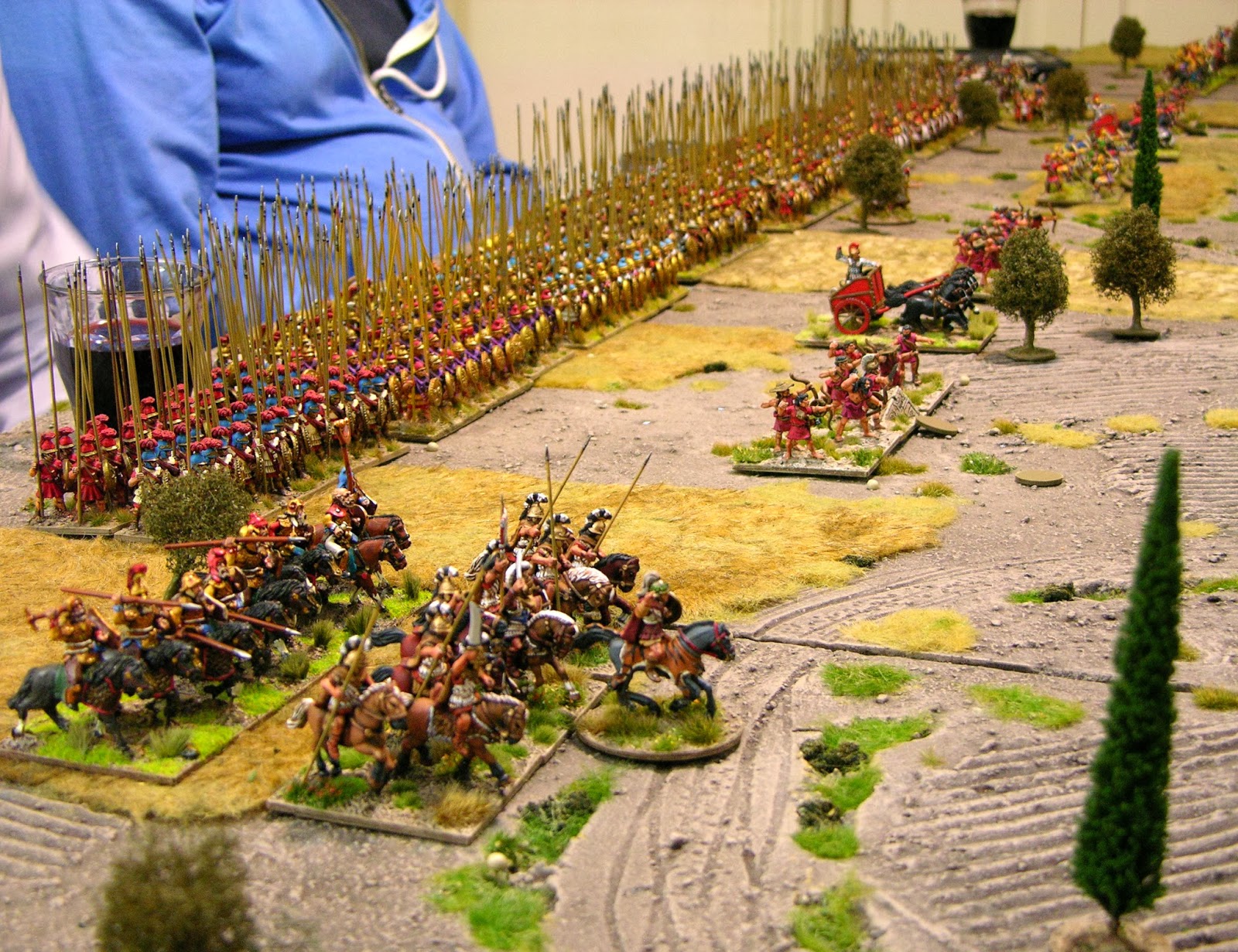 Below, the Roman lne is drawn up, below the acropolis of Chaeronea. 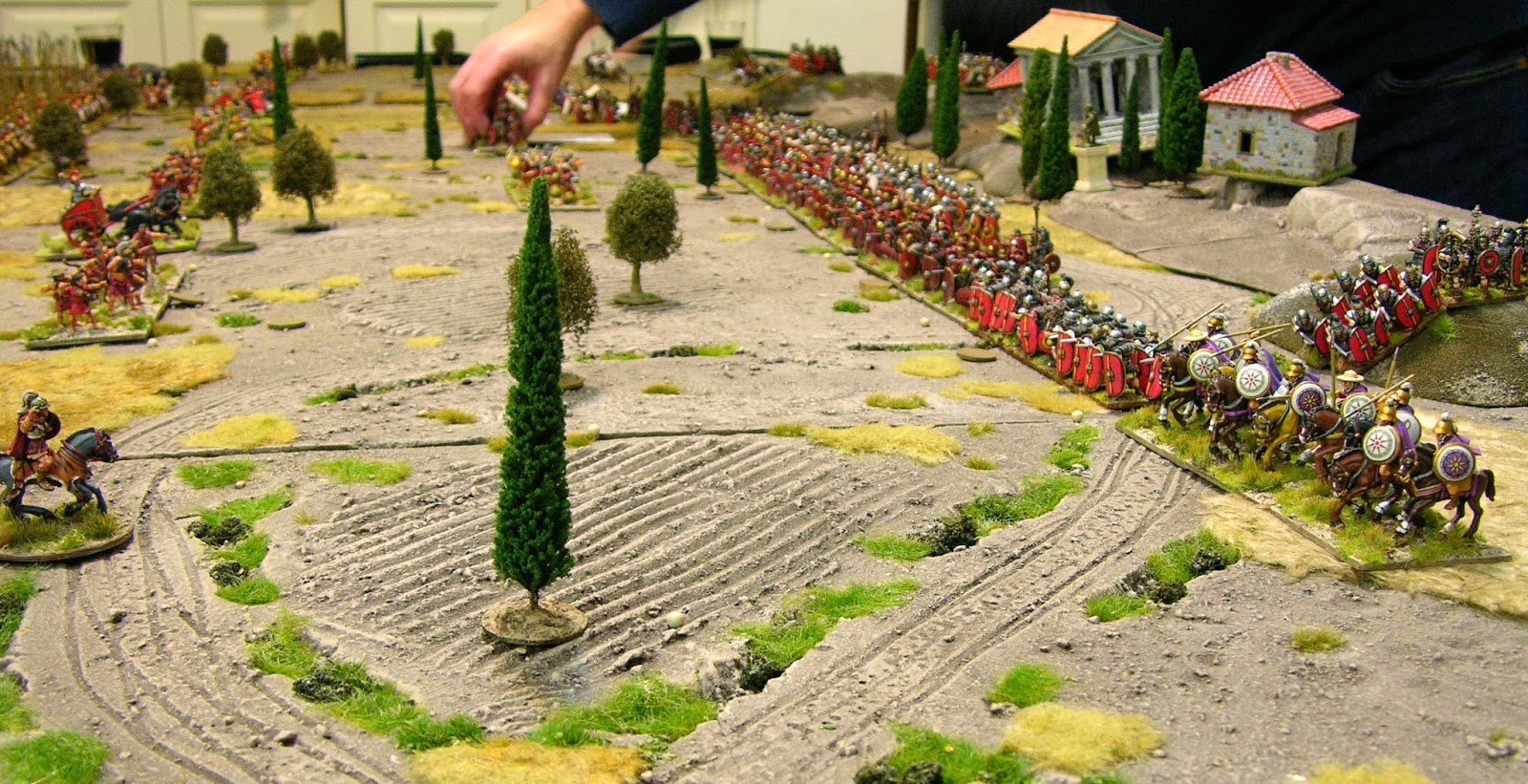 Both sides advanced and battle was joined along the length of the line.  The greek allied cavalry on the Roman left did a sterling job throughout the game, resisting and eventually defeating twice their number of superior-quality Pontic cavalry. 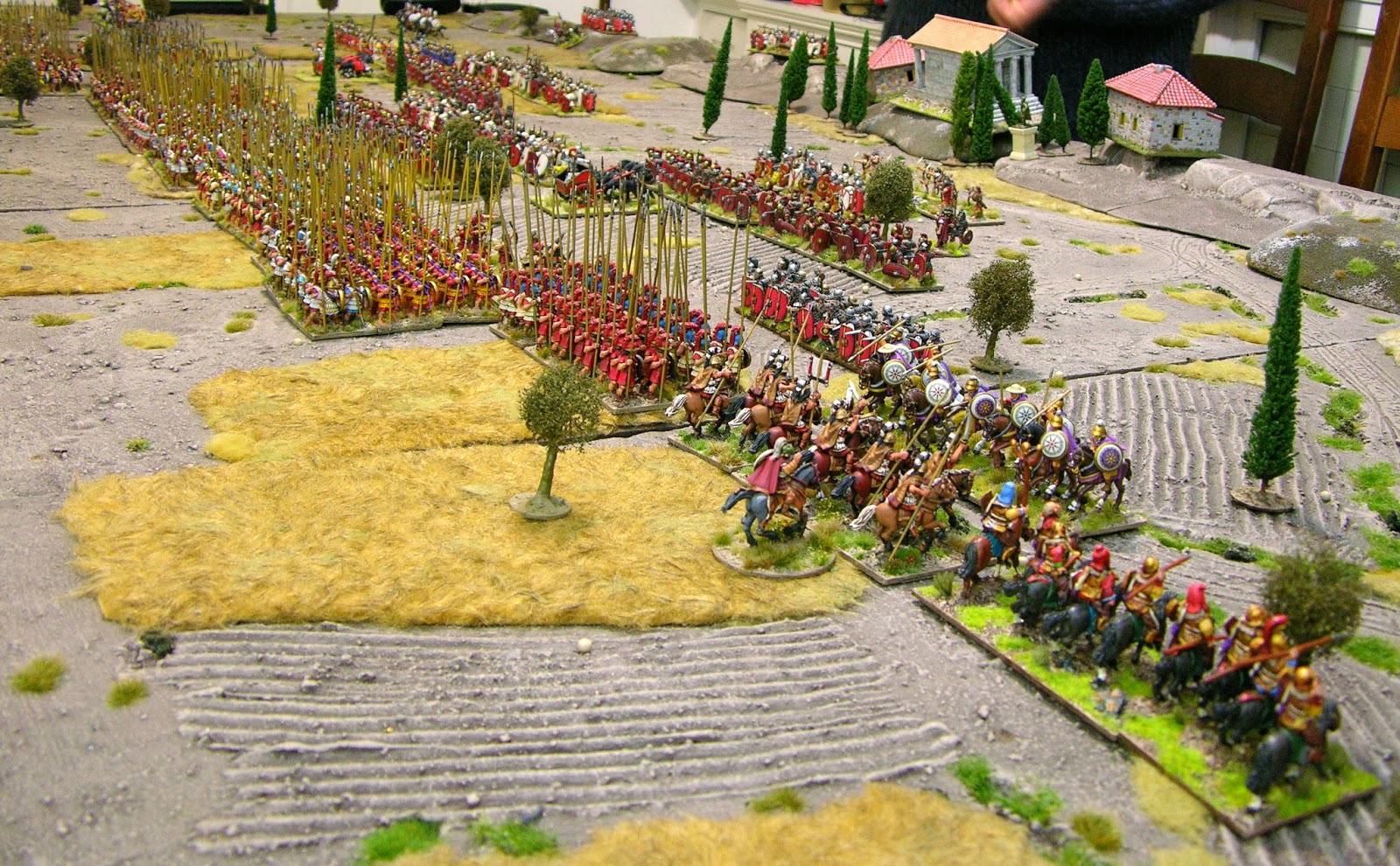 Below, the pert buttocks of the Galatian garrison of Mons Thurium; these were surprised and destroyed by an attack from the rear! 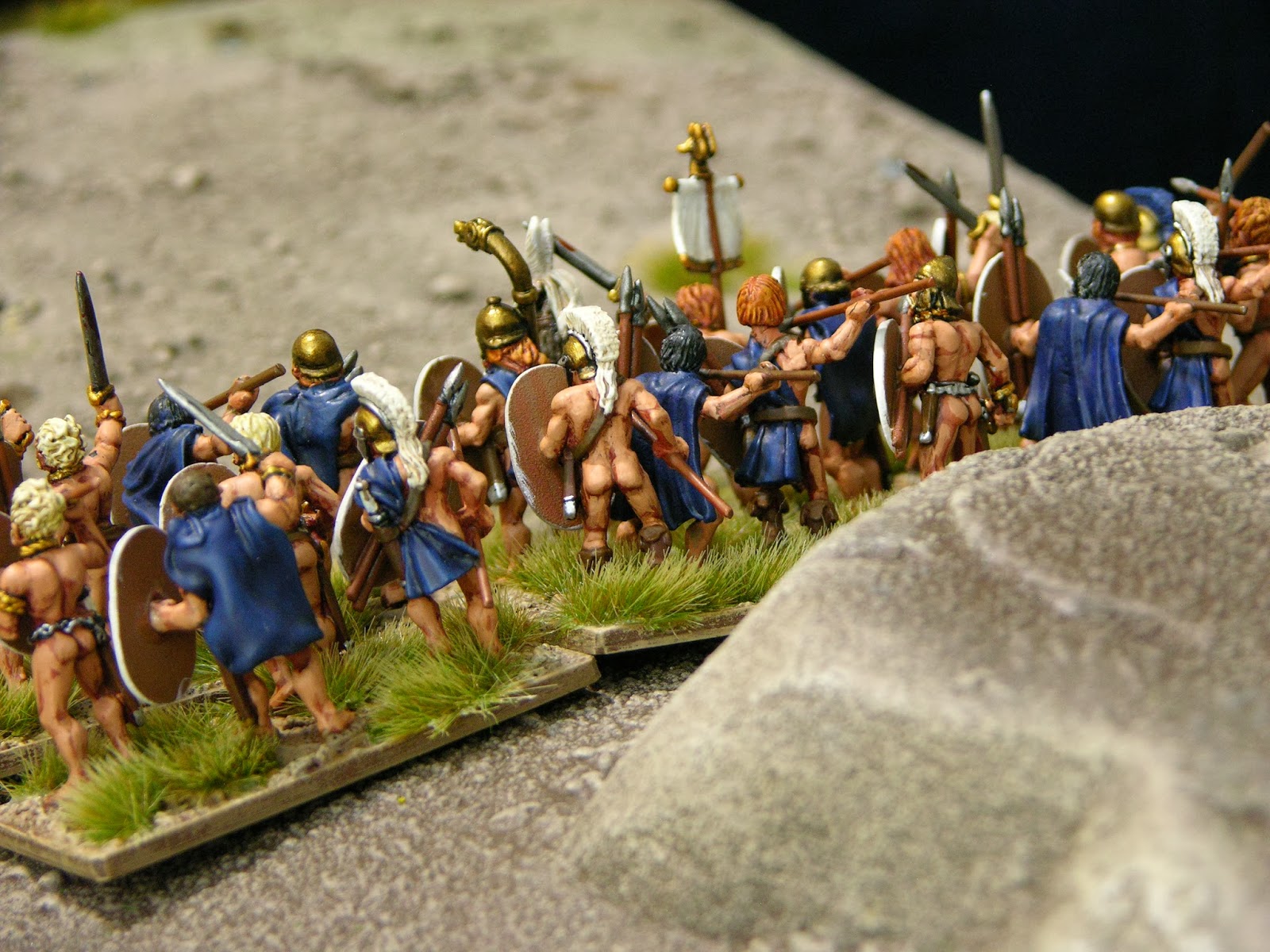 The Romans advanced quickly, but were pushed back by the enemy phalanx.  On the Pontic left, their horse archers and thureophoroi, units which have never previously so much as scratched a Latin, managed to kill several cohorts and the course of the battle began to turn against the Romans. 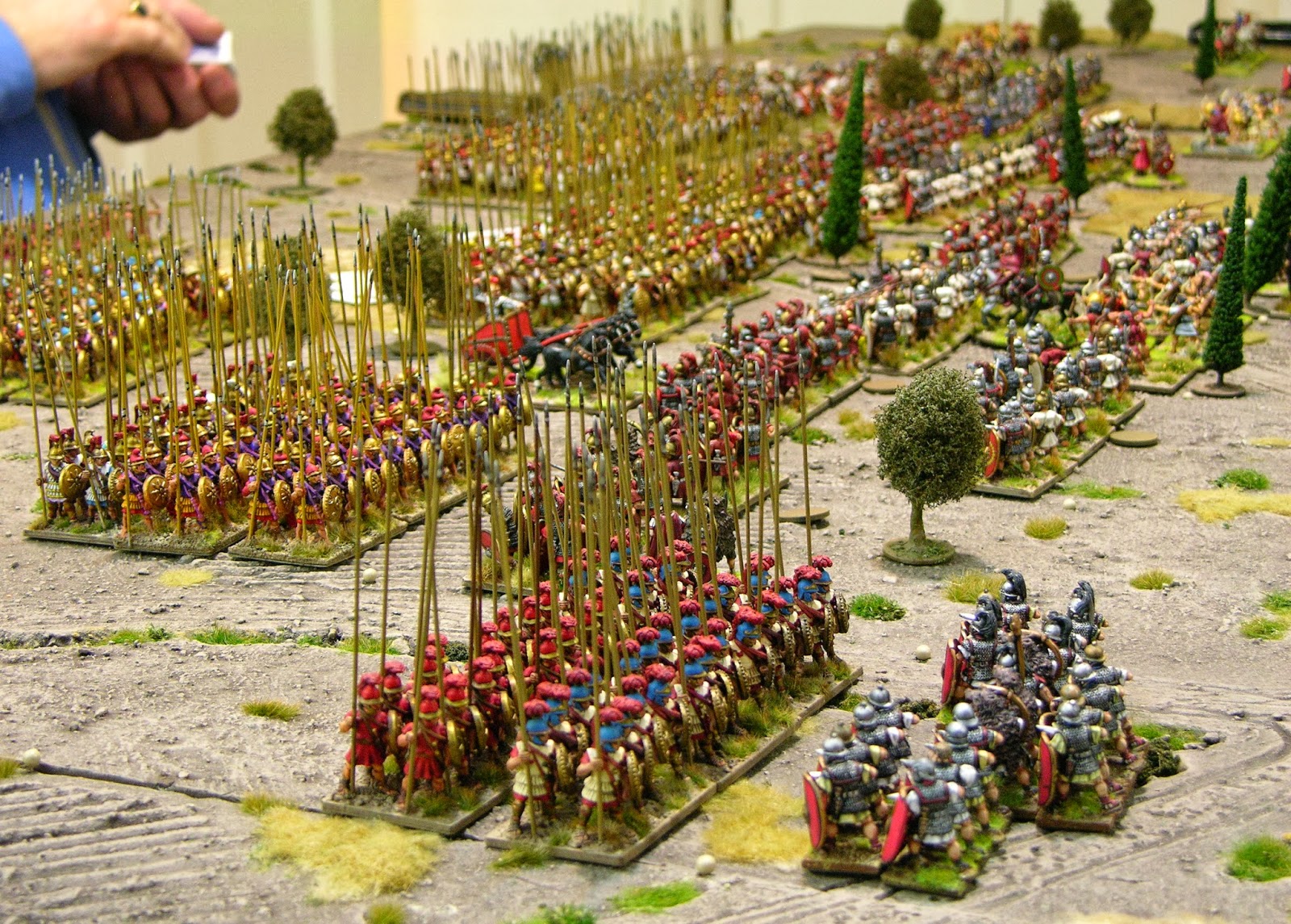 Eventually Pontic pressure all along the line told, and the Romans broke.  It was a close-run thing, though, as by this time, much of the Pontic phalanx was, itself, ready to break.  A little more Roman luck might have seen an entirely different result.  This re-fight was the best ever showing for the Pontics, who have previously been very roughly handled by the Romans.

If you'd like a chance to play this game (amongst others), please drop Mark Freeth at the Wargames Holiday Centre a line.
Posted by BigRedBat at 12:29

Email ThisBlogThis!Share to TwitterShare to FacebookShare to Pinterest
Labels: After Action Reports, Chaeronea