Blimey, still Christmas Day (just) and I've already knocked my resolutions together.  I trust everyone had a great time... and got suitable presents.  I got a fantastic Napoleonic book, that I'll feature in another post, and the Osprey Campaign on the First Crusade.

In 2012 my primary project will be for my Early Imperial Romans, what I'm calling my sixty/sixty/one:sixty programme.  This will involve building up my EIR Romans up to sixty cohorts of 8 legionaries, and sixty auxiliary cohorts/alae of either 8 infantry or 6 cavalry, which (with Praetorians and rif-raf) will give me around 1150 EIR figures, enabling me to fight a medium-sized 69/70 AD civil War battle, at 1:60 scale. To achieve this, I'll need to buy/paint and base something like an additional 400 miniatures over the next year.

My secondary project will be my new Napoleonic habit; first I shall finish my projected 100-man cavalry division, described on my other blog.

...and after that, whatever I fancy of several infantry formations I have underway.  I'd like to think I'll have a complete infantry brigade by the end of March, and at least 2 more by the end of the year.

My third resolution is to paint a unit or two for Glorantha, which I've not really touched for 2 years. In particular, I'm minded to paint the Agimori (tall, desert-dwelling pikemen) that I sculpted and drop-cast the best part of 5 years back (below).  They are pretty crude, but at 40mm tall they are almost literally men-and-a half.  Those pikes need to be able to stop a charging rhino...  I'd then like to do some more Praxian warfare, using Ian's bison and sable nomads, and my lunar war-triceratops and whatnot.  Perhaps I might even finish the long-delayed high-llamas that we needed as mounts for that tribe... 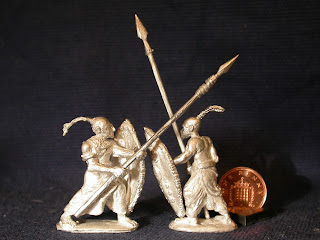 This year I must spend far less than last, and must sell some miniatures from non-core periods, to raise dosh and clear space (be very afraid, my Vikings and Assyrians...).  I do find selling stuff boring, when there are so many minis to paint and blog.  :-(

Finally, this year I shall game more regularly; perhaps not weekly, but at least every two weeks.

That's the lot!  If you have any resolutions, please do post a link in the comments, I'd love to see them.
Posted by BigRedBat at 23:28

Glad to hear Glorantha is back on the agenda. What rules would you be thinking of using these days? HOTT? C&C? I've been considering Basic Impatus Fantasticus.

I'm inclined to rules that favour bigger units (and am having a break from hexes) so I'm thinking, perhaps, Hail Caesar (with a little magic grated on). The game we tried with the War of the Rings rules worked OK, though. Impetus could work, too.

The first thing I want to do in 2012 (better still the last in 2011) is to start a blog. My wife bought me a camera for Christmas to help me with this. The other thing is more games - I managed 60 in 2011 and the target is 70 next year. It would be good to find a few new opponents as well - addiional to my current ones of course. Also perhaps a SoA championship game or two?

Merry Chrimbo to you and yours!

Keep up the great (and inspiring) work on your blog.

I stand amazed at the Agimori. Lovely work!

It sounds like you have another busy year ahead, BRB! Good luck, and I'll look forward to following your progress. All the best to you and yours for 2012!

Thanks all! Wishing you a Happy New Year, slightly in advance, like my resolutions. ;-)

Happy New Year to you too, Simon!

Happy new year to your blog )

Gabreile, one thing is certain about my blogs; there will be very many Romans....

Love to see that there are others out there that completely eclipse my madness the amazing thing is i recon you get the all done. I've almost compiled the figures that i'll post off to you soon, there are a few more than i thought but that's all cool I ended up painting 160 miniatures in 9 days of madness oh the fun. I look forward to keeping up with your progress during the year.
Cheers
Kent

Kent your paintathon was bonkers; I think I managed to (almost) finish 8 minis in the same time period! I wasn't working nearly as hard though...

Good luck my friend, my painting has sort of dried up...

Never enough of your Romans for me. All the best in 2012 and good luck with resolutions.

Thanks szepard! Lots of Romans to come. Maybe even some Poles, at some stage...

Simon, get back on that bike. How about some more Naps? I'm belatedly getting into them...