Hank at Gorgon Miniatures ( http://www.gorgon-studios.com/?page_id=2 ) in the US was kind enough to send me some samples from their range of Steve Saleh-designed Spartans that were formerly sold through Amazon, and a Saleh Persian miniature that I believe is a giveaway with orders (rather than a precursor to a new range).

Now I've previously seen images of the excellent Spartans (I may do a size comparison shot, later) and one of the painted Persian, but not a size comparison photo of the Persian, so here he is sandwiched between an OOP Foundry Persian and a Polemarch Successor phalangite, also both sculpted by Saleh. I'm not particularly knowledgeable about Persian equipment so I won't comment on that; but the hand is designed to be drilled out for a spear, which marks a major improvement over the previous Persian, whose spear appears far too thick! 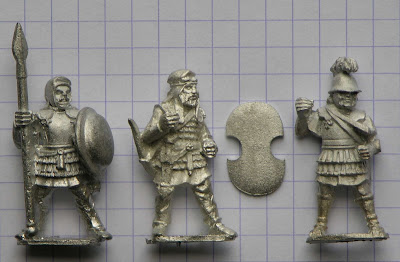 The Persian is a delightful figure, full of character. The detail is really crisp and, anatomically, it is superior to the previous Persian, IMHO. The height matches his other, larger 28mm ranges.

There were rumours, a year or so ago, that Steve was going to do a Persian range to complement the Spartans. Having seen this mini, it would be really great if he did! But I hope to see the Polemarch Successor range and the Gorgon early Etruscans finished first, especially the latter as I'm becoming very interested in the early Italina armies.
Posted by BigRedBat at 11:30