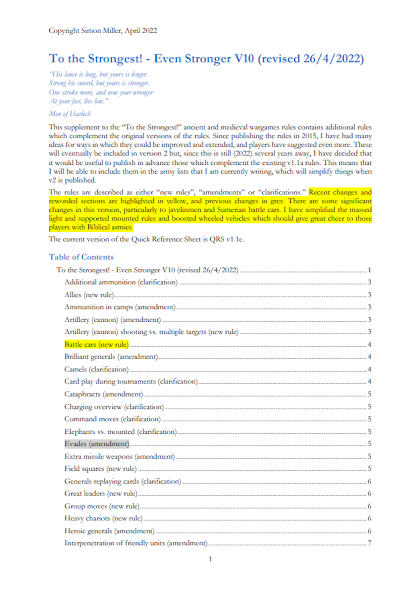 I've just published an updated version of the Even Stronger Rules Supplement- the first in over a year. There are a handful of changes, notably a new troop type, straddle cars, which I hope will help to raise interest in the Sumerian and other Third Millennium armies. There is an interesting, significant change to javelinmen. There's an extra ammo chit for all wheeled vehicles such as chariots. I also simplified the (formerly somewhat Byzantine) rules on massed lights and supported mounted. There are sundry other minor changes. If you've previously downloaded it, I've sent you an update link. If you haven't received it you can download it here.  It's free.
Late this week I'll publish an updated version of the Ancient Army List eBook. There are three new lists, and quite a few other lists will have some revisions, in particular the Third Millennium lists which are receiving something of a spring clean.  If you've previously bought  the paid-for version, I'll send you an update or a link.
Posted by BigRedBat at 13:04

Excellent. I've had enough of fantasy wargaming at present and this is a good excuse to head back to historical.
Unless of course there happens to be a TtS fantasy rule book around the corner.😁