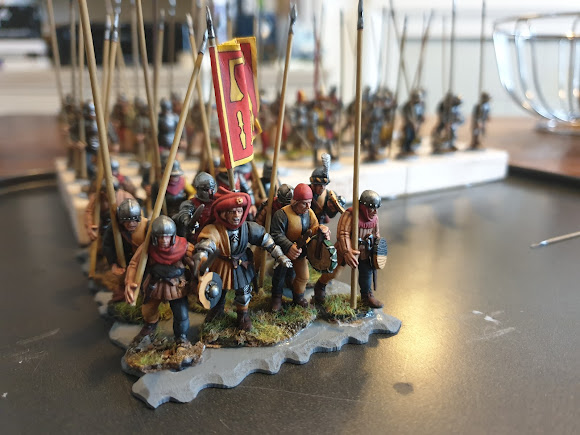 Whilst building the Swiss army I have picked up a lot of figures that are really well painted but which look slightly less Swiss, to me, than most. This can be because they have padded gambesons, which one doesn't see a lot (any?) Swiss in, or have shields. The front rankers above were superbly painted by David Imrie but fall into this category. I also have quite a few other minis painted by Shaun McTague that look rather northern European. 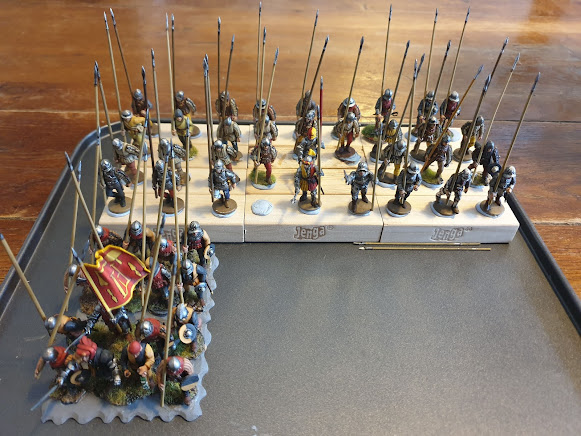 I have decided to use a lot of these minis in a different army. They will become Low Countries city militia, from Ghent or Antwerp or wherever. Apparently these militia came to the musters dressed in distinctive colours city or guild colours, such as red and yellow, which is very convenient as I have a fair few in those colours. I can give them guild flags, the one in the image which is from the Perry box art. These will become a block of 48 in 4 ranks.

I can then use them in various armies within the Medieval Army List book that will suit- notably the Low Countries list, Burgundian and the Hapsburg Burgundian lists, so they should see some action! I have lots of similar unpainted minis, too, so other formations can follow in due course. I'd like to be able to field the armies for Guinegate 1479.

In other news I came across some rather well-written TtS! medieval scenarios on another site- well worth a look!

Well, you wouldn't want to waste such lovely figures, would you?!
Best Iain

The look the business, currently Swiss pike on my desk too

You're going to need a bigger basement! :-)
Great find on the site with the scenarios, Simon!