Yesterday I drove (through dense fog) up to the Hereward show in Peterborough to help James Morris and Scrivs lay on a fantastic game using parts of their "El Cid" collections as previously seen in the excellent eponymous Warhammer Historical publication. We gamed the battle using my To the Strongest! rules and the newly-written Andalusian and Early Feudal Spanish army lists.

The scenario was written by James and featured an attack upon an Andalusian army led by the Amir of Zaragoza, returning from a raid and encumbered with loot, by the forces of King Alfonso I "the Battler" of Aragon.

Here are some random shots I took of the two games on my phone. All the pics are "clickable". 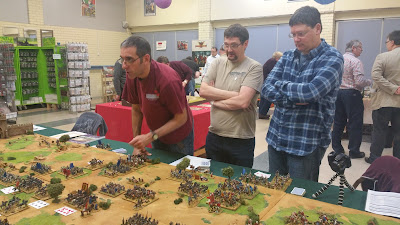 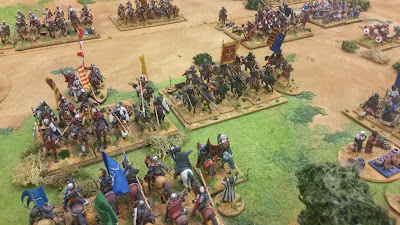 Above Alfonso leads the charge in the first game. I've rarely seen a game where the cards were so favourable to one side; he broke right through the Andalusian lines and took a camp. Below is the Andalusian Emir, at the head of a stunningly painted bodyguard. 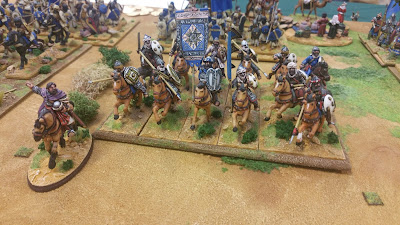 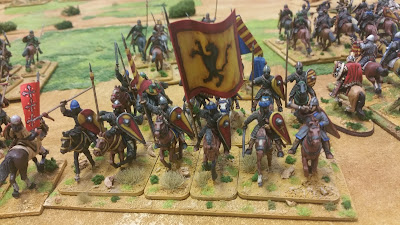 Above are some more Spanish caballeros; all of the units had super hand-painted banners. Below, Scrivs has been on something of a painting spree. I asked about the lettering on the banners; apparently it is genuine Arabic poetry that he has copied by hand. Astonishing! 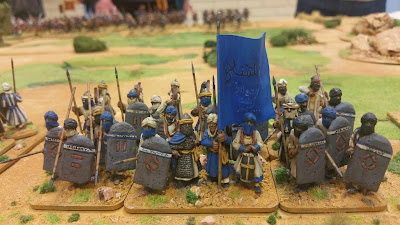 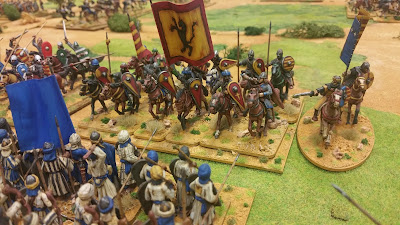 The Aragonese caballeros, above, with Alphonso leading the charge stormed to a swift victory in the morning, but were repulsed and defeated in the afternoon game.

The layout included the gateway of the city of Valtierra, modelled by James, shot here from outside: 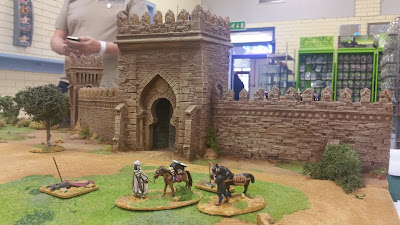 and below, from within. 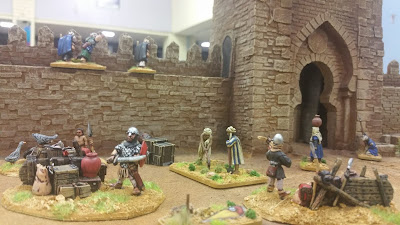 And lastly for Valtierra we have a pic of Scrivs, yours truly and James Morris; it was such a pleasure to game with their great collections! I seem to have become an irregular Newark Irregular. 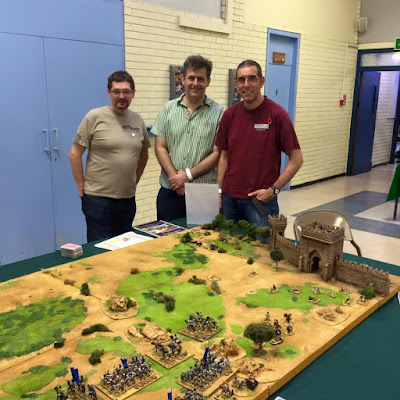 I failed to get pictures of the other games which included Huntingdon's "Stop the pigeon" which was a big hit with the kids, and a very impressive Dambusters game. I did take a picture of a demo game of Dan Mersey's coming "The Men who Would be Kings" rules, which was being run by Guitar Hero Andy on a couple of my wastelands gaming cloths. It looked great and like a lot of fun! Oh, and I had an enjoyable interview with the Meeples lads. 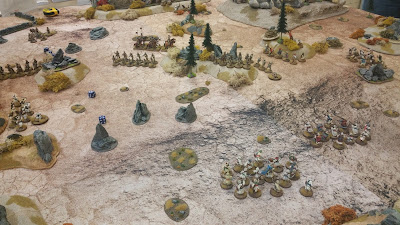 The Peterborough show was very impressive especially as it was the first show there. There was plenty of room, the ceilings were high, the lighting excellent and the food and drink very satisfactory. The Peterborough Club (especially Mike Whittaker) did a fantastic job and I expect the show to become a regular feature of my wargaming calendar!
Posted by BigRedBat at 23:34