(This article was originally published in issue 69 of the excellent Wargames, Soldiers and Strategy magazine). 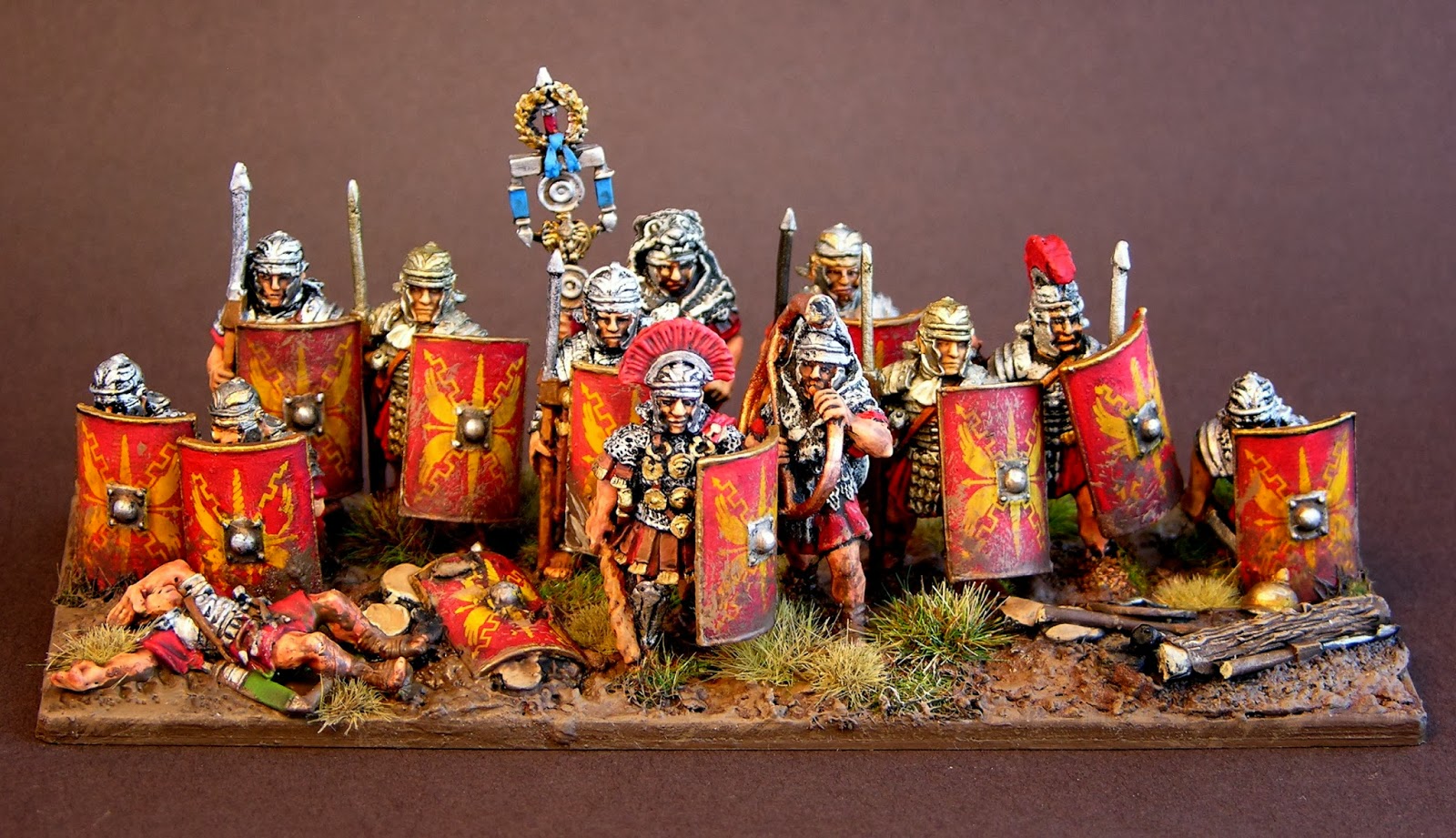 “One day I devised myself a plan, that should be the envy of most any a man...”

In the country classic “One Piece at a Time”, Johnny Cash’s character describes how, over a 21 years period, he built a Cadillac, from a mass of ill-fitting parts that he stole from a production line.  I’ve employed a broadly similar (but happily entirely legal) strategy, to assemble the very large armies that I use in my ancient gaming.  My technique involves acquiring masses of painted miniatures from many different sources, and later, retouching and rebasing them so that they work together as an army.

I only ever buy miniatures from ranges that I really like, as there are few things more frustrating than spending hours painting ugly miniatures.  Luckily, my catholic tastes embrace pretty much anything sculpted by Marc Copplestone, Steve Saleh or the Perry twins, or Aventine’s Adam, amongst others.

As the precious brown-paper-wrapped boxes of precious minis plunk heavily onto my doormat, I open and check them, and store them, by army, in box files up in my loft.  I track the approximate numbers in each mustering army in a spreadsheet, because it’s so easy to forget what’s up there!   The quality of such purchases can vary from the sublime (superb miniatures painted by Andres at Einar Olafson Painting or Redzed) to the ridiculous (hideous train-wrecks of paint jobs from eBay, fit only for the stripping jar).  I do my very best to avoid poorly painted purchases by looking carefully at the photos on the eBay items, but one sometimes just has to take a punt. 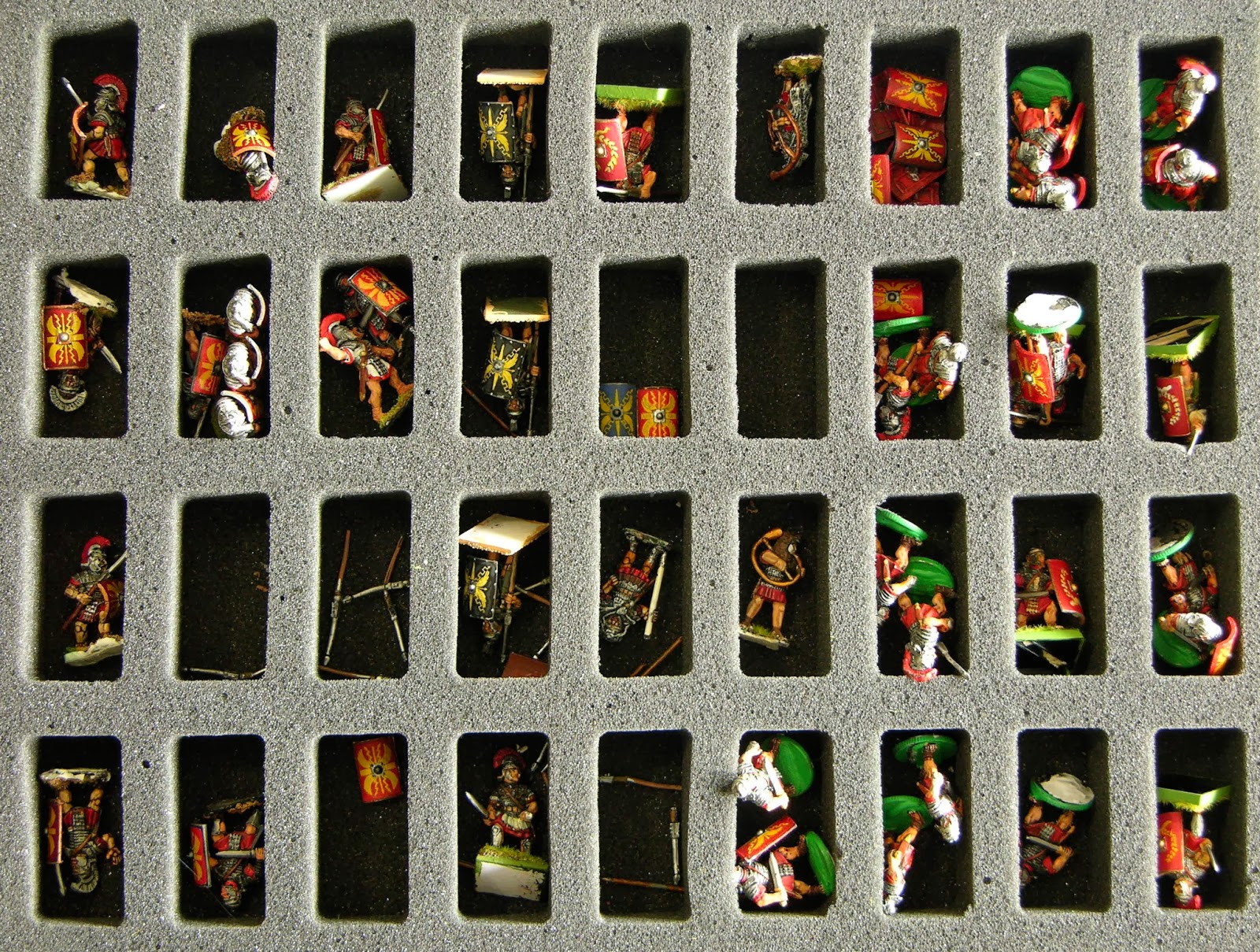 (At the time of writing the author has accumulated some 1800 28mm part-painted ancient or Napoleonic miniatures.  Here are some Perry Romans...)

One day, my interest in a particular army will suddenly be piqued by a film or book, or plans to put on a display game at a show, and I’ll climb the ladder, find the appropriate file box and open it to see what’s in there.  More often than not, I’m pleasantly surprised to find some decent purchases that I’ve long forgotten making.  Next, I sort the minis out into their respective units.  When there are several very distinct styles of painting, then these will go into separate units. 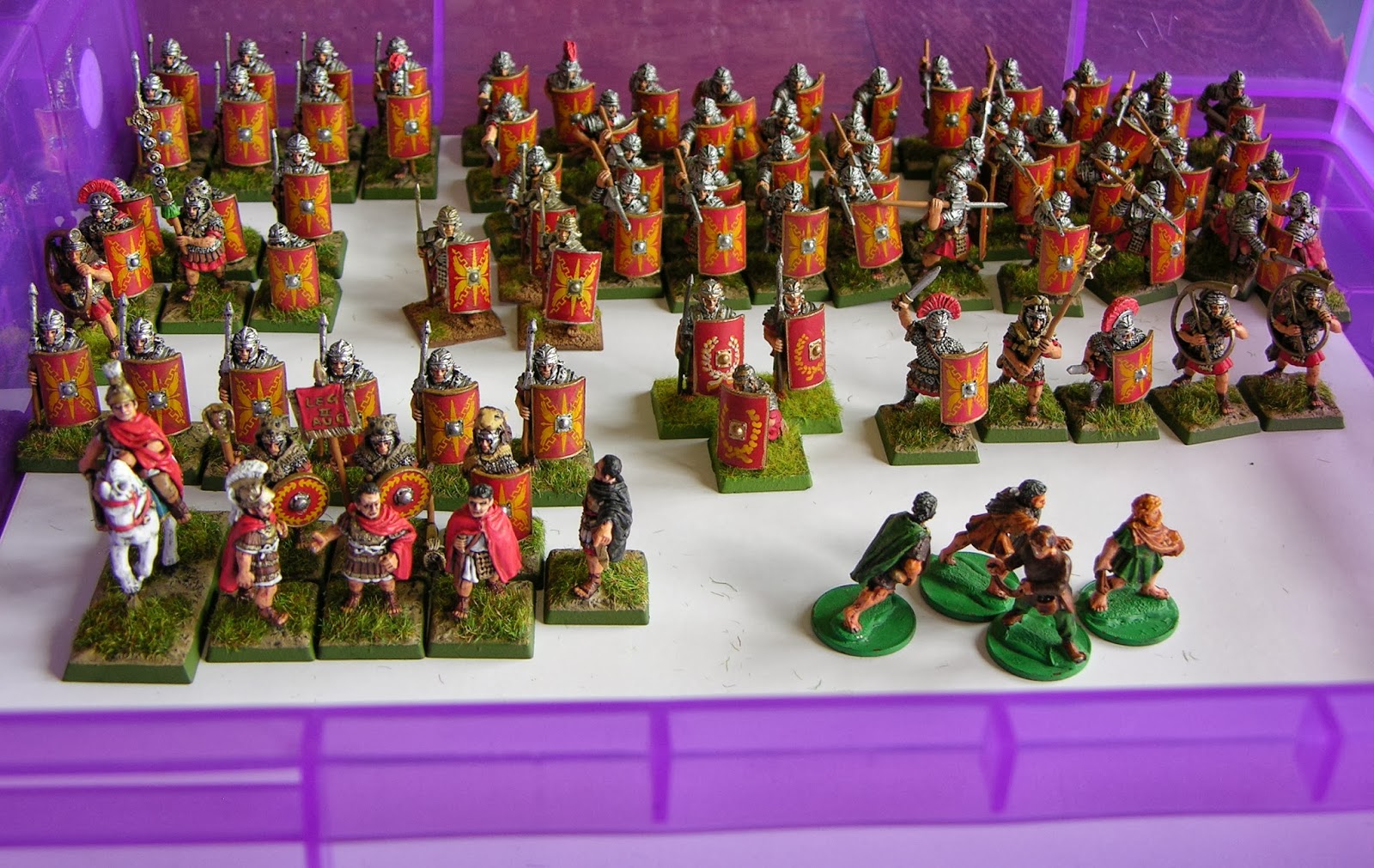 (mustering the cohorts of an Early Imperial Roman army)

When a unit is short of minis, then I “climb the lead mountain” to find the necessary miniatures required to bring it up to strength.   As I (all too) regularly buy unpainted miniatures that look like “bargains” to me, there’s a pretty high chance that I’ll find what I need!  If not, I more often than not find that I can often swap for the required minis with one of my fellow leadaholic mates. 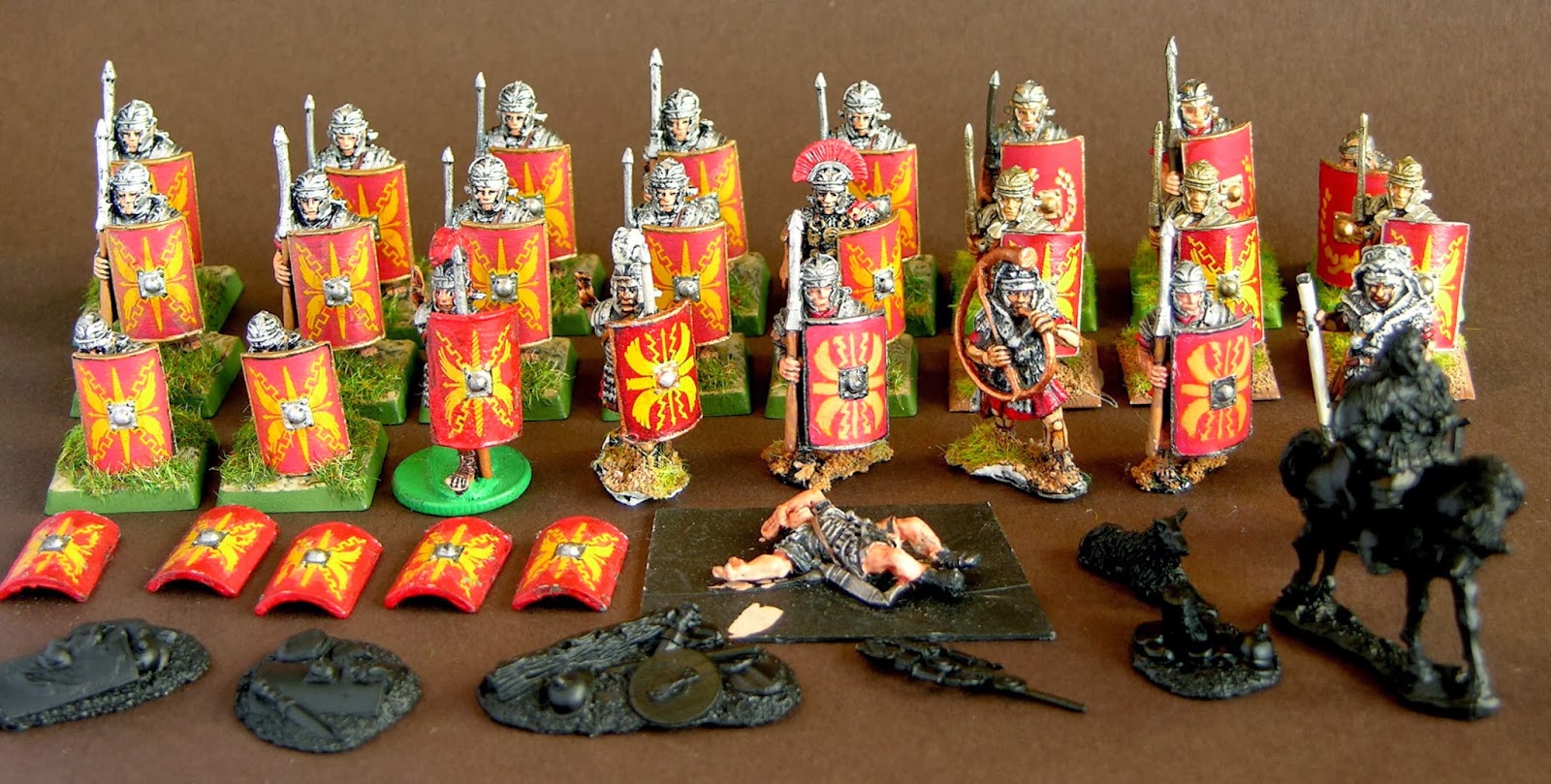 Before painting, every painted miniature will be removed from its base.  I must have cut a thousand or more minis off plastic WAB bases!  Where possible, I like to retain some of the grout and flock around the feet, as this saves time later on, when basing.

I should remind readers, at this point, that Dante Alighieri reserved a special corner of his Inferno for those gamers who superglue miniatures onto coins or washers.  It is very difficult to remove these safely, and so I try very hard not to buy such figures.  Personally, when I need to stick a figure to a coin I use wood glue, which is quite sufficient and facilitates re-basing.

Any unpainted miniatures are assembled, cleaned and primed.  This is also the best time to effect repairs on broken weapons and to replace any missing shields.  I temporarily mount all the miniatures on my trusty wooden Jenga blocks, ready for painting.

“Now the headlight’ was another sight, we had two on the left and one on the right, but when we pulled out the switch all three of ‘em come on”

If one has accumulated a bunch of miniatures from a number of different painters, in a number of different styles, there isn’t a great deal of value in trying to finish them off so that they all look identical.  This would take a great deal of time as many would need to be substantially repainted.  It’s far better to capitalise upon the differences in style by giving the unit an “on-campaign” look, with different coloured tunics or trousers, and a variety of different shield designs.  I find that others paint miniatures in imaginative ways that wouldn’t necessarily have occurred to me, and I try to retain as many of these quirks as possible.

Some paint-jobs will invariably have taken some punishment, either in use on the table, or in the post, so next, I touch up any chips.  Sometimes, I’ll repaint lurid tunics, or over-paint flesh when someone has gone overboard with the black-lining style.  I’ll usually go on to add a single highlight, where none exists.

Stains, such as the sadly defunct Games Workshop Devlan Mud, and Army Painter Strong Tone ink wash, are excellent for bringing out detail on figures that have been simply block-painted, and also cover a multitude of sins.  Moreover, a thin ink wash, delivered in a medium such as Klear floor polish, will very usefully darken the skin tones of lighter-skinned figures, so that they better match other darker-skinned ones from the brush of a different painter. 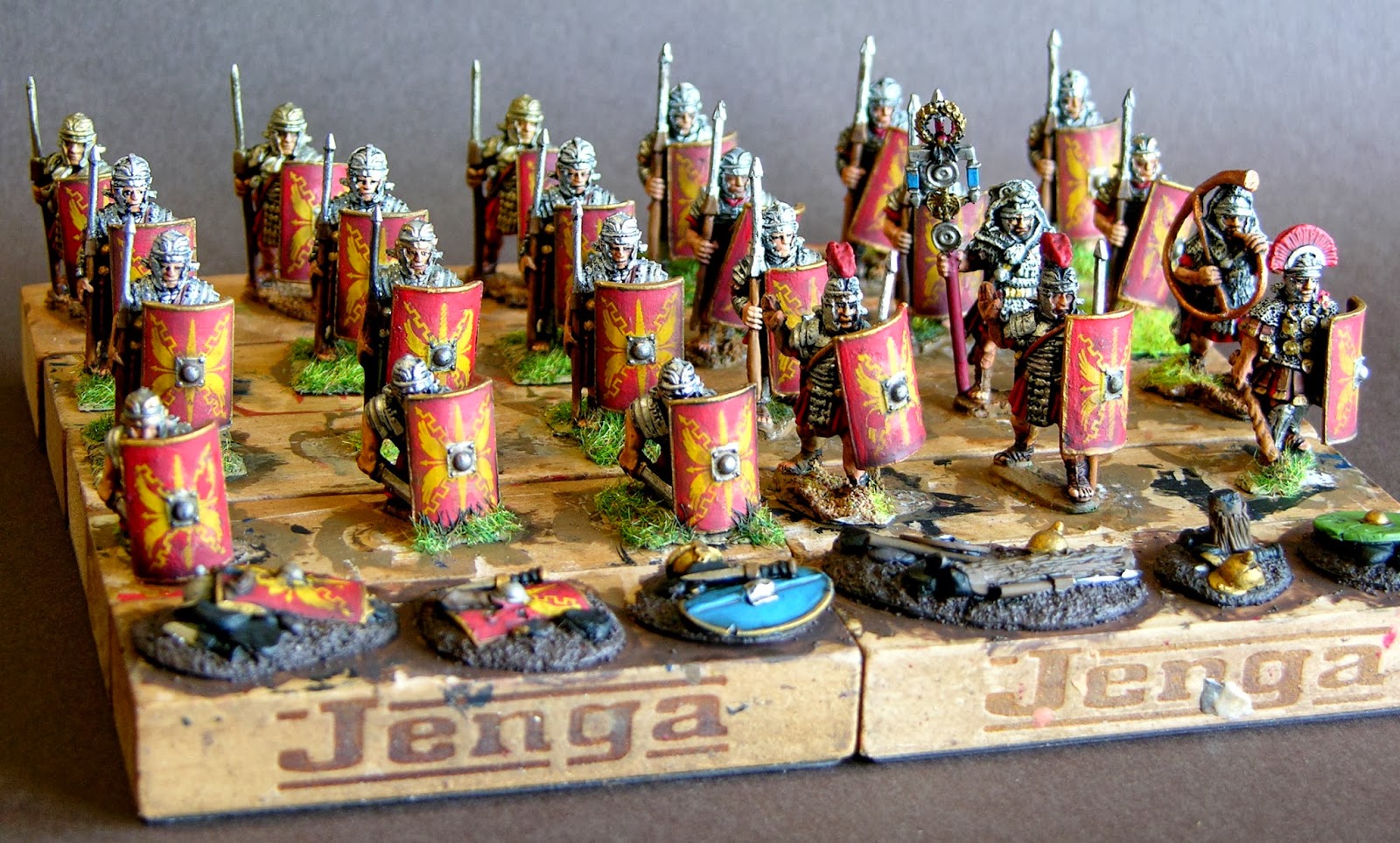 (The cohort temporarily based for painting, retouched and stained with Army Painter Strong Tone)

Next, the retouched miniatures will all need to be varnished.  I usually use a Halfords spray gloss lacquer, for protection, flowed by a couple of coats of matt Testors Dullcote spray varnish.  After matt varnishing, I always spend a few minutes highlighting metallics as it really makes the minis “pop”.

“Now, up to now my plan went all right, ‘til we tried to put it all together one night”

The final stage is basing.  Having saved a great deal of time by using ready-painted miniatures, I feel I can afford to lavish time on the basing, which is the part of the process that turns figures I’ve bought into a unit that feels my own.  Moreover, with the miniatures having come from so many different sources, it is critical that the basing is both uniform and of good quality, so that the army works together, as a whole.

I’ve talked about my basing techniques in a previous article (WSS 65); suffice to say that the key elements are: a large magnetic base; pre-coloured grout; dry-brushing and the use of a great many different varieties of flock and tufts.  I also find that incorporating scenic elements, such as rocks, shields and even small trees, can add a great deal of character.

As an example of this process, over the last few years, I’ve been accumulating odd batches of painted Foundry Perry Early Imperial Romans, when they have come up on eBay at the right price.  Recently, I managed to purchase a small and quite nicely finished army, which gave me the critical mass I needed to push the project on to completion.

I gave a little thought about how to make the army different to several other EIR armies I‘ve collected over the years.  Inspiration struck; why not emulate the look of the extremely grungy Roman army at the start of “Gladiator”?  Re-watching the battle scene at the start of the film, I noticed that Ridley Scott filmed with an extremely subdued colour palette.  The wet, dirty, clothing of his legionaries could easily be simulated by ink washes.  Moreover, their shield designs could barely be made out through mud and water staining (which would helpfully conceal the unevenly-applied transfers on my minis).  I also noticed that the vegetation was sparse, with little grass, and that there was a great deal of sticky-looking mud.

To add flavour, I decided to make a few strategic purchases including a 1st Corps “General of the Northern Armies”, complete with hound, and a Gripping Beast “Aged Roman Emperor”.  I also quickly discovered that 1st Corps also manufacture some handy battlefield debris, which would add interest to the bases.  I also bought some Wargames Foundry horses on eBay to match some Gripping Beast Roman auxiliary cavalry riders, that I had left over from a previous project.

I decided that the large scenic bases used with the Impetus rules, would enable me to use the miniatures to create attractive dioramas.  Before painting the entire army, I thought I’d finish two elements, to check that my approach would work.  The figures I selected (shown in one of the photos above) represented the work of at least half a dozen different painters, of varying degrees of competence.

I went for a darker earth colour than usual on the bases and used satin washes to make them look wet and muddy.  It only took three painting sessions to lick the miniatures into shape, and two further sessions to base them; perhaps 15 hours of work, in total, far faster than I could have painted them from scratch. 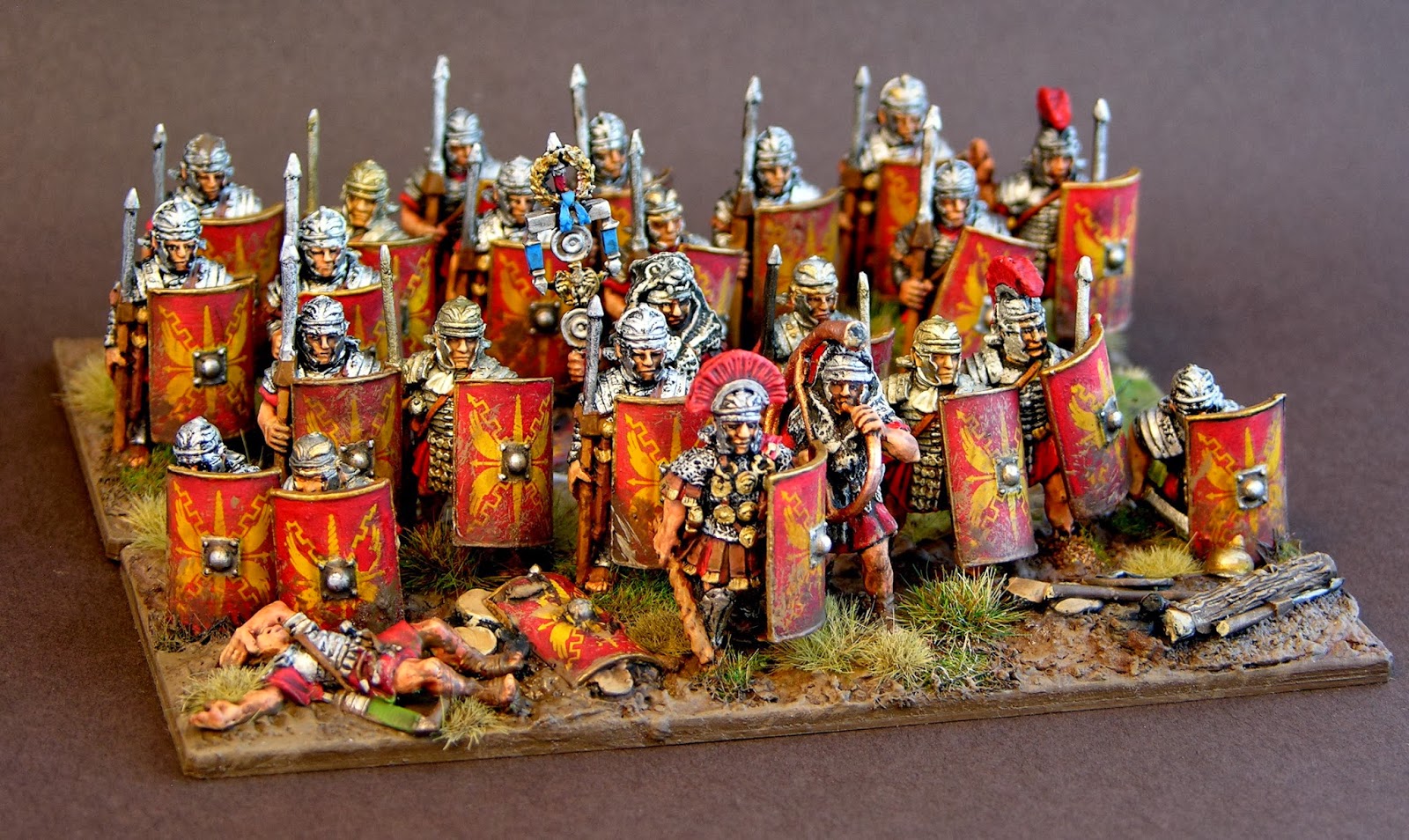 (the two completed test elements, together, form a battle-hardened Roman cohort for Impetus)

“I’m gonna drive everybody wild, ‘cause I’ll have the only one there is around”.

To sum up, I much prefer working with painted miniatures, compared to virgin metal, as I find that the different approaches adopted by other painters get my creative juices flowing, helping me to produce a uniquely characterful end result. Re-using such “pre-loved” minis, also enables me to get an army on the table far more quickly than if I had painted them from scratch!

(Since publishing the original article, I've completed another 4 elements of this force using some lovely figures that I bought off Saxon Dog.  I hope to have the army finished by the end of the Spring.)
Posted by BigRedBat at 10:53